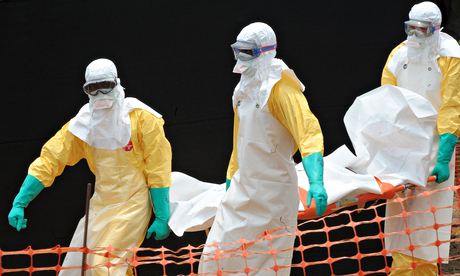 Doctors without Borders carry a body on a stretcher at a centre for victims of the Ebola virus in Guekedou, Guinea. Photograph: Seyllou/AFP/Getty Images

Late last month, villagers in Guinea's remote south-eastern region of Nzérékoré were greeted by a sight so alarming that many barricaded themselves indoors. A group of doctors dressed in protective suits and helmets were visiting the centre of an Ebola epidemic that has raged for six weeks.

"People were running away from the doctors who looked like cosmonauts on their way back from the moon. We have never seen anything like it. Some locked their doors, others hid themselves. It was frightening because there were all kinds of rumours about how this disease was spreading," said Bah Mamadou, a taxi driver.

It took two more days before his neighbours began to open their doors. Such reactions highlight the uphill battle facing officials and medics as they attempt to contain one of the world's rarest and most lethal viruses, which has claimed 84 lives in the outbreak and jumped borders to Sierra Leone, Liberia and Mali.

International organisations fear it could sweep across a region with weak public health services. "Prevention is the only way to contain the Ebola spread and we are desperately trying to get the message across. Posters, leaflets, radio, text messages and TV spots – we are resorting to every possible method to reach communities far and wide," said Berenger Berehoudougou, west Africa director of the aid organisation Plan International.

Officials from the US Centres for Disease Control and Prevention travelled to Guinea this week to offer help, after a scare in Canada when a citizen returning from Liberia fell ill and was initially thought to have been infected.

There have been five suspected Ebola fatalities in Sierra Leone. In Liberia, where a state of emergency has closed the border with Guinea, the government said this week that the latest of its nine victims had no known links to Guinea. "We have a case in Tapeta where a hunter who has not had any contact with anyone coming from Guinea got sick," the chief medical officer, Bernice Dahn, told AFP. "He was rushed to the hospital and died 30 minutes later. He never had any interaction with someone suspected to be a carrier of the virus and he has never gone to Guinea. This an a isolated case."

Described by virologists as a "molecular shark", Ebola is passed on through bodily fluids and causes extensive internal and external bleeding. The fruit bat, a delicacy in Guinea and Liberia, is a host of the virus. The World Health Organisation believes that the virus spread from Guinea's forested regions to the densely populated capital, Conakry, through one man who travelled 200 miles from the central town of Dobala.

"I know this will come as a complete shock but Revealed: Highland Park 'shooter who killed at…"
8 hours ago

"The west is preparing for war with Russia and China. It won't be a Sunday picknick though. A…"
9 hours ago

Doc Vega replied to Parrhesia's discussion Highland Park Illinois Parade Shooter
"The ultimate agenda behind all these shootings, take away our guns! it will continue until they…"
11 hours ago

Parrhesia commented on tjdavis's blog post Souled Out
"For those who don't believe that dark magic is being used against humanity, look at the…"
13 hours ago

Parrhesia commented on tjdavis's blog post Crafting US Policy From Afar
"The people who really create US policy aren't even elected - they are NGOs."
14 hours ago

"Stay off my turf!  Memories of my neighbor telling me the county installed property line…"
14 hours ago