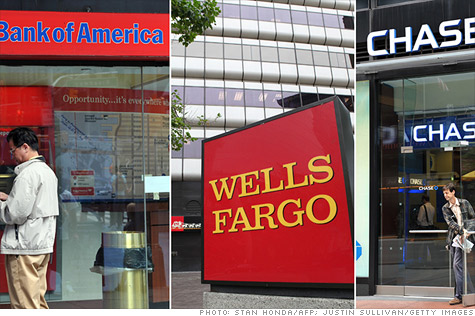 Bank of America, Wells Fargo, Chase and others have been hit with a massive cyberattack over the past two weeks.

NEW YORK (CNNMoney) -- There's a good chance your bank's website was attacked over the past week.

Since Sept. 19, the websites of Bank of America (BAC, Fortune 500), JPMorgan Chase (JPM, Fortune 500), Wells Fargo (WFC, Fortune 500), U.S. Bank (USB, Fortune 500) and PNC Bank have all suffered day-long slowdowns and been sporadically unreachable for many customers. The attackers, who took aim at Bank of America first, went after their targets in sequence. Thursday's victim, PNC's website, was inaccessible at the time this article was published.

Security experts say the outages stem from one of the biggest cyberattacks they've ever seen. These "denial of service" attacks -- huge amounts of traffic directed at a website to make it crash -- were the largest ever recorded by a wide margin, according to two researchers.

Banks get hit by cyberattackers all the time and typically have some of the best defenses against them. This time, they were outgunned.

"The volume of traffic sent to these sites is frankly unprecedented," said Dmitri Alperovitch, co-founder of CrowdStrike, a security firm that has been investigating the attacks. "It's 10 to 20 times the volume that we normally see, and twice the previous record for a denial of service attack."

"Hey thanks for your comments guys. I like to put up links to photos and blogs but when I looked…"
13 hours ago

steve replied to Sandy's discussion Nonbinary teacher boasts on changing students' genders without parents knowing: 'They need protection'
"This evil must be stopped, these fkn perverts are nothing but child predators and should be SHOT ON…"
14 hours ago

"Why is it that those who have the least power, not those who led us to die, are blamed. Many of us…"
18 hours ago

My job, which is a public service, is to protect kids… Sometimes, they need protection from their…See More
21 hours ago
1 Comment 0 Favorites

"The attacker, no details about him. Could it be a mental disorder like Islam? Oh but you can't…"
21 hours ago