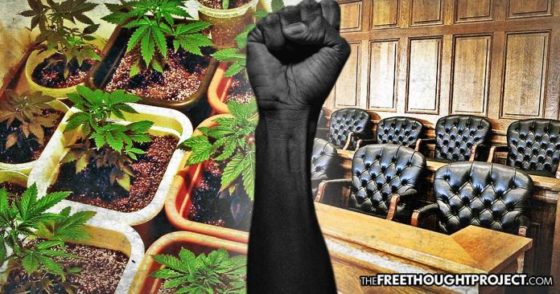 Laurens County, GA – Javonnie Mondrea McCoy is a medical marijuana patient in a state where the plant is still illegal and was recently in court facing charges of possession and manufacturing. McCoy grew cannabis for his own personal consumption to treat severe headaches and other pain that he has suffered since he spent two weeks in a coma in 2003 after being severely beaten.

McCoy’s lawyer, Catherine Bernard, said that McCoy is not the type of person who belongs behind bars.

“The jury appreciated his honesty throughout the case—including testimony at trial and statements to police—and recognized that a good, hardworking man living a quiet life and not bothering anyone didn’t deserve a felony conviction for his actions,” Bernard said.

This is just the most recent case of a jury nullification victory for cannabis users, but this strategy is becoming increasingly popular.

For those who do not know, jury nullification is basically the right for any juror to not only judge the facts of the case but to also actually judge the validity of the law itself. This means that if a jury feels that a defendant is facing an unjust charge, they actually have the right to rule in the defendant’s favor, even if they are technically guilty under the court’s standards.

Considering the fact that most of the nonviolent offenses on the books today are extremely unpopular for a variety of reasons, you would think that jury nullification would be household knowledge, or even taught in schools. However, this is a very well guarded secret, with many judges actually preventing the defense from informing juries of their right to nullify laws that they feel are unjust.

In fact, in 2016, New Hampshire House became the first state in the nation to consider a bill that would require courts to inform juries of their right to vote not guilty when the verdict would produce an unjust result.

Attorney Catherine Bernard could not be immediately reached for comment, but posts on her Facebook page suggest that the judge attempted to block her from discussing jury nullification in court.

“Today, I quoted Article 1, Section 1, Paragraph XI of the Georgia Constitution to the jury. The judge interrupted and told them it was ‘not a correct statement of the law.’ The judge took an oath to uphold that Constitution. What’s going on here?” Bernard wrote.

Forchion was passionate in the closing arguments of his 2012 trial, wearing a shirt that said “Marijuana … It’s OK. It’s Just Illegal,” and telling the jury that he had been munching on edibles throughout the whole trial. Then at one point, he was nearly held in contempt of court for trying to advance his jury nullification argument.

In the years since Forcion has faced constant harassment from the authorities and has been arrested on numerous occasions. Luckily, he was still able to win over the jury earlier this year when he was found not guilty after spending over 400 days in jail on trumped-up witness tampering charges, which were related to a prior marijuana case.

John Vibes is an author and researcher who organizes a number of large events including the Free Your Mind Conference. He also has a publishing company where he offers a censorship free platform for both fiction and non-fiction writers. You can contact him and stay connected to his work at his Facebook page. John just won a 3-year-long battle with cancer, and will be working to help others through his experience, if you wish to contribute to his treatments consider subscribing to his podcast to support.

Contributed by John Vibes of thefreethoughtproject.com.

For Monkey Werx gear and products, go to https://www.monkeywerxus.com/shopYou can help support the channel and watch live SITREPs at https://www.patreon.com/...
3 hours ago
0 Comments 0 Favorites

MAC replied to Ragnarok's discussion 15,000-year-old viruses discovered in Tibetan glacier ice
"I'm sure Hes on it, don't let a virus go to wast."
4 hours ago

"Don't be put off by the title of the video. The guy also discussed the grave, very grave…"
15 hours ago