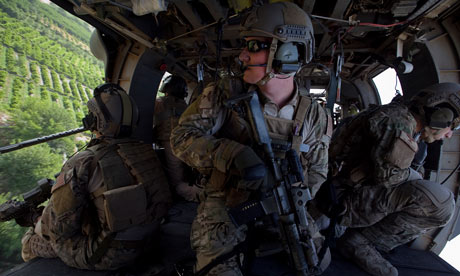 Medevac troops from the American 451st air expeditionary wing look out from their Pavehawk helicopter while heading to pick up casualties in Kandahar, Afghanistan. Photograph: Sean Smith for the Guardian

Soldiers could have their minds plugged directly into weapons systems, undergo brain scans during recruitment and take courses of neural stimulation to boost their learning, if the armed forces embrace the latest developments in neuroscience to hone the performance of their troops.

These scenarios are described in a report into the military and law enforcement uses of neuroscience, published on Tuesday, which also highlights a raft of legal and ethical concerns that innovations in the field may bring.

The report by the Royal Society, the UK's national academy of science, says that while the rapid advance of neuroscience is expected to benefit society and improve treatments for brain disease and mental illness, it also has substantial security applications that should be carefully analysed.

"Neuroscience will have more of an impact in the future," said Rod Flower, chair of the report's working group.

"People can see a lot of possibilities, but so far very few have made their way through to actual use.

"All leaps forward start out this way. You have a groundswell of ideas and suddenly you get a step change."

The authors argue that while hostile uses of neuroscience and related technologies are ever more likely, scientists remain almost oblivious to the dual uses of their research.

The report calls for a fresh effort to educate neuroscientists about such uses of the work early in their careers.

Some techniques used widely in neuroscience are on the brink of being adopted by the military to improve the training of soldiers, pilots and other personnel.

One study cited by the report described how US neuroscientists employed tDCS to improve people's ability to spot roadside bombs, snipers and other hidden threats in a virtual reality training programme used by US troops bound for the Middle East.

"Those who had tDCS learned to spot the targets much quicker," said Vince Clark, a cognitive neuroscientist and lead author on the study at the University of New Mexico. "Their accuracy increased twice as fast as those who had minimal brain stimulation. I was shocked that the effect was so large."

Clark, whose wider research on tDCS could lead to radical therapies for those with dementia, psychiatric disorders and learning difficulties, admits to a tension in knowing that neuroscience will be used by the military.

"As a scientist I dislike that someone might be hurt by my work. I want to reduce suffering, to make the world a better place, but there are people in the world with different intentions, and I don't know how to deal with that.

"If I stop my work, the people who might be helped won't be helped. Almost any technology has a defence application."

Research with tDCS is in its infancy, but work so far suggests it might help people by boosting their attention and memory. According to the Royal Society report, when used with brain imaging systems, tDCS "may prove to be the much sought-after tool to enhance learning in a military context".

One of the report's most striking scenarios involves the use of devices called brain-machine interfaces (BMIs) to connect people's brains directly to military technology, including drones and other weapons systems.

The work builds on research that has enabled people to control cursors and artificial limbs through BMIs that read their brain signals.

"Since the human brain can process images, such as targets, much faster than the subject is consciously aware of, a neurally interfaced weapons system could provide significant advantages over other system control methods in terms of speed and accuracy," the report states.

The authors go on to stress the ethical and legal concerns that surround the use of BMIs by the military. Flower, a professor of pharmacology at the William Harvey Research Institute at Barts and the London hospital, said: "If you are controlling a drone and you shoot the wrong target or bomb a wedding party, who is responsible for that action? Is it you or the BMI?

"There's a blurring of the line between individual responsibility and the functioning of the machine. Where do you stop and the machine begin?"

Another tool expected to enter military use is the EEG (electroencephalogram), which uses a hairnet of electrodes to record brainwaves through the skull. Used with a system called "neurofeedback", people can learn to control their brainwaves and improve their skills.

According to the report, the technique has been shown to improve training in golfers and archers.

The US military research organisation, Darpa, has already used EEG to help spot targets in satellite images that were missed by the person screening them. The EEG traces revealed that the brain sometimes noticed targets but failed to make them conscious thoughts. Staff used the EEG traces to select a group of images for closer inspection and improved their target detection threefold, the report notes.

Work on brain connectivity has already raised the prospect of using scans to select fast learners during recruitment drives.

Research last year by Scott Grafton at the University of California, Santa Barbara, drew on functional magnetic resonance imaging (fMRI) scans to measure the flexibility of brain networks. They found that a person's flexibility helped predict how quickly they would learn a new task.

Other studies suggest neuroscience could help distinguish risk-takers from more conservative decision-makers, and so help with assessments of whether they are better suited to peacekeeping missions or special forces, the report states.

"Informal assessment occurs routinely throughout the military community. The issue is whether adopting more formal techniques based on the results of research in neuroeconomics, neuropsychology and other neuroscience disciplines confers an advantage in decision-making."

Ah, Gods.  The peaceful applications!  I can see M'self sunning on the patio, directing the housekeeper cleaning the bathroom!

Take away the profit motive for war and We will have no wars.  Release free energy!  Sign My petition:

"Here's one of their demons.(caution-eye bleach worthy& turn down volume) this is truly…"
4 hours ago

cheeki kea commented on Bob Renner's status
"Great song. Very informative for rap fans and everyone else. "
18 hours ago