Obama Met Dr. Tedros and Terrorist Leaders of Ethiopia in 2014 – Then In 2017 Tedros Elected Head of WHO

US Cannot save Ethiopia from Tigray-Peoples-Liberation-Front 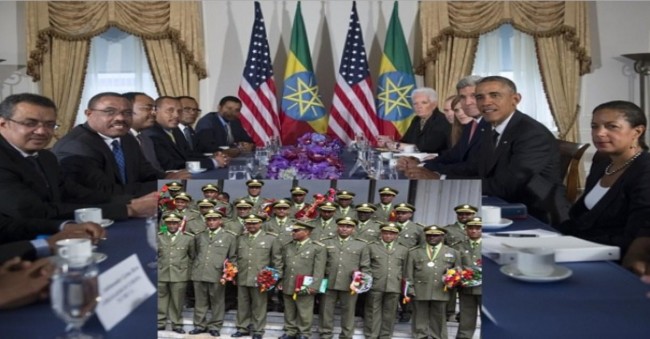 by Amanuel Biedemariam | Does Ethiopia need saving and why? For those that follow the region closely, the signs are clear that Ethiopia faces imminent instability. Absent of divine intervention there appears no credible movement that can bring peaceful change in Ethiopia. The people of Ethiopia tried for years unsuccessfully to have their voice expressed at the ballot box and found it impossible.

In its response to Somalia Eritrea Monitoring Group (SEMG) Ginbot7 one of Ethiopia’s leading opposition groups wrote, “Ginbot7 was formed as a political movement in order to advance justice, freedom, and liberal democracy in Ethiopia. Ginbot 7 believes that no meaningful and genuinely competitive elections can take place in the country due to the prevailing and ever worsening egregious human rights violations, the closing of political space, the harassment and persecution of members of the legal and peaceful political opposition. Furthermore, an entrenched minority ethnocratic dictatorship in Ethiopia has determined to perpetuate its hold on power by all and any means necessary.”

The Tigray People’s Liberation Front (TPLF) remains hell-bent on staying in by power means by any necessary. This dichotomy has been pulling the nation apart for some time. These and other factors are threatening to splinter Ethiopia in ways that can re-shape the geopolitical, strategic makeup of the region and influence US policies in many ways. The latest “Ginbot-7-tplfs-minority-ethnic-monopoly-of-the-armed-forces-in-Ethiopia” report on moral of the Ethiopian military personnel and, leadership composition states,“There is widespread discontent among the regular army as well as rank and file officers that is predominantly drawn from the large non Tigrean ethnicity some of whom are referring to themselves as becoming slaves to a Tigrean dominated system. For several years now there is widespread and simmering discontent with this domination but questions related to these issues are not normally raised or discussed in public, for fear of prosecution.”

The report continues, “According to this survey, the existing military governance system is highly skewed to one minority ethnic group, TPLF Tigrians. In general, the survey indicates that the system being followed by the current TPLF government is comparable to the old colonial and apartheid military organization systems, which now have become relics of history.” The South African (SA) apartheid era army was considered amongst the most powerful in the world. The countries in the region posed no threats to it. The SA military was full of black South African mercenary foot soldiers that brutalized their kind. Similarly, the TPLF army’s core leadership is from Tigray when the majority of Ethiopian armed forces are comprised from other ethnic groups. And like the SA army the TPLF uses the military as mercenary forces that use brute force to quell revolt. History shows that the apartheid army of SA failed and as such the TPLF minority clique will fail. The difference however, unlike the South African army which was established, independent, rich and possessed nuclear armaments, the TPLF army is very-dependent on aid, beset by internal and external threats and when it fails will take the country down with it. Ethiopia is mired with-inner conflicts that are artificially-muzzled with brute force, intimidation, coercion, bribes etc… Recent Amnesty International report details repression and brutality the Oromos face. Currently Ethiopia faces simmering conflicts in the South with the Oromo, in the west the Benishangul, in the East the Ogaden, in central Ethiopia with the Amhara’s and in the north with the Tigray People’s Democratic Movement TPDM. The conflicts Ethiopian (TPLF) forces are engaged-in are directed against the people in all regions of Ethiopia. The TPLF does not represent the people or the interests of the people; they are interested-only, to hold-on to power by any means necessary. The aspirations of the people are immaterial to the TPLF.

On the other side, the struggles and conflicts the people of Ethiopia wage are directed against the minority clique from Tigray TPLF-lead apartheid army. The TPLF cannot exist in peace based on democracy and with-in a united Ethiopia. It needs constant state of conflict to survive. To that end, soon after assuming power 1991, TPLF divided Ethiopia based on Ethnicity, handed every region flag and declared Article-39 which gives every ethnic-region the right to self-determination and right to declare independence, setting the template for division. Ethiopia faultiness is not limited to ethnic divisions. The TPLF is not afraid to use religion for political or financial gain from the West. The TPLF has been instigating conflicts with Ethiopia’s religious communities for a while. Ethiopia’s Muslims have over the last 6 years, demonstrated in huge numbers citing various grievances.

These simmering tensions are alive in all aspects of Ethiopia’s political, economic, social, ethnic, military and other-life threatening the very existence of the nation. The massive land leasing/sales program the TPLF is engaged-in is displacing Ethiopians in large numbers further escalating tension between indigenous Ethiopians and the ethnic minority Tirayans led by TPLF which is using brute force to push populations out of their land. Unfortunately, Ethiopia’s existential threats are not only confined to its borders. Irrational, short-sighted adventures have made the TPLF a regional pariah thus target. The TPLF clique is from Tigray, Northern Ethiopia.

Since 1991, they have worked as mercenary foot soldiers of the West and engaged in conflicts with countries in the region pursuant of Western interests in the name of Ethiopia and at the expense of the interest of the countries thus people of the region. The TPLF was propelled to power by Eritrea. As soon as they were able however, made Eritrea their first target, waged a devastating wars and created seemingly insurmountable-permanent state of conflict called, “No Peace No War” designed to weaken Eritrea into submission. The TPLF miscalculated by assuming it will take 6 months for Eritrea to fold. It declared regime change, recruited individuals and groups and committed aggressions. They trained terrorists, established government(s) in exile, recruited regionalist, religious extremists, susceptible individuals and declared war to topple the government of Eritrea. The TPLF has been openly hostile to Eritrea while crying wolf and occupying sovereign Eritrean territories in violation of international laws. However, the opposite became true. Eritrea’s resilience has turned the table on the TPLF.

The genocidal dictator Meles Zenawi is dead and the No War No Peace agenda he put on place has become an albatross that it could not dislodge. The adventurism of Ethiopia continues unabated. In 2006, the TPLF committed another huge blunder when it invaded Somalia a sovereign nation in violation of international laws under the pretext of fighting terrorists and extremist Muslims and destabilized Somalia. Eight years later, after loses of countless lives and distraction, Somalia is in worse position. Ethiopia, touted by the West as Christian nation, invaded an Islamic state on Christmas and nurtured unnecessary enmity with the people of Somalia.

The TPLF adventures have placed Ethiopia at odds with Egypt by playing politics with the Nile which poses existential threat for the people of Egypt. Recently, at the behest of the US, the TPLF attempted a regime change-heist in South Sudan (SS). The attempt threatened the lives of the leaders and perpetuated the instability in SS. It also placed Ethiopia at odds with SS with long term security implications. The SS leaders took some major steps to protect their interests. They opted-out of the mediation held in Ethiopia, demanded negotiations moved to Tanzania, reaffirmed their commitments to China, and signed military agreements with Uganda and Egypt. This agreement gives Egypt backdoor to Ethiopia. The SS have also expressed their discontentment with Inter Governmental Authority on Development (IGAD) a regional organization that Ethiopia controls and uses for sinister motives and minimized Ethiopia’s place in it. As a host nation of the African Union, when dealing with African matters, Ethiopia was supposed to play a neutral role. By overplaying its hand the TPLF damaged Ethiopia’s future roles as neutral location for Africa. Many factors could propel abrupt change. Ethiopia is the second poorest nation in the world prone to famine and other calamities. Addis Ababa is beset by power outages and the streets are littered with beggars. Recent reports placed the number of orphans at 4.5 million, which is 5% of the total population. Ethiopia remains heavily indebted and it depends on foreign aid which makes-up-to 97% of its annual budget. Ethiopia receives aid primarily because it serves as a foot soldier to western interests. When the West decides they cannot pursue their interests through Ethiopia it is unlikely that the aid will be forthcoming at the current level.

Additional regional developments could divert western attention away from Ethiopia. For example, recent developments in Yemen could play game changing role. These developments can influence events in Saudi Arabia; change how the US acts in the Baab Al Mendeb, Indian Ocean and the Red Sea; it can change US stances in Djibouti for budgetary or other reasons. These and other factors can influence western decision makers on how they finance Ethiopia. When they do the TPLF is effectively done because it depends on Western aid for its life. Conclusion The situation in Ethiopia is unsustainable by all standards. Ethiopia is a pressure cooker. The central government is wrapped by destabilizing factors inside and outside the country. Anything can spark unrest thus instability in Ethiopia. Instability in Ethiopia will spell disaster for Western presence and influence. It will wreak havoc and become a breeding ground for terror and extremism that will influence the region and beyond.

The consensus has been that Ethiopia is large and strong. That perception is serving the people of Ethiopia poorly because it shields the vulnerabilities-the-reality from the international community and denies Ethiopians real solutions. The West and particularly the US has so far been irresponsible in the way they manage Ethiopia. Their actions belie the undercurrent that will engulf the nation and by extension the region. Ethiopia is a ticking bomb ready to explode and almost too late for anyone to save it from its own misdeeds. It will spell disaster if the US fails to change direction. The atrocities the people of Ethiopia and especially Tigray could face will be devastating long term. Awetnayu@hotmail.com Esat Scores-die-in-southern-ethiopia-due-to-a-conflict-between-mezhenger-and-highlanders, Ethiopia’s armed forces are comparable to the apartheid military structures of the past.

US Cannot save Ethiopia from Tigray-Peoples-Liberation-Front | horn... Doc Vega commented on Chris of the family Masters's blog post Game Over
"One of the reasons California is in drought mode, they rerouted a fresh water river into the ocean.…"
51 minutes ago

"https://www.onlinevisa.com/visa-policy/russia/  I think a lot of holiday travellers would like…"
2 hours ago

"Hey Less,  Demons or evil thrive on carnage but mostly FEAR that is their fuel/energy. Most of…"
4 hours ago