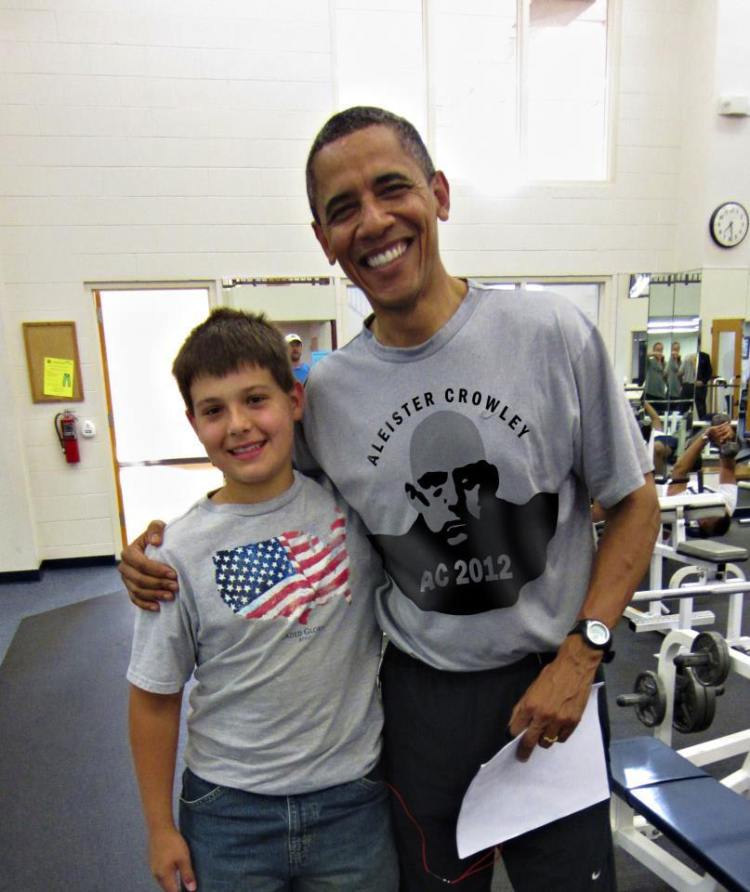 Please notice the Aleister Crowley T-Shirt Obama is Wearing!   This is Very Telling, that Obama supports one of the Most Evil of Britain.

On November 19th, the entire posts, reposts, and comments were totally scrubbed by social media networks.and outlets. That evening he appeared on Full Contact with Eric Rush.

You can see his scrubbed messages to Facebook here:

Three individuals have just saved 300 million lives in the past 2 weeks. They saved the 90% of the population that would be dead if Bathhouse Barry had not been stopped from using 3 nuclear devices against the American populace. 2 Army Generals and 1 Navy Admiral, whose duties included the safeguarding and oversight of the nuclear arsenal. Obama ordered that 3 nukes be transported in a major breach of protocol and safety regulations of long standing. He wanted it NOW, and these officers were made aware of what the intention was. The admiral had the one Navy nuke taken 200 miles off South Carolina and detonated deep in the ocean. The other 2 nukes disappeared thanks to the handiwork of the 2 Generals, the numbers 1 and 2 men in charge of the Army ordinance. These three men are heroes of the highest order. Look up the events of 2 Generals and 1 Admiral being dismissed in the past two weeks and you will find their names. They saved your lives and the lives of 300 million of your fellow citizens.

Mr. Obama’s intention was to set off the three nukes to devastate all computer related systems on the continent thus taking America back 200 years and guaranteeing a total breakdown in society and with in one year the death of 300 million Americans. To see how this would be possible read, “One Second After”. You can get it on Amazon.

We peered over the edge of the precipice of the death of our civilization and have lived to tell the tale. 3 heroes stood tall for America and the mad man in the white house was stopped for the first time in his life. He is unsure of what to do just now and he does not possess the keys to the nuclear submarines nor the two nukes that are now hidden. For the first time in his life someone said no, meant it, and stopped him from murder and devastation. The next few days are critical. Be afraid and go to prepper sites to find out how to save your family, if you can. – Dr. Jim Garrow, Nov. 18, 2013

In the condominium complex in Casa Grande, Arizona, where I have a unit, a visit was made yesterday by a group of 4 men in a black Suburban with lots of antenna’s on the roof. The management of our large group of condo’s was asked to open the door of my unit. The badges were a combination of many different alphabet agencies including my former one. Interesting because after I posted about EMP’s and missing nukes my phone rang late in the evening and I was requested to cease and desist. My posts have been removed. I am not however repentant, nor cowed. If anything like this happens again I have instructed people to begin the release of documents and information as per prepared plans in the hands of these people. Obama is known for overplaying his hand, and now should be known far and wide as a dangerous amateur. He may have gotten Breitbart, Hastings and Clancy, but they were just writers. I hope that he enjoys the protests today in DC. – Dr. Jim Garrow, Nov. 19, 2013

A quick search on the internet latter and you can indeed find three Military Men that dealt in Nuclear Arms dismissed in October. Major General Michael Carey and Vice Admiral Tim Giardina (fired amidst rumors of misbehavior involving alcohol and gambling) were both released, then a third one from the Pacific that never made it home. There was also a sizable earth quake off the coast of South Carolina that Russia Claims was an underwater explosion of an American Thermal Nuclear Device.

Charles - Yes Bath-house Barry is psycho-boy.  Thanks for posting this.  I had posted the same article but it didn't get much attention.  We have "Idi Amin" at the wheel.

I remember that dictator Idi Amin!  What a Nasty Fucker!! But he still Murdered less than Obama!!!

sounds like one tall tale, would need @ least one of these to come forward before I fell for it ;)

Do you remember that Guy who was Saying there was going to be a nuclear attack and he was saying it would be Either Syria or Iran doing it, he was doing the Ground work for the Blame Game. What the hell was his name??  Well, the Decent Military men did managed to Stop the Nukes.   Obama was involved in the Set up.  I remembered it at the time it was happening.  I thought it would have been plastered all over this site?

there were some blurbs about it back in Oct, think i posted sumfin bout it, but never saw any hard evidence or anybody credible actually coming forward, so me thinks its fantasy or dis-info

What purpose would it serve?  The Cabal is only interested in covering up something like this, not publicizing it.

When reasoning here we will need many levels of certainty. Either something is true, otherwise it is false, will not work.

Most of the Post would have disappeared by now.  but there was a great deal of stuff happening at that time, something to do with the Military trying to Arrest Obama. but soldiers ended up being shot.

That is the Worst Idea in America's History!!  Get the Fucking Zionist Parasites out of Any high Office in the USA!   They should all be sent to MacDonalds as Crew members only, not Management!!

To escape responsibilities they need name change, cosmetic surgery and destruction of paper trail. Otherwise they are sitting ducks in next World War Armageddon. Disappearing underground some years - or Patagonia - is best option?

they would be the Morlocks in the Time machine Movie. I would never want to see a world with them in it any longer.

Our thoughts on the newly discovered "rule" that prohibits video recording in National Parks, and uploading it to YouTube channels that are monetized.
9 hours ago
0 Comments 1 Favorite

steve replied to MAC's discussion Jordan Peterson’s Plan to DESTROY The World Economic Forum!!!
"son of peter or dickhead as we call his kind wants to attack iran also pushed the jabby jab and…"
18 hours ago

steve commented on tjdavis's blog post Pfizer Creating Mutations
"Here is how we all should respond to these MUDERERS. Steve A RIGHTFULLY BLOODY ANGRY LADY…"
21 hours ago

NATO and Western countries do not want peace in Ukraine. In fact they are actively and openly talking about soldiers and boots on the ground. Putin just issu...
22 hours ago
0 Comments 0 Favorites