In a scientific first, cloned monkeys are born. Will they accelerate biomedical research? 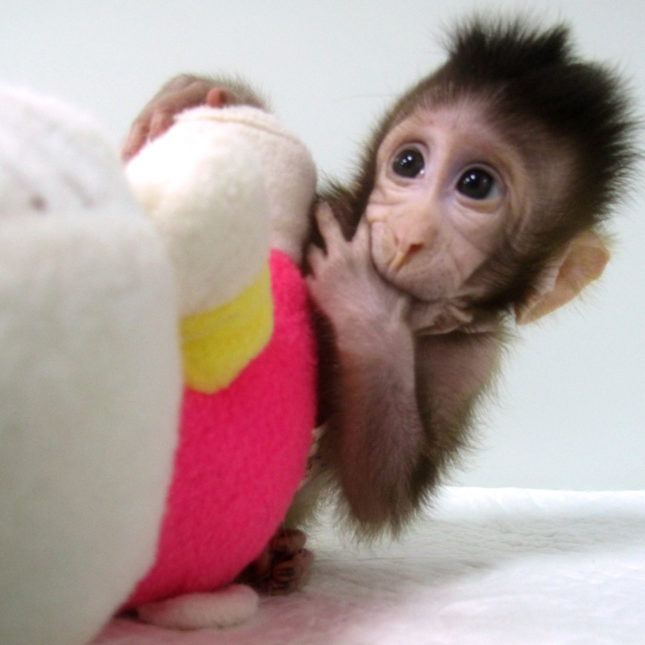 There have been mice and cows and pigs and camels, bunnies and bantengs and ferrets and dogs, but ever since Dolly the sheep became the first cloned mammal in 1996, the list has had a conspicuous hole: primates. Now that hole has been filled.

Scientists in China reported on Wednesday in Cell that they had cloned two healthy long-tailed macaque monkeys from the cells of another macaque, using the Dolly technique. The two clones, born 51 and 49 days ago, were created from a fetus’s cells; so far, the scientists have not been able to make the tricky procedure work when they used cells from adult macaques. That would seem to postpone the dystopian day when cloning children and grown-ups becomes as mainstream as IVF. But because “the technical barrier [to cloning primates] is now broken,” co-author Mu-ming Poo of the Institute of Neuroscience in Shanghai told reporters, the technique “could be applied to humans” — something he said his team has no intention of doing and sees no reason for.

Cloning pioneers said the monkey clones represented, as Dr. Robert Lanza put it, “an impressive breakthrough, which overcomes the last major hurdle in the field.” Lanza co-led teams that cloned a gaur in 2000 and in 2014 used the Dolly technique to produce human embryos (but not pregnancies) from the cells of an adult.

Before this, “no one was able to produce living offspring” through primate cloning, said Shoukhrat Mitalipov, of Oregon Health and Science University, who in 2013 also used the Dolly technique to create human embryos (technically, blastocysts) from the cells of an 8-month-old. (He did not use the embryos to create pregnancies either.) “These guys made it work, which is quite an achievement.”

The cloning team said its breakthrough might one day be used to produce genetically identical monkeys for biomedical research. Most of the lab animals used to study diseases, from cancer to Alzheimer’s, are highly inbred mice. But mice don’t get every human disease or don’t get it the way people do. Mice genetically engineered to express the human cystic fibrosis gene, for instance, don’t develop that disease’s characteristic lung problems, and mice don’t mimic human neurological and psychiatric diseases such as schizophrenia and autism very well.

If monkey clones can be created routinely, they can also be genetically altered, one gene at a time, with techniques such as CRISPR. “You can produce cloned monkeys with the same genetic background except the gene you manipulated,” senior scientist Qiang Sun told reporters. “This will generate real models not just for genetically based brain diseases, but also cancer, immune, or metabolic disorders.”

Postdoctoral fellow Zhen Liu spent three years optimizing the Dolly recipe for primates. Called somatic cell nuclear transfer (SCNT), the technique involves fusing a somatic cell — meaning anything other than a sperm or ovum — with an egg whose nucleus has been removed. (Zapping the egg with laser light helped, Liu found.) An hour or two later he used two chemicals to faux-fertilize the egg (no sperm needed), spurring it to start developing into an embryo.

The DNA in the somatic cell took over. As the egg divides and divides, the resulting embryo is a genetic copy of the animal the somatic cell came from. If transplanted into a surrogate mother, it develops into a fetus and, if all goes well, a newborn. In reality, no one had managed to get live births of cloned primates. A big stumbling block was that DNA from the somatic cell resisted reverting to its embryonic state where it is able “to express all the genes needed for embryonic development,” Poo said.

“Most of the time the SCNT eggs don’t even produce an embryo,” Mitalipov said. But the Shanghai team produced hundreds of cloned monkey embryos, thanks to two chemicals: adding one called trichostatin A while and after the ovum was faux-fertilized, and then a molecule called Kdm4d once embryos formed. Together they reprogrammed the donor DNA, awakening genes needed to produce an entire organism. That increased the percentage of SCNT eggs that developed into embryos, and also improved the embryos’ quality, making them more like naturally fertilized eggs.

The efficiency was still very low. Trying to produce clones from adult monkey cells, the scientists got 192 embryos from 290 tries, with 22 pregnancies and two monkeys born alive; both died within hours. Using cells from fetuses, they got 109 embryos from 137 tries, six pregnancies, and two live births. They are Zhong Zhong and Hua Hua, both females and, since they came from cells of the same monkey, identical twins. “Zhonghua” means Chinese nation.

Experts disagree on whether, as the Chinese scientists argue, monkey clones would accelerate biomedical progress.

“There is a strongly held belief that monkeys will be better models because of greater similarities in brain and behavior,” said neuroscientist Robert Desimone of the Massachusetts Institute of Technology and director of the McGovern Institute for Brain Research. “Too many failed clinical trials [of neurological and psychiatric diseases] in humans have been based on mouse models that turn out to be not predictive.”

Because humans share more of their DNA with primates than mice, cloning monkeys “opens up new possibilities for studying the genetic basis” of human traits and behaviors, Lanza said. “For instance, if there is one monkey that really likes to drink, and if scientists could clone it, they could find out whether [the behavior] has a genetic basis.”

On the other hand, although “you’d have to think that effects on higher [brain] functions would be more realistic in a [monkey] model, you’re still faced with the extreme difficulty of figuring out just what those effects are,” said Derek Lowe, a pharmaceutical chemist and blogger. “A monkey can’t tell you that he’s feeling a bit fuzzy, or is hallucinating. How would you pick up a side effect of suicidal ideation, for example? Or how would you be sure that a monkey is depressed, as opposed to (say) just mildly nauseated or tired all the time?”

Nor is it clear if cloned monkeys would be better than monkeys that are genetically diverse, like people. Clones might respond to experimental drugs or genetic manipulation more uniformly, producing cleaner experimental results. But genetic sameness might backfire, said Nadia Rosenthal, scientific director of the Jackson Laboratory, whose inbred mice are used by scientists around the world: Results on genetically uniform mice often apply only to that strain, not others, making them problematic models for studies that aim for broad, robust conclusions on, for example, “effects of mutations, diets, toxins, or drugs.” To mimic humans, she said, “we need more genetic diversity, not less.”

Regular monkeys, not clones, “may more closely model the genetic variability in humans,” agreed MIT’s Desimone. “It is important to eventually understand the role of a variable genetic background.” If cloned monkeys were available, he added, “I am sure that some drug companies and some primate researchers would want to try them. … I see the cloning as a positive development with potential applications, although not transformative.”

Two important obstacles to more widespread biomedical use of monkeys, cloned or not, are ethics and cost. Using monkeys in biomedical research is “far more expensive, difficult, and morally fraught” than using rodents, said Lowe. And primate research has seen “egregious ethical violations,” said Dr. John Pippin of the Physicians Committee for Responsible Medicine, which supports alternatives to animal research. Monkeys’ dissimilarities to humans, including in brain structure, function, and genetics, makes them poor models for complex human psychiatric diseases, he said, and cloning monkeys “expands the ethical objections” if it increases the research use of humans’ closest relatives.

Zhong Zhong and Hua Hua are growing normally and playing in their toy-filled enclosure. More monkeys are pregnant with clones, with due dates in the coming months. Some were created from adult, not fetal, cells.

I wonder if they have the old David Rockefeller's and Rothschilds' DNA stored for future cloning. Oh, what a wonderful world.

I was thinking the same thing...

And in answer to the articles question "Will they accelerate biomedical research?"

The short answer is no - but the fact that the Chinese have announced this, means that all the cloning bio-tech that has been weaponized is close to or ready to be rolled out.

"LORD, Please help me to remain a so called RAAAAACIIIIIIISSSTT so that I may enjoy what I was BORN…"
13 hours ago

Larry Flinchpaugh commented on Larry Flinchpaugh's blog post Will Smith’s Movie Production Leaves Georgia Over Voting Law, Gets Hit With Karma
"“At this moment in time, the Nation is coming to terms with its history and is attempting to…"
13 hours ago