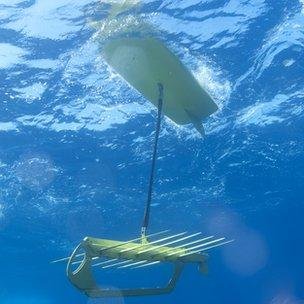 The robots are composed of two parts, and propel themselves forward without any fuel

The drones are taking part in a project to gather data about the composition and quality of sea water.

Built by US-firm Liquid Robotics, the PacX Wave Gliders are expected to cover 9,000 nautical miles (16,668km) by their journey's end.

The first leg of their voyage from San Francisco to Hawaii took four months.

The robots are designed to reach previously inaccessible areas of the ocean and gather data on how acidic the water has become and the shrinking size of fish stocks.

The previous Guinness World Record for the longest distance covered at sea by an unmanned device was 2,500 nautical miles (4,630km).

steve replied to steve's discussion REAL IMPORTANT PLEASE WATCH AND PASS TO ALL NON SHEEPLE
"Chris It must be on your end, it still works fine from W Va. Steve"
18 hours ago