THIS LEAKED HILLARY CLINTON MEMO KILLED HALF A MILLION PEOPLE

A Hillary Clinton memo that Wikileaks made public in 2016 has not gotten the attention it deserves. It takes us back to 2012 and the early phase of the Syrian war.

At that point, it was largely an internal affair, although Saudi arms shipments were playing a greater and greater role in bolstering rebel forces.  But once the Obama administration decided in favor of intervention, the conflict was quickly internationalized as thousands of holy warriors flooded in from as far away as western China.

The 1,200-word memo by then-Secretary of State Clinton begins with the subject of Iran, an important patron of Syria.

She dismisses any notion that nuclear talks will stop Iran “from improving the crucial part of any nuclear weapons program—the capability to enrich uranium.”  If it does get the bomb, it goes on, Israel will suffer a strategic setback since it will no longer be able to “respond to provocations with conventional military strikes on Syria and Lebanon, as it can today.” Denied the ability to bomb at will, Israel might leave off secondary targets and strike at the main enemy instead.

Consequently, Clinton argues that the U.S. should topple the Assad regime so as to weaken Iran and allay the fears of Israel, which has long regarded the Islamic republic as its primary enemy.  As the memo puts it:

Bringing down Assad would not only be a massive boon to Israel’s security, it would also ease Israel’s understandable fear of losing its nuclear monopoly.  Then, Israel and the United States might be able to develop a common view of when the Iranian program is so dangerous that military action could be warranted.”

This document making the case to arm Syrian rebels may have been largely overlooked because of the dates, which appear to be inaccurate.

One line gives the time as “2001-01-01 03:00” even though Clinton was still a New York senator-elect at that point. That date is also out of synch with the timeline of nuclear diplomacy with Iran.

Another contains a State Department case and document number and a date of Nov. 30, 2015.  But that’s incorrect as well since it postdates Clinton’s resignation as secretary of state by better than two and a half years.

CENTRAL TO THE GREAT DEBATE

Consequently, anyone stumbling across the memo in the Wikileaks archives would have no idea of how its rather loopy logic figures in the great debate about whether to use force to bring down Syrian President Bashir al-Assad.  But textual clues provide an answer.  The second paragraph refers to nuclear talks with Iran “that began in Istanbul this April and will continue in Baghdad in May,” events that took place in 2012.  The sixth invokes an interview with CNN’s Christiane Amanpour conducted with then-Israeli Defense Minister Ehud Barak “last week.” Since the interview took place on April 19, 2012, the memo can, therefore, be dated to the fourth week in April. This is shortly before Clinton joined forces with then-CIA Director David Petraeus to push for an aggressive program of rebel military aid.

Needless to say, Clinton’s skepticism about negotiating with Iran proved to be unwarranted since Iran eventually agreed to shut down its nuclear program.  The memo thus illustrates her hawkishness along with her conviction that Israeli security trumps all other considerations even if it means setting fire to a region that’s been burned over more than once. 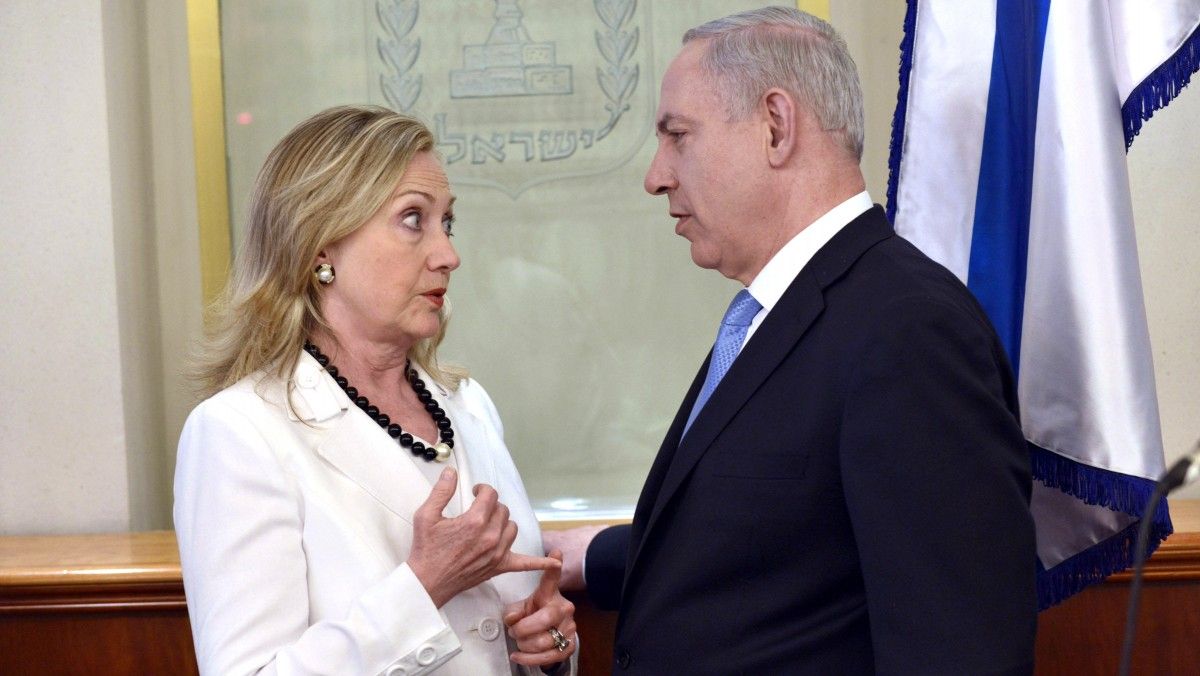 But the memo illustrates much else besides: Clinton’s recklessness, her lack of realism and her almost mystical belief that everything will fall neatly into place once the United States flexes its muscle.  Overthrowing Assad would be nothing less than “transformative,” she writes:

“…Iran would be strategically isolated, unable to exert its influence in the Middle East.  The resulting regime in Syria will see the United States as a friend, not an enemy. Washington would gain substantial recognition as fighting for the people in the Arab world, not the corrupt regimes.  For Israel, the rationale for a bolt from the blue attack on Iran’s nuclear facilities would be eased.  And a new Syrian regime might well be open to early action on the frozen peace talks with Israel.  Hezbollah in Lebanon would be cut off from its Iranian sponsor since Syria would no longer be a transit point for Iranian training, assistance and missiles.”

It was “a low-cost high-payoff approach,” she writes, that would eliminate one enemy, weaken two more, and generate such joy among ordinary Syrians that peace talks between Damascus and Tel Aviv will spring back to life.  The risks were nil.  Since “the Libyan operation had no long-lasting consequences for the region,” the memo says, referring to the overthrow of strongman Muammar Gaddafi six months earlier, the Syrian operation wouldn’t either:

Some argue that U.S. involvement risks a wider war with Russia.  But the Kosovo example [in which NATO bombed Russian-ally Serbia] shows otherwise.  In that case, Russia had genuine ethnic and political ties to the Serbs, which don’t exist between Russia and Syria, and even then Russia did little more than complain. Russian officials have already acknowledged they won’t stand in the way if intervention comes.”

So, there was nothing to worry about. Sixty-five years of Arab-Israeli conflict would fall by the wayside while Russia remains safely marginalized.

HOW IT TURNED OUT

Needless to say, that’s not how things turned out.  At that moment, Libya seemed under control.  But three or four months later, it would explode as Western-backed Islamist militias blasted away at one another, imposing strict Sharia law, re-instituting slavery and rolling back decades of social progress.  Once President Barack Obama approved a modified version of the Clinton-Petraeus plan, Syria would plunge into the same abyss as jihadis funded by Saudi Arabia and the other oil monarchies spread sectarian violence and fear.

Clinton’s assumption that the U.S. could neatly and cleanly decapitate the Syrian government without having to worry about broader consequences was little short of deluded.

The notion that ordinary Syrians would fall to their knees in gratitude was ludicrous while her disregard for the intricacies of Syrian politics was astonishing.

Then there’s the memo’s blithe suggestion that Washington “work with regional allies like Turkey, Saudi Arabia, and Qatar to organize, train, and arm Syrian rebel forces.”

In late 2009, Clinton wrote in another diplomatic memo made public by Wikileaks that “donors in Saudi Arabia constitute the most significant source of funding to Sunni terrorist groups worldwide.”  So what made her think two years later that the kingdom would not fund Syrian jihadis of precisely the same ilk? 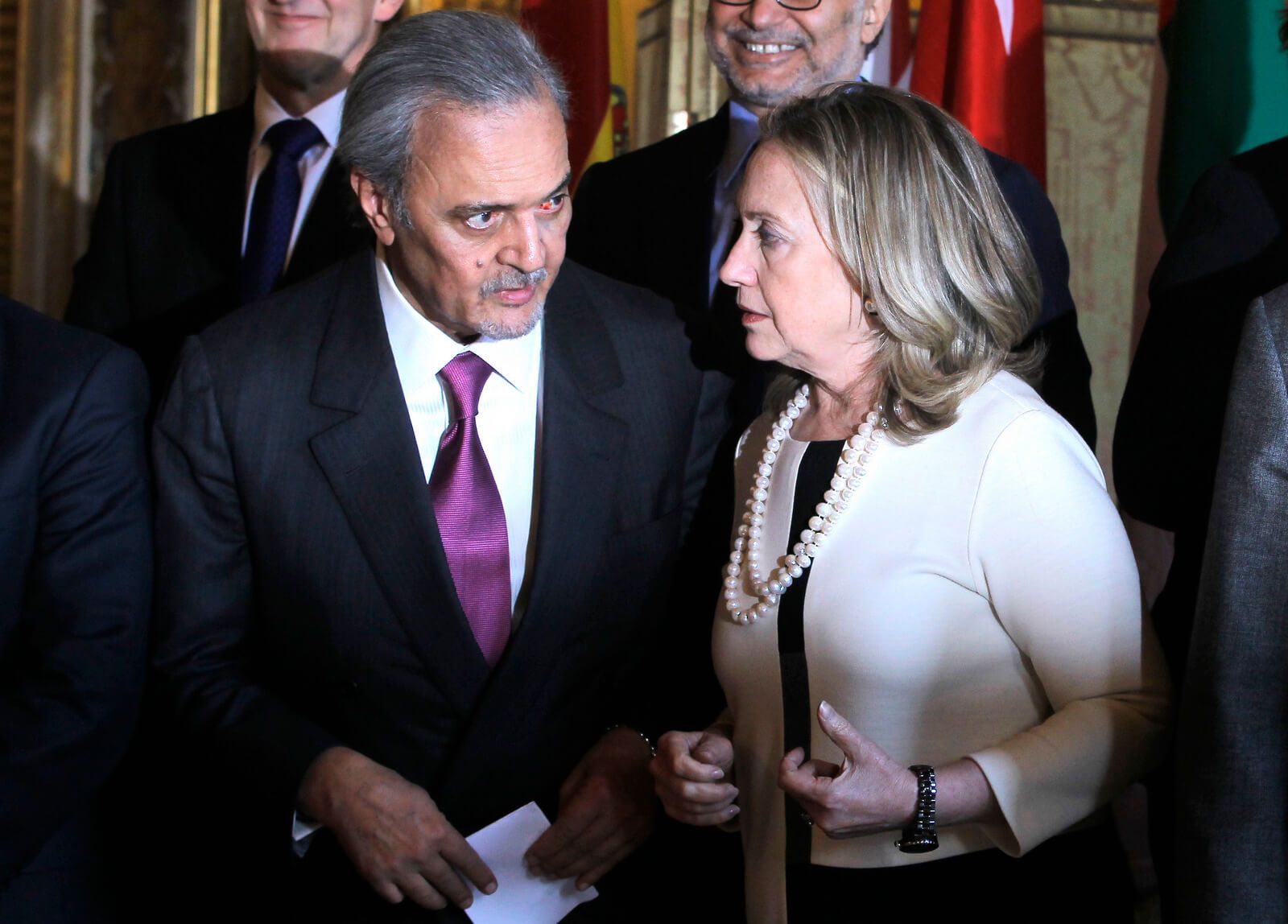 The 2009 memo slammed Qatar for allowing Al Qaeda, the Taliban, and other terrorist groups to use the sheikdom “as a fundraising locale.”  So what made her think that a pro-Al Qaeda autocracy would now help Syrians “fight for their freedom,” as the memo puts it?  Wouldn’t Qatar be more likely to remove what little freedom Syrians had left? Of course, it would.

There is remarkable continuity between the Syria policy that Clinton was proposing and earlier policies in Afghanistan and Libya.  In the first, U.S. military aid wound up flowing to the notorious warlord Gulbuddin Hekmatyar, a religious sectarian and raging anti-western xenophobe who nonetheless was “the most efficient at killing Soviets,” as Steve Coll put it in “Ghost Wars,” his bestselling 2004 account of the CIA’s love affair with jihad.

Hekmatyar’s cutthroats wound up with the lion’s share of American arms. More or less the same thing happened in Libya once Clinton persuaded Qatar to join the anti-Gaddafi coalition.  The sheikhdom seized the opportunity to distribute some $400 million to various rebel militias, many of them Islamist.  The Obama administration said nothing in response.

Once again, U.S. arms and materiel flowed to the most reactionary elements.  The same would happen in Syria where U.S. and Saudi arms went to the local Al Qaeda affiliate, known as Jabhat al-Nusra, and even to ISIS, as a meticulous report by Conflict Armament Research, a Swiss and EU-funded study group in London, has shown.  (See “Did Obama Arm Islamic State Killers?” Consortium News, Dec. 21, 2017.)

By August 2012, a secret Defense Intelligence Agency report found that Salafists, the Muslim Brotherhood, and Al Qaeda were already “the major forces driving the insurgency” and that the U.S. and Gulf states backed them regardless. Speechwriter Ben Rhodes summed up the problem of “moderate” rebels who were indistinguishable from Al Qaeda in his White House memoir, “The World As It Is.” In that, he writes that “Al Nusra was probably the strongest fighting force within the opposition, and while there were extremist elements in the group, it was also clear that the more moderate opposition was fighting side by side with al Nusra.  I argued that labeling al Nusra as terrorists would alienate the same people we want to help while giving al Nusra less incentive to avoid extremist affiliations.”

The problem was how to separate the “good” Al Qaeda fighters from the “bad.”  Rhodes later complained when Russian President Vladimir Putin said that he and his fellow Obama officials were “trying to climb a spruce tree naked without scratching our ass.”  This was “smug,” Rhodes says.  But Putin was merely using a colorful expression to say that the policy made no sense; which it didn’t.

The cost, half a dozen years after the Clinton email, is staggering.  As many as 560,000 people have died, half the population has been displaced, while the World Bank has estimated total war damage at $226 billion, roughly six years’ income for every Syrian man, woman, and child. A cockeyed memo thus unleashed a real-life catastrophe that refuses to go away.  It’s a nightmare from which President Donald Trump is struggling to escape in his confused and deluded way and that the Deep State – everyone from arch-neocon John Bolton to “liberal” Nancy Pelosi– is determined to renew.

Daniel Lazare is the author of “The Frozen Republic: How the Constitution Is Paralyzing Democracy” (Harcourt Brace, 1996) and other books about American politics.  He has written for a wide variety of publications from The Nation to Le Monde Diplomatique and blogs about the Constitution and related matters at Daniellazare.com.

Doc Vega commented on Doc Vega's blog post For Those Who Fight Evil
"Ha ha Good One cheeki! "
8 hours ago

cheeki kea commented on Doc Vega's blog post For Those Who Fight Evil
"Brains of sheep moving to slow. Lower IQ begins to show, mass immigration diluting the nation, of…"
14 hours ago