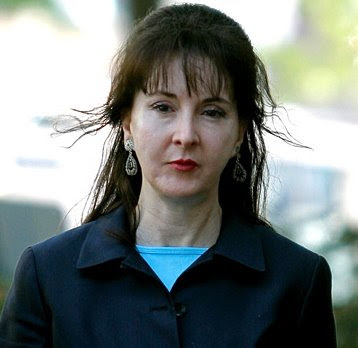 The Tarpon Springs, Florida police and the corporate media have immediately declared the death of Deborah Jeane Palfrey (aka- "the DC Madam") a suicide-- even before the police were willing to confirm the body was hers! They claim there is a suicide note but won't disclose the contents. You'll recall she was convicted of running a prostitution service catering to members of the Inside the Beltway elite. Her client list yielded up a number of Bush Regime bigwigs and the hapless wingnut from Louisiana, David Diapers Vitter, who has a long history of chasing prostitutes in his own state and elsewhere. Of course, it is likely that whomever else was on that client list-- the undisclosed politicians, for example-- would have quite the motive for murder.

One of the escort service employees was former University of Maryland, Baltimore County, professor Brandy Britton, who was arrested on prostitution charges in 2006. She committed suicide in January before she was scheduled to go to trial.

Last year, Palfrey said she, too, was humiliated by her prostitution charges, but said: "I guess I'm made of something that Brandy Britton wasn't made of."

One of the key motives behind the DC Madam's murder may have been the information her call girls picked up from Washington's top brass concerning foreknowledge and government complicity in the 9/11 attacks.

Madsen also connected another suspicious death - that of former CIA agent Roland Carnaby who was gunned down by Houston police last week - to another individual who was involved in both the 9/11 cover-up and the D.C. Madam scandal, disgraced lobbyist Jack Abramoff.

Noting that Palfrey and her defense team had tried to invoke the Classified Information Procedures Act in the U.S. District Court in Washington, which is only used when classified information or the names of people who are intelligence officers needs to be discussed, Madsen said Palfrey, "Had information which could have a bearing on the 9/11 attacks that some of her employees may have picked up information beforehand that would have been very useful to the 9/11 investigation."

Madsen added that most of Palfrey's call girls had been active around the area of McLean Virginia, which is where the CIA and other intelligence agencies are based and where Dick Cheney lived at the time.

Palfrey had told him that her escort service was in fact being used as an intelligence operation to gather intelligence on individuals who used the service, particularly those connected to the military.

Madsen, who spoke personally to Palfrey on numerous occasions, recalls one conversation at dinner about a month a go with Palfrey and her asset forfeiture lawyer where Palfrey told him, 'I have information that would have been of great interest to the 9/11 Commission - there's information that they have (her call girls) that would have been very important for the 9/11 Commission to know having to do with intelligence they picked up about 9/11 before it happened'.

The former NSA official noted that some of Palfrey's call girls were being chauffeured by Sherlington Limousines to poker parties attended by former CIA director and co-chair of the Joint 9/11 Intelligence Inquiry Porter Goss. One of the reasons cited for Goss' abrupt resignation in May 2006 was his alleged involvement in a prostitution scandal where lobbyists were holding parties for GOP lawmakers that featured hookers and gambling at the Watergate Hotel in D.C.
On the morning of 9/11, Goss was having breakfast with the head of Pakistan’s Inter Services Intelligence (ISI) General Mahmoud Ahmad, the man who ordered a wire transfer of $100,000 to alleged lead hijacker Mohammed Atta.

In addition, Madsen pointed out that Jack Abramoff, who was also connected to the DC Madam scandal, allowed at least two of the 9/11 hijackers to use one of his casino boats in the days before 9/11, and this is what Palfrey was probably referring to when she spoke about her call girls picking up information about 9/11 before it happened.

"There's the link, when you've got Abramoff and you had two of those hijackers on his casino boat a few days before 9/11 - I just wonder if that's what Jeane was talking about," said Madsen, "Because now I'm looking at this crazy incident in Houston with Roland Carnaby, a retired CIA guy who was still contracted to the CIA, being gunned down in broad daylight by the Houston police department - now I've been told by Agency sources in Houston that one of the people he was looking at was Abramhoff and the casino boats - so here you've got two people in the same week, looks like they were both assassinated in broad daylight," he concluded. Many readers will recall that Newsweek reported that military brass in Washington received a warning the night before the 9/11 attacks which led to a September 11 flight being cancelled. "NEWSWEEK has learned that while U.S. intelligence received no specific warning, the state of alert had been high during the past two weeks, and a particularly urgent warning may have been received the night before the attacks, causing some top Pentagon brass to cancel a trip. Why that same information was not available to the 266 people who died aboard the four hijacked commercial aircraft may become a hot topic on the Hill," according to the September 13 2001 issue.

The connection to 9/11 is tantalizing and provides a key motive for why numerous power brokers would have wanted Palfrey to be shut up for good before she had the opportunity to release information in court that her call girls picked up about 9/11 pointing to foreknowledge and government complicity in the attacks.

Deborah Palfrey, the so-called D.C. Madam,who tells Alex Jones she ...to listen to the entirety of the last interview with Palfrey.

UPDATE: In an almost uncanny development, as soon as this article started to go viral on the Internet, Time Magazine released a storyclaiming that Palfrey told author Dan Moldea that she would rather commit suicide than go to jail. What a funny coincidence!

FLASHBACK: D.C. Madame: "Big Names" May Be On Client List

FLASHBACK: Cheney "X'd" off the DC Madam's list by ABC/Disney

Quoth Palfrey in August 1991: "If taken into custody, my physical safety and most probably my very life would be jeopardized," she wrote. "Rape, beating, maiming, disfigurement and more than likely murder disguised in the form of just another jailhouse accident or suicide would await me."

oh hell ya she was taken out, she had the dirt on a lot of people, and 9/11 info