Robert Wenzel over at the Target Liberty blog reports that Reddit has decided to “quarantine” the 9/11 Truth board. He posted this tweet:
View image on Twitter 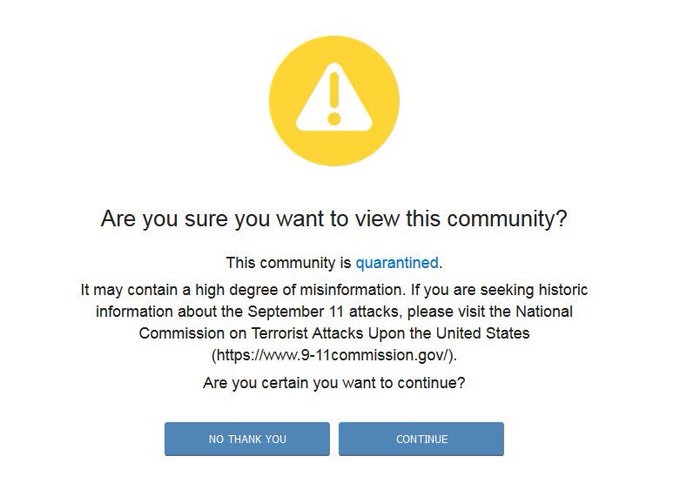 Wow. Reddit just “quarantined” the #911Truth board. Because its so unsafe for us to be discussing a mountian of credible evidence? And they recommend the 9/11 Commisson- members of which dropped out in protest? This is some Orwellian bullshit and i am dissapoint

Reddit tells us if want the truth about the event, we should surf over to the government to the National Commission on Terrorist Attacks Upon the United States website.

It is a sincerely astounding document that puts forth all kinds of conspiracy theories—for instance, how Arabs supposedly violated the laws of physics—and these assorted fairy tales and scary bedtime stories are expected to be accepted without question, lest one become a “truther” and face the scorn of the state and now social media.

The near perfect “pancake” or “gravitational” collapse of the WTC is impossible, to say nothing about the absurd theory jet fuel melted steel girders.

And yet, thanks to the government and its tethered media, if you question the science of the collapse you’re deluded a “tinfoil hatter,” maybe dangerous, an extremist.

It’s interesting Reddit decided to call this a quarantine. It has locked down the board in the hope the contagion of questions will not spread. It is like sending lepers to a remote island in the South Pacific.

Not that it matters. For most of the American people, 9/11 is a distant memory. Its horrific legacy—a surveillance and police state, the permanence of war and war crimes—has faded into the white noise of social media.

The occasional reappearance of the truther virus must not be allowed, not by Reddit or the government, for as Robert Gates, the former CIA boss and “defense” secretary under Bush and Obama said: “The American people know what they saw with their own eyes on September 11, 2001. To suggest any kind of government conspiracy in the events of that day goes beyond the pale.”

Doc Vega commented on Doc Vega's blog post For Those Who Fight Evil
"Ha ha Good One cheeki! "
1 hour ago

Less Prone commented on cheeki kea's blog post "I Am Taking This Very Seriously": BlackRock's Larry Fink Struggles With Demonized ESG narrative.
"Where did they get the name Blackrock for this company and how does it relate to their values? The…"
3 hours ago

"Yes Cheeky, Finland is one of the most obedient suckers of the flock led by Schwab Jugend who…"
5 hours ago

Gail Jones is now a member of 12160 Social Network
5 hours ago
Welcome Them!

cheeki kea commented on Doc Vega's blog post For Those Who Fight Evil
"Brains of sheep moving to slow. Lower IQ begins to show, mass immigration diluting the nation, of…"
7 hours ago

"First you see the Nordic ladies in their beautiful costumes and then you see IT. Looks like Finland…"
8 hours ago

cheeki kea commented on tjdavis's blog post Canadian Government Asissting Suicide
" Oh wow That was really said. " Trained to Eliminate those that are suicidal" Not a…"
10 hours ago