Scientists are alarmed by the discovery of unusual numbers of fish in the Gulf of Mexico and inland waterways with skin lesions, fin rot, spots, liver blood clots and other health problems. 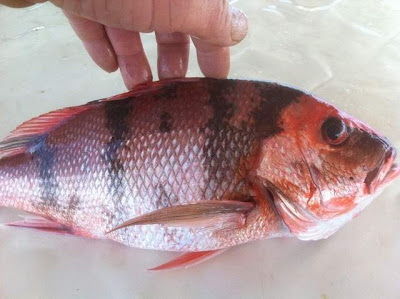 Red snapper with abnormal stripes caught by a local commercial fisherman. Scientists are seeing a growing number of Gulf fish with lesions and other health problems and are conducting tests to determine whether they are related to the BP oil spill. / Special to the News Journal Scientists are alarmed by the discovery of unusual numbers of fish in the Gulf of Mexico and inland waterways with skin lesions, fin rot, spots, liver blood clots and other health problems.

"It's a huge red flag," said Richard Snyder, director of the University of West Florida Center for Environmental Diagnostics and Bioremediation. "It seems abnormal, and anything we see out of the ordinary we'll try to investigate."

Are the illnesses related to the BP oil spill, the cold winter or something else?
If the illnesses are related to the oil spill, it could be a warning sign of worse things to come.
In the years following the 1989 Exxon Valdez oil spill in Alaska's Prince William Sound, the herring fishery collapsed and has not recovered, according to an Exxon Valdez Oil Spill Trustee report. The herring showed similar signs of illness — including skin lesions — that are showing up in Gulf fish.

Worried that same scenario could play out along the Gulf Coast, Patterson is conducting research on the chronic effects of the BP oil spill on Gulf fish. And he sees troubling signs consistent with oil exposure: fish with lesions, external parasites, odd pigmentation patterns, and diseased livers and ovaries. These may be signs of compromised immune systems in fish that are expending their energy dealing with toxins, Patterson said.
"I've had tens of thousands of fish in my hands and not seen these symptoms in so many fish before," said Patterson, who has been studying fish, including red snapper, for 15 years. "All those symptoms have been seen naturally before, but it's a matter of them all coming at once that we're concerned about."

That was the plan....KILL the gulf of Mexico.

Dump millions of gallons of corexit into the water and tell the sheeple / chattle that everything is fine...

Now that the oil industry has killed the gulf, as most folks leave this toxic wasteland - I suspect the petro industry will pick-up land for pennies on the dollar and build huge refineries throughout the whole region. It just makes sense considering the short distance off-shore crude would have to be transported. Generations of family livelihoods wiped-out to usher in the dawn of Gulf Oil Corporatism.

Their new motto should be: "We Pollute, Now Pack Your Bags And Don't Dispute."

"she looks better than your ol ugly ass I bet ;)"
44 minutes ago

The Gas Shortage Is Just The Beginning...In this video, we break down who is really responsible for the Colonial Pipeline cyber attack and why more of these ...
46 minutes ago
0 Comments 0 Favorites

rlionhearted_3 favorited Guardian of Scotland's discussion Why are magnets sticking to the injection sites of those that have taken the Covid 19 injections?
20 hours ago