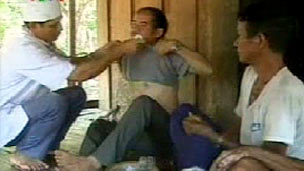 Vietnam says it will ask for international help to find out what is causing a skin infection that has already killed 19 people.

More than 170 people in the country's central province of Quang Ngai have reported symptoms.

The disease begins with a rash on the hands and feet: it can progress to liver problems and multiple organ failure.

Vietnamese health ministry tests have failed to pinpoint the cause.

The mystery illness was first reported between April and December 2011 and then subsided, but broke out again last month.

Health workers say it responds well to early intervention but is difficult to treat once established.

Frightened residents of Reu village in an impoverished, mountainous part of Quang Ngai, have laid branches across the path to the houses of infected people to try to isolate the outbreak.

"We have to block the entrances here to stop patients from getting out and spreading the disease," one resident, Pham Van Tray, told Vietnamese TV.

steve replied to Less Prone's discussion MRI scans reveal impact of racism and poverty on Black children’s brains
"How long will we allow this insane catering to these fkn primitive negroes. They are without a…"
28 minutes ago

NATO and Western countries do not want peace in Ukraine. In fact they are actively and openly talking about soldiers and boots on the ground. Putin just issu...
52 minutes ago
0 Comments 0 Favorites