The U.S. could avoid a lot of its problems with a return to the gold standard, Rep. Ron Paul told CNBC’s “Closing Bell” on Friday.

“We could avoid some of the horrendous swings in the marketplace with bubbles building and bursting and transfer of wealth from the middle class to the wealth,” Paul said.

(Read More: Why Return to Gold Standard Is Seen By Some as 'Ludicrous'.)

The Texas Republican has long pushed for a return to gold as the basis of money, and now for the first time in 30 years, the Republican platform will call for a gold commission to look into a return to the gold standard. 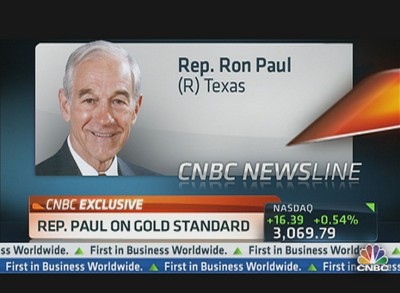 While Paul told CNBC that the decision to include a gold commission — as well as an audit of the Federal Reserve (learn more) — as a plank of the Republican platform was partly an effort to appease him ahead of the convention, he also said, “It’s a reflection of the effort we’ve had educating people about the return to gold.”

Paul also said that the conditions are much worse today than they were when the last gold commission was formed in the early 1980s.

“We’re deeply in debt and all that is being offered out of Washington is spend more money, borrow more money and print more money,” Paul said.

“You can’t get out of a debt problem by creating more debt and printing more money,” Paul added.

You need to be a member of Gold & Silver/ Precious Metals to add comments!