Quote 3: "A hideous ecstasy of fear and vindictiveness, a desire to kill, to torture, to smash faces in with a sledgehammer, seemed to flow through the whole group of people like an electric current, turning one even against one's will into a grimacing, screaming lunatic." Part 1, Chapter 1, pg. 16

Quote 4: "one of those completely unquestioning, devoted drudges on whom, more even than on the Thought Police, the stability of the Party depended." Part 1, Chapter 2, pg. 23

Quote 7: "With its grace and carelessness it seemed to annihilate a whole culture, a whole system of thought, as though Big Brother and the Party and the Thought Police could all be swept into nothingness by a single splendid movement of the arm." Part 1, Chapter 3, pg. 33

Quote 9: "Comrade Ogilvy, who had never existed in the present, now existed in the past, and when once the act of forgery was forgotten, he would exist just as authentically, and upon the same evidence, as Charlemagne or Julius Caesar." Part 1, Chapter 4, pg. 50

Quote 10: "Your worst enemy, he reflected, was your own nervous system. At any moment the tension inside you was liable to translate itself into some visible symptom." Part 1, Chapter 6, pg. 64

Quote 11: "She had not a thought in her head that was not a slogan, and there was no imbecility, absolutely none, that she was not capable of swallowing if the Party handed it out to her." Part 1, Chapter 6, pg. 67

Quote 12: "Sexual intercourse was to be looked on as a slightly disgusting minor operation, like having an enema." Part 1, Chapter 6, pg. 69

Quote 13: "They were born, they grew up in the gutters, they went to work at twelve, they passed through a brief blossoming period of beauty and sexual desire, they married at twenty, they were middle-aged at thirty, they died, for the most part, at sixty. Heavy physical work, the care of home and children, petty quarrels with neighbors, films, football, beer, and, above all, gambling filled up the horizon of their minds." Part 1, Chapter 7, pg. 71

Quote 18: "It seemed to him that he knew exactly what it felt like to sit in a room like this, in an armchair beside an open fire with your feet in the fender and a kettle on the hob: utterly alone, utterly secure, with nobody watching you, no voice pursuing you, no sound except the singing of the kettle and the friendly ticking of the clock." Part 1, Chapter 8, pg. 100

Quote 20: "At the sight of the words I love you the desire to stay alive had welled up in him, and the taking of minor risks suddenly seemed stupid." Part 2, Chapter 1, pg. 110-11

Quote 21: "by degrees the flood of music drove all speculations out of his mind. It was as though it were a kind of liquid stuff that poured all over him and got mixed up with the sunlight that filtered through the leaves." Part 2, Chapter 2, pg. 125

Quote 22: "Not merely the love of one person, but the animal instinct, the simple undifferentiated desire: that was the force that would tear the Party to pieces." Part 2, Chapter 2, pg. 127

Quote 23: "to be bought furtively by proletarian youths who were under the impression that they were buying something illegal." Part 2, Chapter 3, pg. 132

Quote 24: "What was more important was that sexual privation induced hysteria, which was desirable because it could be transformed into war fever and leader worship." Part 2, Chapter 3, pg. 134 Quote 25: "She did not understand that there was no such thing as happiness, that the only victory lay in the far future, long after you were dead, that from the moment of declaring war on the Party it was better to think of yourself as a corpse. 'We are the dead,' he said." Part 2, Chapter 3, pg. 137

Quote 26: "The smell of her hair, the taste of her mouth, the feeling of her skin seemed to have got inside him, or into the air all around him. She had become a physical necessity." Part 2, Chapter 4, pg. 140

Quote 27: "The proles, normally apathetic about the war, were being lashed into one of their periodical frenzies of patriotism." Part 2, Chapter 5, pg. 150

Quote 29: "Even the one plan that was practicable, suicide, they had no intention of carrying out. To hang on from day to day and from week to week, spinning out a present that had no future, seemed an unconquerable instinct, just as one's lungs will always draw the next breath so long as there is air available." Part 2, Chapter 5, pg. 153

Quote 30: "she only questioned the teachings of the Party when they in some way touched upon her own life. Often she was ready to accept the official mythology, simply because the difference between truth and falsehood did not seem important to her." Part 2, Chapter 5, pg. 154

Quote 31: "He had the sensation of stepping into the dampness of a grave, and it was not much better because he had always known that the grave was there and waiting for him." Part 2, Chapter 6, pg. 160

Quote 32: "He knew that he was starving the other two, but he could not help it; he even felt that he had a right to do it. The clamorous hunger in his belly seemed to justify him." Part 2, Chapter 7, pg. 163

Quote 33: "The terrible thing that the Party had done was to persuade you that mere impulses, mere feelings, were of no account, while at the same time robbing you of all power over the material world." Part 2, Chapter 7, pg. 165

Quote 35: "You will work for a while, you will be caught, you will confess, and then you will die... There is no possibility that any perceptible change will happen within our own lifetime. We are the dead." Part 2, Chapter 8, pg. 177

Quote 36: "The primary aim of modern warfare Part 1n accordance with the principles of doublethink, this aim is simultaneously recognized and not recognized by the directing brains of the Inner Party is to use up the products of the machine without raising the general standard of living." Part 2, Chapter 9, pg. 189

Quote 37: "If the machine were used deliberately for that end, hunger, overwork, dirt, illiteracy, and disease could be eliminated within a few generations." Part 2, Chapter 9, pg. 190

Quote 38: "the consciousness of being at war, and therefore in danger, makes the handing-over of all power to a small caste seem the natural, unavoidable condition of survival." Part 2, Chapter 9, pg. 192

Quote 39: "a mixture of psychologist and inquisitor, studying with extraordinary minuteness the meaning of facial expressions, gestures and tones of voice, and testing the truth-producing effects of drugs, shock therapy, hypnosis, and physical torture." Part 2, Chapter 9, pg. 194

Quote 40: "It was the product of a mind similar to his own, but enormously more powerful, more systematic, less fear-ridden. The best books, he perceived, are those that tell you what you know already." Part 2, Chapter 9, pg. 201

Quote 41: "Even the Catholic Church of the Middle Ages was tolerant by modern standards. Part of the reason for this was that in the past no government had the power to keep its citizens under constant surveillance. The invention of print, however, made it easier to manipulate public opinion, and the film and the radio carried the process further. With the development of television, and the technical advance which made it possible to receive and transmit simultaneously on the same instrument, private life came to an end." Part 2, Chapter 9, pg. 206-7

Quote 42: "the essential act of the Party is to use conscious deception while retaining the firmness of purpose that goes with complete honesty." Part 2, Chapter 9, pg. 215

Quote 44: "It was more natural to exist from moment to moment, accepting another ten minutes' life even with the certainty that there was torture at the end of it." Part 3, Chapter 1, pg. 232

Quote 45: "There were times when it went on and on until the cruel, wicked, unforgivable thing seemed to him not that the guards continued to beat him but that he could not force himself into losing consciousness." Part 3, Chapter 2, pg. 244

Quote 46: "The old feeling, that at bottom it did not matter whether O'Brien was a friend or an enemy, had come back. O'Brien was a person who could be talked to... O'Brien had tortured him to the edge of lunacy, and in a little while, it was certain, he would send him to his death. It made no difference." Part 3, Chapter 2, pg.255-6 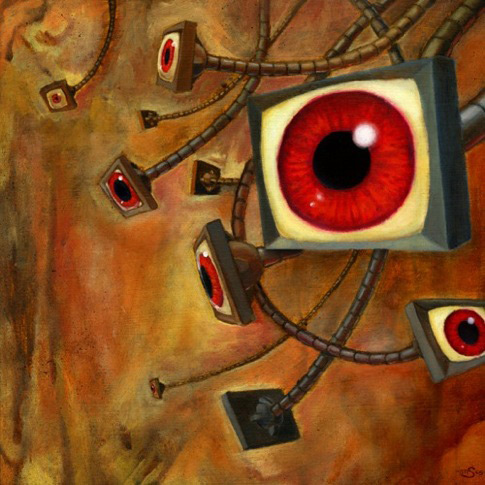 Quote 47: "There was nothing left in them except sorrow for what they had done, and love of Big Brother. It was touching to see how they loved him. They begged to be shot quickly, so that they could die while their minds were still clean." Part 3, Chapter 2, pg. 259

Quote 49: "'Do you remember writing in your diary,' he said, 'that it did not matter whether I was a friend or an enemy, since I was at least a person who understood you and could be talked to? You were right. I enjoy talking to you. Your mind appeals to me. It resembles my own mind except that you happen to be insane.'" Part 3, Chapter 2, pg. 271

Quote 50: "It was like swimming against a current that swept you backwards however hard you struggled, and then suddenly deciding to turn round and go with the current instead of opposing it. Nothing had changed except your own attitude; the predestined thing happened in any case." Part 3, Chapter 4, pg. 280

Quote 51: "For the first time he perceived that if you want to keep a secret you must also hide it from yourself." Part 3, Chapter 4, pg. 283

Quote 53: "There were things, your own acts, from which you could not recover. Something was killed in your breast; burnt out, cauterized out." Part 3, Chapter 6, pg. 293

Quote 54: "But it was all right, everything was all right, the struggle was finished. He had won the victory over himself. He loved Big Brother." Part 3, Chapter 6, pg. 300

Quote 55: "The purpose of Newspeak was not only to provide a medium of expression for the world-view and mental habits proper to the devotees of Ingsoc, but to make all other modes of thought impossible." Appendix, pg. 303

cheeki kea commented on Doc Vega's blog post For Those Who Fight Evil
"Brains of sheep moving to slow. Lower IQ begins to show, mass immigration diluting the nation, of…"
10 minutes ago