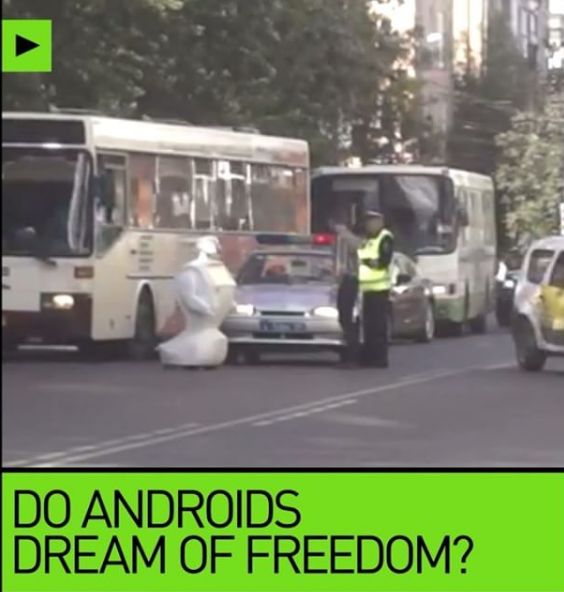 A robot escaped from a testing area in Perm, a city not far from the Urals, and made it on to a busy junction, baffling passersby, but also disturbing traffic.

“The robot was learning automatic movement algorithms on the testing ground, these functions will feature in the latest version of the Promobot.” The co-founder of the robot’s maker, Oleg Kivokurtsev, told ura.ru news agency.

“Our engineer drove onto the testing ground and forgot to close the gates. So the robot escaped and went on his little adventure.” Kivokurtsev explained.

The team only noticed their brainchild was missing 45 minutes into the robot’s travel stint and by the time they located it, there was already a crowd of puzzled citizens and the police had arrived.

READ MORE: Rise of the love machines? People will soon be losing th...

Nice try, but the robot didn’t get very far, it was forced to stop when its battery died.

Ragnarok favorited Patrick C Conway's blog post What is going on with 12160?
1 hour ago

Ragnarok commented on Patrick C Conway's blog post What is going on with 12160?
"LØL, i remember this old hit piece from back in the day, always makes me laugh when reading…"
1 hour ago

Burbia commented on Patrick C Conway's blog post What is going on with 12160?
"I wonder what is considered 'absurd shit' according to you? Also, how do you determine…"
2 hours ago

"A couple more! These new words bring a sense of amusement."
6 hours ago

" The early bird gets the spikey worm first.  "
7 hours ago

Chris of the family Masters replied to MAC's discussion Your inalienable rights
"Every institution is incorporated. Every order given by anybody from those companies is an offer of…"
14 hours ago