Next week thousands of America's hard working Truckers (http://ridefortheconstitution.org/) will converge on DC to express their anguish against the officials who are causing irreparable damage to the greatest nation on earth. On The Adam Thompson Show (http://www.blogtalkradio.com/adamthompsonshow), Adam interviewed Zeeda Andrews from Truckers Ride For The Constitution to discuss this protest how it could impact the US 100 x more than any government shutdown.

These people are striking to bring to attention to how awful things have gotten in America - how the sociopaths across all 3 branches and our representatives have pretty much disregarded the US Constitution.

These people see don't see any difference between obama or bush - they see them as different shades of the same big piece of shit.

These people are also done with democrats & republicans - they see them as equal partners in the destruction of America.

These people are your fellow citizens and they STAND WITH YOU.

These people also come in peace and while they disdain those who are harming you & harming our nation - they don't wish harm upon anyone.

Permalink Reply by Central Scrutinizer on October 8, 2013 at 9:37pm

Fweezella and I are discussing a weekend road trip, hell its 2 hours away

If I were that close - I'd be joining you!

Ronald Reagan said it best "Government IS THE PROBLEM"!

Whoa!!!!!  Oh God!!!!!  This is what I have been thinking about for the last decade!!!  The truckers have THE power in this country.  My God, I hope they keep it up, and CONTINUE.

The truckers can SHUT THIS COUNTRY DOWN PERIOD!!  I have long ago hoped [more like SUSPECTED] that truckers were not stereotypical, beer-drinking, MINDLESS flag-waving patriots.  They are TRUE patriots, especially if they keep this up!!.

Oh, God!  This could be the very best thing that has ever happened to the U.S., in regards to it's steady and rapid decline as a civilization, and that's no exaggeration.

I ain't the trucker type.  But, on a trip I made to Ohio back in June, it HIT ME!  They have THE power!  They could shut down the highways.  They can stop COMMERCE.  But I used to wonder where the leadership of truckers were, in terms of their consciousness.  It looks good!!

And now, we see that the gumint is going to shut down part a major highway, JUST to keep the truckers out.

If there are any truckers reading this note, I urge you to NOT STOP!!!  Strike for as long as you can hold out.  A week would do it.  A month would CLINCH it.

And now, if only the REST of the U.S. would wake up!!!  In France (and I don't know if this is still the case), when ever one sector of French society went on struck, such as garbage collectors, EVERY OTHER SECTOR WOULD JOIN THEM in support!!

See, if we had THAT kind of cooperative spirit in the U.S., the politicians would be AS THEY SHOULD BE: Our servants totally.  But, the politicians know that they can do anything they want, and we can't respond [We CAN, but they know that we won't].

They can't bring in scabs.  Because it TAKES TIME to train someone to truck; to be a trucker.  It would be a PROFOUND waste of money and energy for them to try to train scabs to take the truckers' jobs.  So, those truckers should stay out FOR A MONTH!!!

God, this is exciting!!

Drove for United Vanlines for 5 years :) 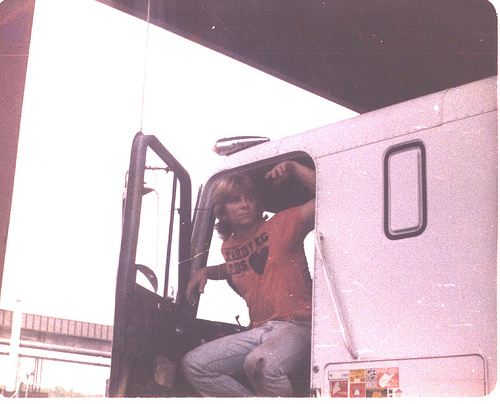