A video clip shot yesterday at Columbus Ohio Airport illustrates how the Transportation Security Administration has dreamed up a bizarre new way to waste time and taxpayer dollars – by testing drinks purchased by travelers for explosives inside the airport long after they have already passed security.

The footage shows TSA agents walking around a departure lounge asking to test passengers’ drinks for explosive residue with a swab they hold over the liquid.

“My wife and son came back from a coffee shop just around the corner, then we were approached. I asked them what they were doing. One of the TSA ladies said that they were checking for explosive chemicals (as we are drinking them). I said “really – inside the terminal? You have got to be kidding me.” I asked them if they wanted to swab us all. She responded with something like, ‘yes sometimes we need to do that’. I then asked if she wanted a urine sample…nonetheless, the TSA is way out of control,” he adds, joking that the TSA’s next move could be to visit people’s homes before they even leave for the airport (they’re already in the parking lot demanding to search people who a...)

As we have previously highlighted, the drinks policy was recently introduced with virtually no explanation from the TSA whatsoever. The much vaunted 2006 liquid bomb plot on which this nonsense is all based completely collapsed in court and was revealed to be farcical at best.

Experts have savaged rules relating to liquids being carried through security as pointless and unnecessary and yet they still remain in place six years later, with ludicrous cases routinely popping up of mothers having to drink their own breast milk or even pump it into empty bottles.

But this new rule applies to drinks purchased within the airport after travelers have already passed airport security, items that have presumably already had to pass some form of security check to be brought inside the airport in the first place.

The drinks testing farce has been accompanied by other harebrained TSA schemes which have virtually nothing to do with genuine security and everything to do with subjecting the public to intimidation and obedience training.

The federal agency recently brought in a similarly asinine new policy in which travelers are ordered to “freeze” on command by TSA screeners while passing through security – for no apparent reason other than to check they will obey orders without question.

Perhaps the TSA should concentrate on real security threats and cleaning up their behavior of their own criminally-prone employees instead of harassing travelers who have already been through the ordeal of a grope down or a radiation body scan.

Given the fact that TSA agents now festoon political events, highways and even prom nights, how long is it before we have blue-shirted goons in fast food restaurants checking whether or not our Diet Cokes are weapons of mass destruction?

Back to TSA Awareness Project - Stop Irradiating Our Bodies and Fon...

Send in the nice smiling women to break down the people a little bit more. I dont understand how people just willing submit to this kind of humiliation when going along with the rules. It appears the rules are subject to change at a moments notice in this game of "Everyones a suspect".

Permalink Reply by Lawrence Edward Calcutt on September 3, 2012 at 9:42pm

I think its time we started to fight back,,, with humor and pointed images that tell a story and a truth about the TSA and its antics. Try this one. and share it if you like.

Just put your cursor on the image and right click and than 'save as' on your PC or lappy were you can find it to share... 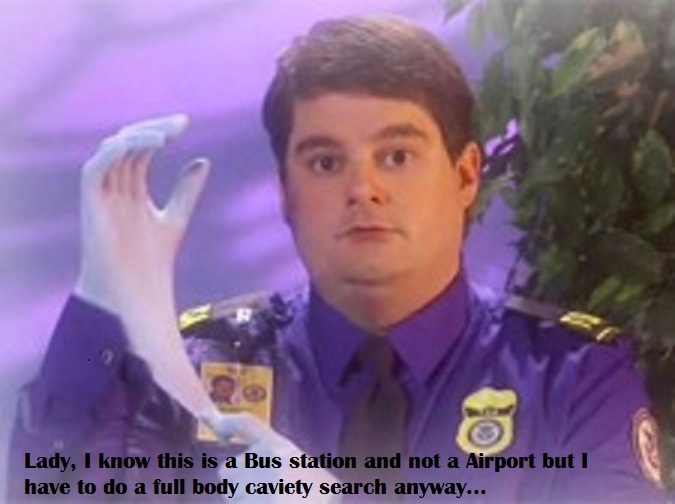 Its ok lady, he had a year at Med School before he was kicked out for... err, well 7 months we hear.

POST CARDS AVAILABE FOR 5 DOLLARS IN THE NEWS SHOP AT THIS BUS STATION ONLY.....

These people have gone totally INSANE ! Better not eat any beans the TSA will require a fart test to measure the amount of gas be ware

That might be polite as well...on a PLANE.  Jeezus, I can already feel the wafts of warm, fecal humidity moving over my face in a jammed packed plane.  Yeah, you're making the TSA sound better and better....

I lost a gallon of Belize rum, that I bought in the airport in Belize, when I made a transfer in Houston to Austin.  Hadn't left the security area, just transferring planes.  Take my Liberty, Take my Freedom...but my RUM!!  I was like "but, but..but..." reaching my arms out toward MY rum, as the jack ass pulled 4 bottles out of my carry on...he was SMILING.  Gggrrrrrr...that was some good shit too...

These same TSA still refuse to arrest the domestic perpetrators of the attacks on 9-11-2001, HAARP, Wall Street looting, the intentional oil well blow out, etc. . At least the sons of bitches aren't yet showing up for work in X-rated bondage gear to yank the silver out of our teeth.

To add to the suspicion, why aren't they testing the booze at the bar?

LOL! PH, in my younger days I would have stripped naked right there before I would submit to their exray just to prove a point!

Insanity. The last time I flew they made me pour one out that I had just bought a few feet away.  I will never fly again.  You are right, Pit Bull, everyone is suspect.

Less Prone commented on cheeki kea's blog post "I Am Taking This Very Seriously": BlackRock's Larry Fink Struggles With Demonized ESG narrative.
"Where did they get the name Blackrock for this company and how does it relate to their values? The…"
14 hours ago

Gail Jones is now a member of 12160 Social Network
16 hours ago
Welcome Them!