The elder Boston marathon Tamerlan Tsarnaev has been buried in a secret midnight service at an undisclosed location after a mystery benefactor came forward - ending weeks of controversy.

According to federal officials the body was taken from the Graham Putnam & Mahoney Funeral Parlor and entombed under cover of darkness outside of the city of Worcester, Massachusetts, where his remains have laid since last Friday.

The burial location was approved by Ruslan Tsarni, the terror suspects outspoken uncle, who has been attempting to find a cemetery that would accept his nephew for burial.

’As a result of our public appeal for help a courageous and compassionate individual came forward to provide the assistance needed to properly bury the deceased,’ said Worcester police in a statement this morning.

’His body is no longer in the city of Worcester and is now entombed.’

The body was finally buried one day after Worcester Police Chief Gary Gemme pleaded for help in burying Tsarnaev - who was killed in a firefight with police on April 19th in Watertown, just outside of Boston.

’There is a need to do the right thing,’ said Gemme said. ’We are not barbarians. We bury the dead.’

The statement did not say where his body now rests.

Peter Stefan, the director of the funeral home had previously expressed his strong desire to find a proper burial site for Tsarnaev despite protests outside the funeral home and the refusal of Cambridge to take his body for burial. 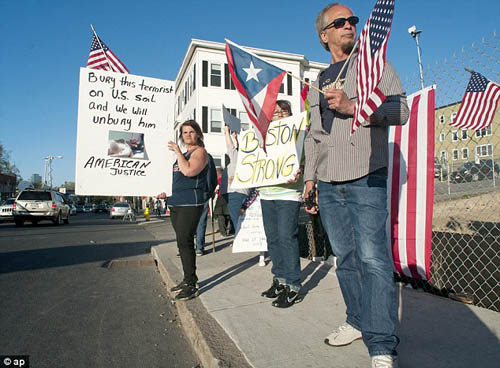 (From left), Lisa Taurasi, Lucy Rodriguez and Luis Barbosa, all of Worcester, Mass., hold protest signs as they stand across the street from Graham Putnam & Mahoney Funeral Parlors in Worcester, Mass. on Sunday evening 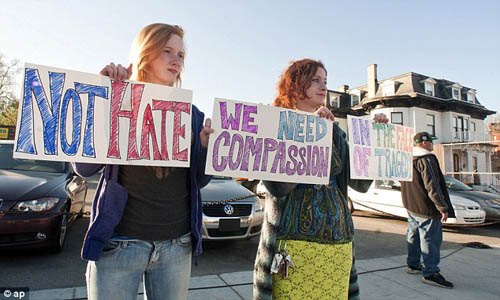 Fiona Gilley, (left), and her sister Nairi Melkonian, both of Worcester, hold signs urging compassion while they stand on the other side of the street from protestors in Worcester

Sgt. Kerry Hazelhurst with the Worcester police force said the body was no longer in Worcester and is now entombed. She did not disclose where the body was taken.

Tsarnaev’s body had been at the Graham Putnam & Mahoney Funeral Parlors for a week.

Read the full article at: dailymail.co.uk

There are but a few measures as to a country and societies righteous and moral standards, and they are how we treat our disabled, our elderly and our dead. This drama has exposed the various parties involved to be devoid of compassion, displaying zero tolerance and fair play and demonising a person who now dead, cannot defend himself against accusations and personal attacks on his character and actions. Poor form all round with the burial issue and highlighting a total lack of morals on behalf of the authorities involved, down to individual levels.

"Stupidity, like time or numbers, is one of nature's limitless resources."
15 hours ago