Court tells Ohio State patrolman Jared Haslar that good manners and cheerfulness is not probable cause for a search.

Ohio Court: Polite Drivers Are Not Suspicious
Ohio Court of Appeals throws out conviction of a man who was searched during a traffic stop because he was too polite. 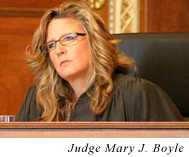 The second highest in Ohio decided on Wednesday that police have no business searching a motorist during a routine traffic stop for being too polite. The Court of Appeals suppressed the evidence that allowed police to seize a .40 caliber Sig Sauer and a small bag of marijuana from Joshua A. Fontaine at 2:27 am on December 12, 2012.

On that day, Ohio State Highway patrolman Jared Haslar was running a speed trap on Pearl Road in Strongsville, where the speed limit is 35 MPH. Patrolman Haslar claims his radar gun clocked Fontaine at 45 MPH, so he pulled him over. In the course of the stop, Fontaine cheerfully handed over his license, proof of insurance, and registration. This caused the officer to suspect criminal activity.

"While speaking to Mr. Fontaine I felt that his body language and his behavior was a little bit unusual," Patrolman Haslar testified. "He was extremely -- like almost overly polite, and he was breathing heavily at times while I was talking to him."

Old Denmark replied to Twilight Zone's discussion EAT CELEBRITY MEAT
"Just ordered the 4-in-1 sausage, chose the doc Phil, Ellen, Oprah and Tom Cruise one just to be…"
9 hours ago