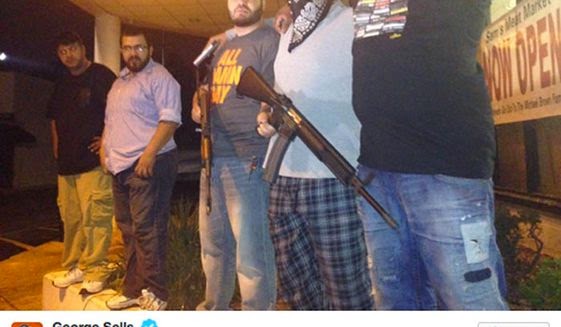 Police presence in question during overnight looting in Ferguson

St. Louis County Police say they were told to stand down by the Missouri State Highway Patrol #Ferguson

KTVI) – FOX 2 reporter George Sells interviews store owners that brought their own weapons to guard their store from looters.  They talked to police who the owners say were in the parking lot at Dominos and would not help.  The owners are not sure that they’re going to stay in business.

They have showed up with weapons to protect their property.

Store owners from Sam’s Meat Market in Ferguson, Missouri started using their own weapons to guard their merchandise from looters since the killing of 18-year-old Michael Brown by a police officer.

Reporters from a local Fox affiliate questioned armed convenience store owners who walked in on two looters early Saturday morning. They claim they contacted police to ask for protection from the looters, but were given the run-around. '

#Ferguson store owners rely on their guns to fend off second looting:

tjdavis commented on Doc Vega's blog post Texas Under Democrat Attack
"They have already destroyed Texas..  The fond memory disappeared with the kelp in Barton…"
27 minutes ago

With so much news of losses and gains Across the Ukraine - Russia Warzone, it is necessary to look at the real situation at an individual level. Avdiivka is...
3 hours ago
0 Comments 0 Favorites

tjdavis favorited cheeki kea's blog post Declassified CIA paper says we can sync our brainwaves to the electromagnetic frequency that surrounds the earth.
12 hours ago

Parrhesia favorited cheeki kea's blog post Declassified CIA paper says we can sync our brainwaves to the electromagnetic frequency that surrounds the earth.
16 hours ago

Declassified CIA paper says we can sync our brainwaves to the electromagnetic frequency that surrounds the earth.

"wow the invisible Sentimental vibrational energy apparatus of Knowledge has been launched. - And it…"
yesterday