CLEVELAND — A northeast Ohio well used to dispose of wastewater from oil and gas drilling almost certainly caused a series of 11 minor quakes in the Youngstown area since last spring, a seismologist investigating the quakes said Monday.

Research is continuing on the now-shuttered injection well at Youngstown and seismic activity, but it might take a year for the wastewater-related rumblings in the earth to dissipate, said John Armbruster of Columbia University’s Lamont-Doherty Earth Observatory in Palisades, N.Y.

Spencer Platt/Getty Images
A fracking opponent attends a public hearing on proposed fracking regulations in upstate New York on November 30, 2011 in New York City. New York chose to ban fracking; Ohio has begun to after recent earthquakes.
Kai Ryssdal: The strange sounds the good residents of Youngstown, Ohio, heard Christmas Eve turned out not to have been Santa on the roof. They were earthquakes. Same thing happened New Year's Eve as well -- in places close to a controversial type of natural gas drilling that's come to be known as fracking.

Earthquakes are yet another hazard associated with fracking that's led to yet louder calls for bans, which the state of Ohio partially did today. As part of his duties at the Sustainability Desk, Marketplace's Scott Tong has been out and about at some fracking wells. He's got our report.
marketplace.org audio 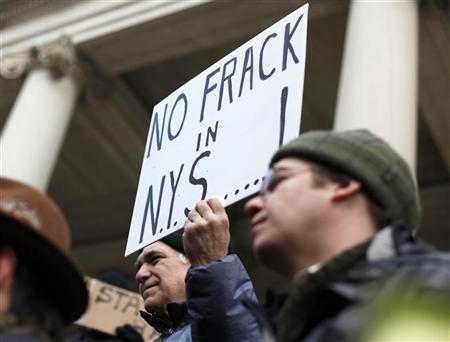 A 4.0 New Year's Eve quake in Ohio prompted officials to shut down five wells used to dispose of fluid used in the hydraulic fracturing process. That comes less than a year after Arkansas declared a moratorium due to a surge in earthquakes as companies developed the Fayetteville Shale reserve.
more @ reuters


WASHINGTON--A series of small earthquakes has prompted Ohio to suspend operations at a well used to dispose of waste water from “fracking,” a controversial technology to extract oil and gas from shale, officials said Tuesday.
The suspension came amid suspicions, which have not been confirmed, that the disposal of waste water by reinjecting it into the ground may have triggered the seismic activity.
The latest and strongest earthquake, which measured 4.0, occurred on New Year's Eve near the well operated by D&L Energy in Youngstown, in a region of northeastern Ohio that has seen a boom in fracking activity from a major shale formation known as the Utica Shale.

The state had quietly shut down operations at the Youngstown injection well after a 2.7 magnitude quake on Dec. 24, but then extended the moratorium to a 5-mile (8-kilometer) radius around the well after the larger quake Dec. 31, industry officials said.

On Tuesday, state officials confirmed the suspension but would not comment further, apparently reflecting concerns about its impact on a nascent industry that many have been banking on as a source of jobs and investments in a lo

Melissa Block interviews John Armbruster, a seismologist with Lamont-Doherty Earth Observatory, part of Columbia University, about why he believes the waste from fracking in Ohio has led to the earthquakes there. He says the injection of waste water from the fracking process created pressure on nearby faults, and he expects the quakes to continue — even after the process is stopped
npr.org audio

Ohio lawmakers have put a temporary ban on fracking after experts say it is certain that recent fracking in the Buckeye State caused an outbreak of earthquakes.

According to some seismologists, hydraulic fracturing, or fracking, is to blame for a string of tremors in Ohio, including a 4.0-magnitude quake on New Year’s Eve. It has long been suggested that fracking, which involves deep-earth drilling to extract gas for natural resource reserves, has been culpable for quakes. In the fracking process, wastewater collected during the deep drilling is injected back into the Earth for disposal. Thought to be safe by some, other experts insist that the brine water could find its way into subterranean faults and force parts of the planet to separate. The Youngstown, OH area has seen 11 small quakes since last spring, and now a moratorium has been instated in the area to keep future fracking from occurring while seismologists reinvestigate the quakes.

Even with a stay in place, however, experts say the quakes won’t be stopping anytime soon.

"The earthquakes will trickle on as a kind of a cascading process once you've caused them to occur," John Armbruster of Columbia University's Lamont-Doherty Earth Observatory tells the Associated Press. "This one year of pumping is a pulse that has been pushed into the ground, and it's going to be spreading out for at least a year."

Ray Beiersdorfer, a geology professor at Youngstown State University, adds to the Business Journal, “I wouldn't be surprised if it continued for a year or so." MORE http://rt.com/usa/news/fracking-ohio-quake-earth-165/

"Lucky I kept my old ones then. They could become valuable in the future. I may even seek out a few…"
2 minutes ago