Roni Alsheich condemned for comments, which come against backdrop of complaints by Ethiopian Jews over how their community is policed 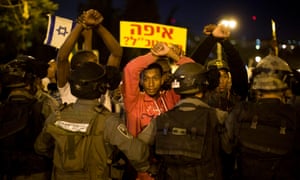 
Israel’s most senior police officer has provoked outrage by suggesting it is “natural” for officers to suspect Israelis of Ethiopian origin – as well as Arabs – of being more involved in crime than other Jews.

Roni Alsheich, Israel’s police commissioner, made the comments in response to a question at a conference of the Israeli bar association, suggesting more widely that research worldwide showed that “young people and immigrants” were disproportionately involved in crime.

His remarks come against a growing background of complaints by Ethiopian Jews over policing of their community – including accusations of crude profiling – which has led to recent street protests.

Asked about allegations of Israeli police violence against Ethiopians, Alsheich said: “In all criminological studies around the world it is proven that immigrants are more involved in crime than others, and this should not surprise us.

“In addition, all studies prove that young people are more involved in crime.

Central Scrutinizer left a comment for jittery
"Glad ya made it here Jittery, enjoy the ride!!!"
10 minutes ago

jittery is now a member of 12160 Social Network
26 minutes ago
Welcome Them!