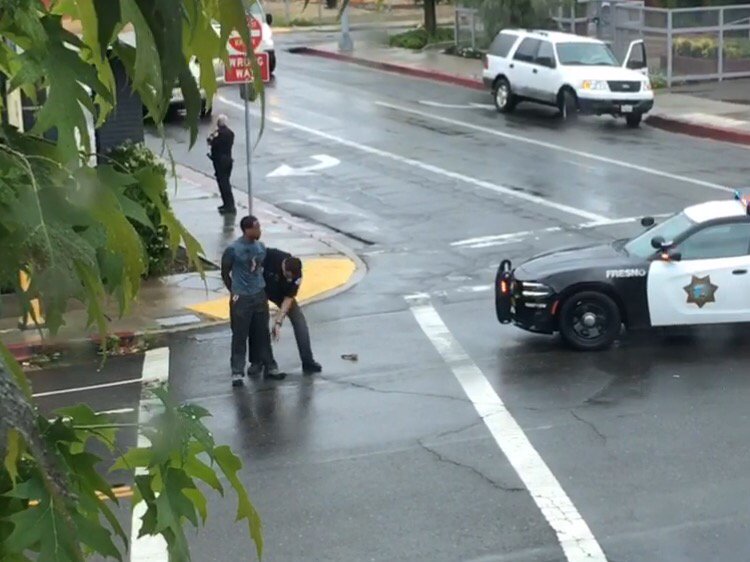 The suspect was identified as Kori Ali Muhammad, a 39-year-old man who was wanted in connection with the shooting death of a security guard outside a motel Thursday, said Police Chief Jerry Dyer. The FBI has been notified of the shooting deaths.

“This was a random act of violence,” Dyer said.

Within a minute, Dyer said, 16 shots were fired.

Moments later, a PG&E pickup truck driver arrived at police headquarters to report his passenger had been shot by a gunman who approached them.

Dyer said Muhammad had expressed hatred toward white people and the government. The chief said he shouted “Allahu Akbar” before turning himself into police.

Dyer said he wasn’t clear if it was terror-related.

PG&E said it was still trying gather information on what happened in Fresno.

“Our thoughts are with all involved in the incident that occurred in Fresno today,” PG&E said. “Public and employee safety is always our top priority.”

"Mr. Lindell is a strong supporter of President Trump. He supported the President during the Covid…"
13 minutes ago

Daily Con replied to Daily Con's discussion Mexican president López Obrador: 'Pandemic lockdowns are the tactic of dictators. Democratic leaders, fundamentally, must guarantee liberty'
"The Mexican President is the only Western leader to actually speak out against the lockdown…"
14 minutes ago

‘"The fundamental thing is to guarantee liberty,' says Mexican president when asked why he almost…See More
15 minutes ago
1 Comment 0 Favorites

I know there are many folks who have followed Q Anon and may take exception to this article. To…See More
18 minutes ago
0 Comments 1 Favorite

Less Prone commented on Chris of the family Masters's status
"Chris, Here is a ticked I made to Ning. I hope it will be solved…"
2 hours ago

"The double standards are blatant. These dimwits are treated like heroes as the acts of violence…"
2 hours ago

"More Double Standards: Antifa-BLM Organizer Who Stormed US Capitol Is Released from Jail Without…"
4 hours ago