Rand Paul warns of 'assassination' peril after Kavanaugh confirmation: 'I really worry someone is going to be killed' 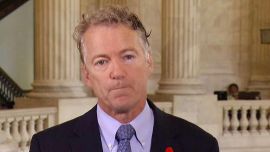 "I fear that there's going to be an assassination," Paul told a Kentucky radio show. "I really worry that somebody is going to be killed, and that those who are ratcheting up the conversation ... they have to realize they bear some responsibility if this elevates to violence."

Paul's wife, Kelley, revealed in a Breitbart News interview on Friday that she sleeps with a "loaded gun by my bed," has updated her home's security system and has "deadbolts all around my house." Kelley also wrote an op-ed published by CNN in which she called on Sen. Cory Booker, D-N.J., to tone down his rhetoric; in June, Booker called on his supporters to  “get up in the face of congresspeople.”

The Kentucky senator reiterated his wife's criticism on Tuesday. "When people like Cory Booker say get up in their face ... What he doesn't realize is that for every 1,000 persons who want to get up in your face, one of them is going to be unstable enough to commit violence," Paul said.

"I fear that there's going to be an assassination."

Last week, Paul was chased and verbally harassed by anti-Kavanaugh activists at Washington's Reagan National Airport. And last fall, Paul was attacked and beaten in his yard in Kentucky by his neighbor -- an episode that a Kentucky Democrat joked about earlier this year.