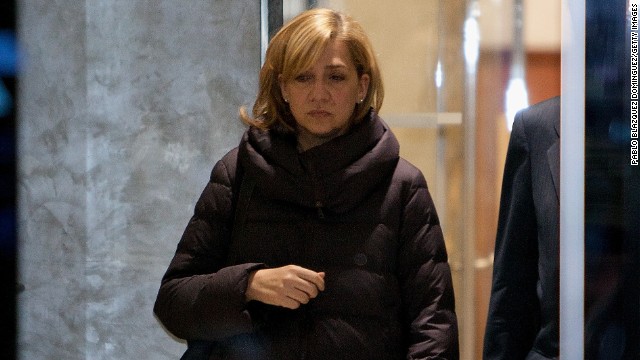 Princess Cristina of Spain after visiting King Juan Carlos I of Spain at La Milagrosa Hospital on March 4, 2013 in Madrid, Spain.

MADRID — A Spanish court Wednesday named the king's daughter Princess Cristina as a suspect in a corruption case involving her husband and which has been plaguing the Royal Palace for two years now.

The Palma de Mallorca court said that the 47-year-old princess is to be called in for questioning on April 27. She has not been charged with any offense.

Investigating magistrate Judge Jose Castro said that the princess was a board member of two of her husband's companies and that there were indications that she was aware that her husband used her name and status in his dealings, from which both benefited.

He said that for the probe to be complete and to show that justice treats all equally she would have to be questioned.

Her husband, Inaki Urdangarin, and his former business partner, Diego Torres, allegedly funneled about (EURO)5 million in public funds to companies they controlled. The two ran a non-profit body called the Noos Institute, of which the princess was a board member, through the funds were channeled.

Urdangarin hasn't been charged with a crime, but is a suspect in the case.

Get her a job at Burger King. She'll be fine.

"I like the clown world stuff this guy does at the end of his vids. Nothing like ending on a funny…"
8 hours ago

"This bitch is bringing her Own self Down to the ground. Everything unravels before her and…"
11 hours ago