In Malta, anyone who whistle blows on any political corruption/corrupt politicians is either gagged by getting framed or murdered like Nardu Debono, Wilfred Cardona, and most recently Daphne Caruana Galizia.

This blog confirms that former Malta Police Commissioner Michael Cassar acted in a corrupt manner when he was in charge of the investigations Corrupt Disgraced Former EU Commissioner John Dalli falsely and maliciously accused me of in November 1999.

John Dalli framed me in revenge and out of spite because I reported his involvement in the Daewoo scandal to the then Prime Minister Eddie Fenech Adami and the police. Michael Cassar and the police officers responsible for the investigation into the charges brought against me committed perjury on numerous occasions in the criminal and constitutional proceedings.

Prior to June 1999, Maltese mainstream media were regularly publishing articles about the Daewoo scandal and so was the Labour Party radio and TV station. Approximately 1,500 Daewoo clients were defrauded of their HP payments amounting to a total of LM1, 490, 442.83 (€3.5 million).

The media were also reporting on the loans and overdraft facilities (€37 million) granted by the Bank of Valletta which were secured on inflated assets' valuations. 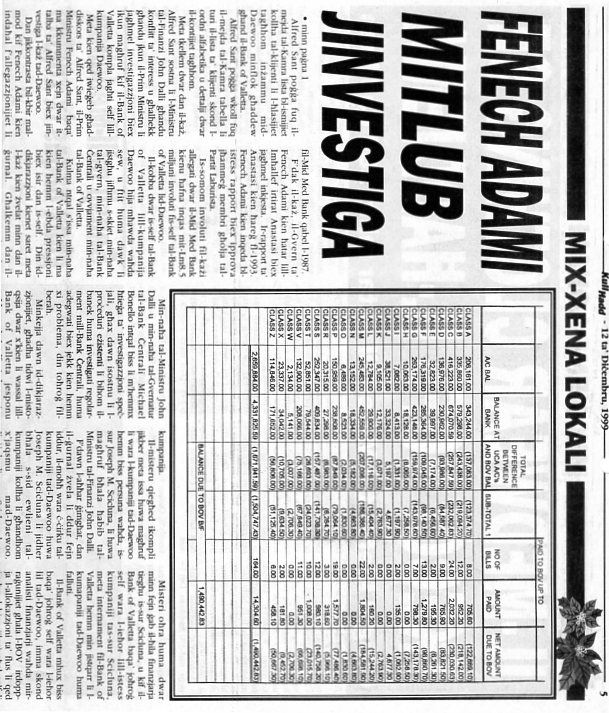 On the 11th December 1999 Dr. Alfred Sant, the leader of the opposition, had placed a detailed reconciliation in parliament. The document gave the names, ID numbers, client account numbers, and the individual amounts that the company had defrauded from each client.

It was 2.00 pm on 15th November 1999 when Michael Cassar (at the time he was assistant police commissioner) turned up at my door with Inspector Raymond Cremona, Inspector Paul Caruana, Inspector Kevin Ellul Bonici, PC Arthur Mercica, and another two SS (secret service officers) who remained in an unmarked vehicle outside my home.

I had been suffering from renal colic (kidney stones) all morning and had been taking very strong pain killers prescribed by my doctor.

They spent four hours searching our four-bedroom home, in the process scaring our eleven-year-old daughter and upsetting my wife. They confiscated all my IT equipment and other items. After they had searched my study they brought in the two SS officers to search the rest of my home.

The only evidence that had any connection to these letters was a piece of paper that Dalli had given me previously when he had asked me over to his ministry. He confirmed this in his witness early in the criminal proceedings.

I was taken into custody and held at the police headquarters in Floriana without being cautioned.

We entered a room that was no bigger than 10ft X 7ft. There were two desks, one at the end of the room the other placed in a T shape touching it. In the left corner was a filing cabinet with loads of files on top. On the right some shelving with more files.

Inspector Raymond Cremona sat behind the desk at the end of the room banging away on a typewriter. Inspector Kevin Ellul Bonici sat behind the other desk with me sitting in front of him. Inspector Paul Caruana stood behind me while PC Arthur Mercica sat on a chair next to the desk where Kevin was. It was a tight squeeze.

When they started questioning me I asked for a solicitor however, my request was refused.

We were chatting while they were also asking questions to which most of the time I would answer by telling them to investigate John Dalli's involvement in the Daewoo millions and the irregular loans (€37 million) granted to the company secured by inflated assets' valuations.

Corrupt Assistant Police Commissioner Michael Cassar was coming in and out of the office asking me questions. It was obvious that he was taking instructions from someone else.

The questioning went on until 10 pm. I was taken to Valletta's lock up but they said it was full. Prior to leaving Inspector Raymond Cremona presented me with a statement and asked me to read it and sign it. I refused to do so stating “that's not my statement”. The questioning and whatever happened in that office were not recorded. As the Valletta lock-up was full I was taken to Msida police station. There was only one police officer on duty.

I was locked up in a cell behind the front desk. The cell was small damp and filthy with an old iron bed and very dirty blankets. There was also the occasional rat running around.

From the time I was taken from my home and during the questioning, I was under the influence of very strong pain killers.

At approximately 1.00 am I started to feel very unwell. I was so bad the duty officer phoned an ambulance. I was taken to St. Luke's hospital accompanied by three police officers. One of the officers was WPC 466 (Rita Bartolo). She was married to a doctor who had examined me several times in the past. I informed her of this and she phoned him to confirm that I did suffer from renal colic.

At the hospital, the duty doctor examined me, had an ECG, urine test that confirmed there was blood in it. I was administered a pethidine injection and was given two Volteren tablets to take with me.

The duty doctor wanted to keep me in for observation. WPC466 phone Michael Cassar to authorise her to leave me in hospital but he refused so I was taken back to Msida police station.

t was the morning of 16th December 1999 while I was being held in custody and escorted by police officers to the hospital that Nationalist Party Mario Galea MP was involved in a serious car accident on St Ann's Street, Floriana about 10 minutes walk from police headquarters.

The police dealing with his accident had found hundreds of anonymous letters in his car which he was distributing across the country.

Being a very senior police officer Michael Cassar would have been informed about this incident and the anonymous letters found in Galea's possession. However, being the corrupt police officer he is he failed to charge Mario Galea MP.

It must have been 3.00 am by the time I was returned to Misda lock up. At 5.00 am the night shift finished. When the duty officer came I asked him to phone my wife and inform her where I was being kept.

At approximately 9.45 am my wife arrived at Msida police station and brought with her the painkillers my doctor had prescribed. Soon after two CID arrived and took me back to police headquarters in Floriana. Up until then I had hardly slept or eaten anything.

When we arrived at police headquarters I was taken back to the same crappy cramped office. Despite being under the influence of strong pain killers, in pain, and hardly having slept, Inspector Raymond Cremona continued to question me without recording the conversation.

I kept telling him that it wasn't me the police should be investigating but those involved in the Daewoo scandal, especially Corrupt Disgraced former EU Commissioner John Dalli.

Cremona banged out another statement and gave it to me and sign. I refused to read it or sign it. Whatever he wrote was not my statement.

It was early in the afternoon approximately 2.00 pm when it was decided to take me to the Valletta lock up. At the time I was so tired and unwell that I nearly passed out when I was being taken to the police car.

When we arrived at the Valletta lock up I was put in a cell. The blankets on the bed stunk there was no light. In the corner was a bucket that smelled badly of sewerage. I was in such a bad state that the police officer in charge had to call a doctor. When the doctor arrived, he examined me and gave me a pethidine injection.

Later that afternoon I was taken back to police headquarters. I spent a long time giving handwriting samples in the presence of a handwriting expert and Inspector Cremona. They took a saliva sample, had my fingerprints and photo taken.

Later I had found out that they had brought my wife in to give a handwriting sample. She was not held as they had come to a decision that her handwriting did not match any of those on the envelopes.

It was about 7.00 in the evening by the time it was decided that I should be taken back to Valletta lock up. Later that evening my wife turned up with a couple of rolls for me to eat which she left with the duty officer.

Much later that evening I ate the rolls that my wife had brought and left with the duty officer. This was the first nourishment I had had in almost 48 hours. Due to the smell in the cell, tension, and distress, I hardly slept.

At approximately 9.00 am on 17 November two CID officers arrived and took me back to police headquarters. Inspector Cremona interrogated me for a short period. He did his utmost to get me to admit to a crime I did not commit.

Ivan Formosa the handwriting expert arrived and I was asked to give more handwriting samples while he dictated. This went on until 11.00 am. Soon after I was arraigned in court, I was charged and released on bail with an impediment on my departure.

While I was being held in custody Corrupt Disgraced Former EU Commissioner John Dalli gave several press conferences on the national TV station asking the public to take any letters they might receive to the police. On the 16th and 17 March 2000, two articles were published in the Nationalist Party newspaper In-Nazzjon confirming that the stationery used came from parliament. John Dalli and his cronies had access to parliament's stationery. I certainly didn't.

ALL THE EVIDENCE CONFIRMS ONE THING; FORMER POLICE COMMISSIONER MICHAEL CASSAR IS A CORRUPT POLICE OFFICER.

I was acquitted of all the criminal charges brought against me. As the most senior officer in charge of the investigation both Michael Cassar and PC 956 Andrew Caruana was responsible for having the case purposely delayed.

Although I was acquitted I found it very difficult to find employment. We were also very concerned for our safety. We had no option but to return to the UK permanently.

On the rare occasion, we still visit Malta. However, having experienced the vindictiveness and unacceptable manner my family and I have been treated by the authorities and Corrupt Disgraced Former EU Commissioner John Dalli we are always looking over our shoulders while we are there.

Daphne Caruana Galiza, Wilfred Cardona and Nardu Debono were all whistleblowers and all murdered. This makes me concerned for my family's and my safety. DTOM All the problems with Google links have been solved.

I'm a tad disappointed as some of the blog links are blocked by a Google sign in wall.

This level of corruption seems to be the accepted norm everywhere.

I would go as far as to say that - everywhere - the system is under the control of criminals  and the sooner people realize this unpalatable fact , then they might take the action that is required.

luggnutz commented on Chris of the family Masters's blog post BRUSSELS - WHAT REALLY HAPPENED? [mirrored]
"I've done my best to try and warn the trucker's FreedomConvoy about this since something…"
13 hours ago