Not to deter or belittle the loss of 1? life from this real accident, but just bringing up a point that this is the way large buildings go down when a true accident happens,just a friggin mess, haphazardly different levels of stress, not a symmetrical decline, hell, in that very first few sec's of footage, what did ya see??...a tall chunk of building actually falling over and covering some major horizontal yardage, glad to see the genuine laws of physics actually being applied to a building like it's supposed to when shit goes bad... Then look at the tragic "Death Toll" of this horrible travesty....  ONE, that alone spells R-E-A-L

that 3 part phony Act of "Terrorism" performed LIVE, in front of a live World Studio Audience, Starring Israel, The Saudi's, the dual citizenship PNAC crowd, and the Cheney Administration they performed 18 years ago should now be more prevalent than ever!! 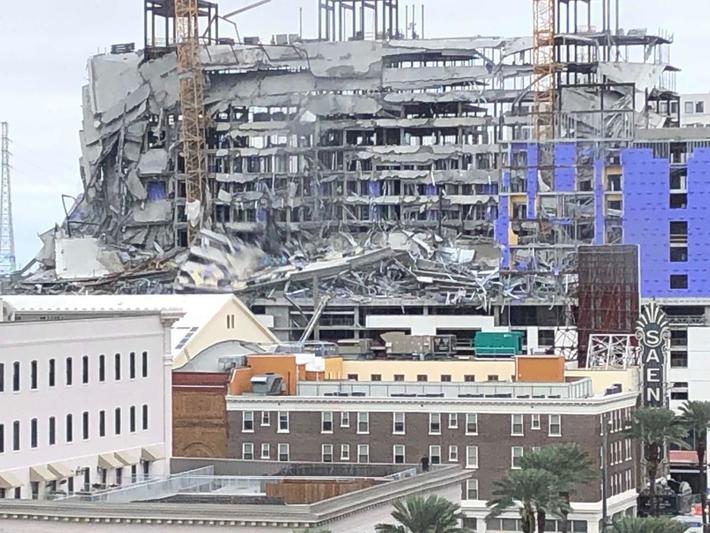 According to emergency medical services officials, two people are dead, one person is missing, and 18 have been taken to an area hospital for treatment.

According to NOFD officials, the person who remains missing in the building is in an area that is unsafe to access at this time.

The body of the second person was was reported missing was located in the building, but has not been removed at this time due to safety concerns.

The NOFD said that a further collapse of the building is a strong possibility.

A press conference is scheduled for Sunday morning tentatively at 10 a.m. 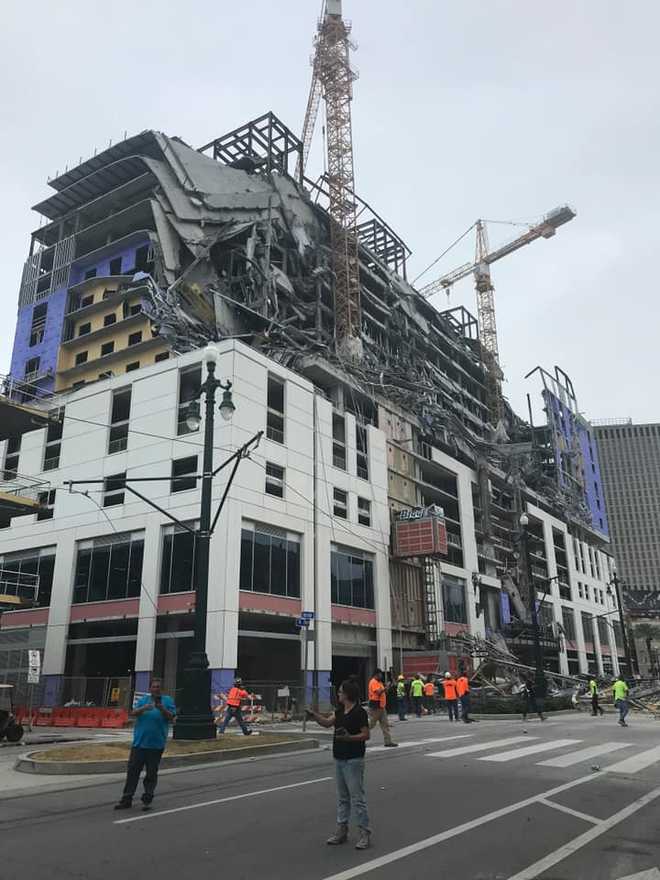 The city of New Orleans said the frame of the building is considered stable but is unsupported, therefore the situation is considered dangerous and mandatory evacuations have been issued.

Evacuations have been ordered in the areas in red in this map:

NEW: aerial picture of the collapse. My goodness. @wdsu ( 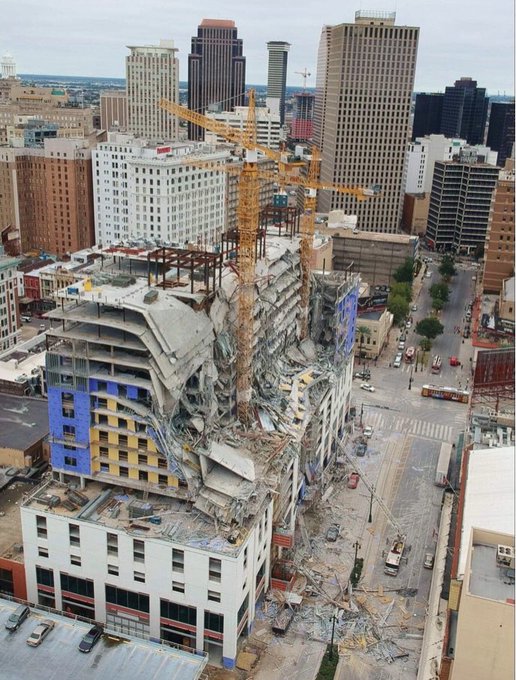 JUST IN via @nolaready: The @NOLAFireDept is evacuating buildings in the red zone by the Uptown side of Bienville, River side of Basin, Downtown Side of Canal and Lake side of Burgundy. If you are in this area, evacuate now! Orange area closed to traffic. @wdsu

33 people are talking about this

Streets being evacuated include buildings in the red zone by the Uptown side of Bienville Street, river side of Basin Street, Downtown side of Canal Street and lakeside of Burgundy Street. 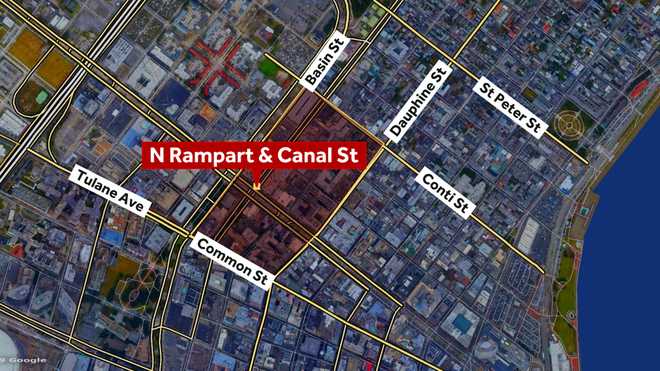 The RTA is also temporarily relocating all central hub operations to RTA headquarters located at 2817 Canal St. where the Emergency Transit Center has been set up. The RTA has implemented these changes to minimize the burden to its riders while continuing to provide safe, reliable service.

Streetcar service is suspended/altered until further notice for the following lines:

Central Transit Hub will be Temporarily Relocated to RTA’s A. Philip Randolph facility at 2817 Canal Street:

Beginning at 4 a.m. on Oct. 13, the RTA is implementing additional adjustments to minimize the burden of this disruption to riders: 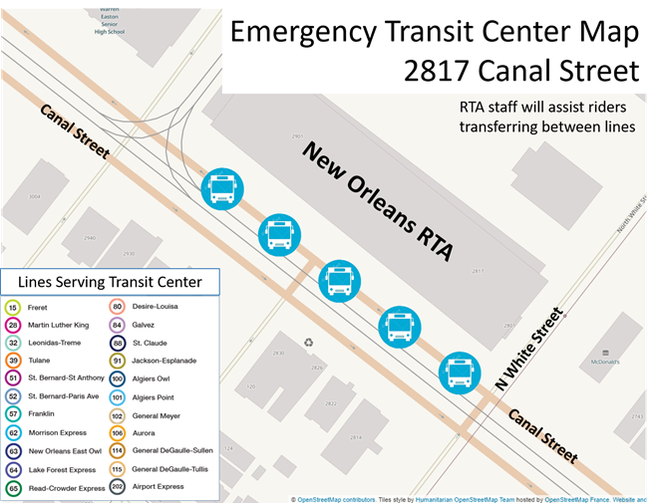 #Alert the @NOLAFireDept, @NewOrleansEMS & @NOPDNews are responding to a partial structure collapse at Canal & N. Rampart. This is an active scene. Please avoid the area & listen to public safety officials.

56 people are talking about this

Hard Rock International released the following statement regarding the collapse:

"Citadel Builders LLC was contracted by Kailas Companies, owner of the project, to build the Hard Rock Hotel based on a brand licensing agreement with Hard Rock International, the future manager of the hotel.

"Hard Rock has had no involvement in the construction of the project. We want to extend our deepest sympathies to victims of this tragic accident and to their loved ones and friends."

1031 Canal Street issued the following statement regarding the building collapse:

“Our highest priority is the care and concern for the families involved. While there are many questions that are unanswerable at this juncture, our prayers and sympathies are with the good men and women who have been affected. We are hopeful that the thoughts and prayers throughout the community will help us through these initial days as we begin to work with local authorities and the General Contractor to identify the causes of the incident. We thank the first responders for their quick actions to assist those in need.”

Mayor LaToya Cantrell released the following statement regarding the building collapse on a construction site downtown:

“Today’s collapse was a tragedy, and our hearts break for the loss of life,” said Mayor Cantrell. “Our focus is on continuing to secure the site and to doing everything we can to support the families impacted as rescue efforts continue.

“All residents should continue to stay away from the area, and to heed the street closures and traffic warnings. We appreciate the public’s response and support, and we are praying for the victims and their families.”

Wow. I'm glad if I make a mistake, the worst thing that happens is a bathroom floods. Although, yeah, if I wire something badly, the house could burn down.  In any case, remember the residential skyscraper that burned for 24 hours and never fell. For my money, Judy Wood and John Hutchison explain 9/11 very neatly/.

Wow, and this should show everyone Why they should attend to safety cautions.

"Those children look thrilled, and the little guy got the hell away quick.  lol"
3 hours ago

"NATO was created to oppose Russia and for decades kept encroaching on Russia.  NATO are…"
5 hours ago