After 100+ Years Of US/UN Intervention, Haiti Is Collapsing

Since the Haitian Revolution achieved its goal of independence from France in 1804, the country has experienced a series of invasions, including a two-decade US occupation from 1915 to 1934. Then, a US-backed dictatorship from 1957 to 1986. Next came two Western-backed coups against the liberal former president Jean-Bertrand Aristide in 1991 and 2004, and a UN military intervention from 2004 to 2017.

These incursions have hindered Haiti from regaining its sovereignty and from enabling its citizens to live honourable lives.

Every attempt by the Haitian people to leave the neo-colonial system that the US military occupation (1915–34) instituted has been met with military and economic measures to keep it in place for more than a century.

After the assassination of the then president Jovenel Mose, (Ariel) Henry was appointed to his position in 2021 by the “white colonial powers” or to be more precise, by a group of six nations led by the US, the European Union, the UN, and the Organization of American States.  In order to intervene militarily in Haiti, the United States and Canada are currently arming Henry’s illegitimate administration.

For the Haitian people, whose progress is being halted by gangs formed and promoted covertly by the Haitian oligarchy, supported by the imperialist power, and armed with weapons from the United States, another such intervention in the name of “human rights” would only affirm the neo-colonial system currently run by Ariel Henry.

The people of Haiti have endured the US-backed dictatorship of the ruling Haitian Tet Kale Party (PHTK) that came to power through the fraudulent election of Michel Martelly in 2010 and maintained its grip on power through the fraudulent election of Jovenel Moise in 2016, what Haitian activists refer to as electoral coup d’etats. Both elections were held under UN occupation and sponsored by the US government.

Which led to today's situation in Haiti:

Last 10 remaining senators leave office, with gangs controlling much of capital, a malnutrition crisis and a cholera outbreak.  Haiti – which is currently engulfed in gang violence and the worst malnutrition crisis in decades – now officially has no functioning parliament as the senators were the last of 30 to remain in office after successive failed efforts to hold elections.

At a summit in Mexico City on Tuesday Joe Biden was expected to lobby Justin Trudeau for Canada to lead an international security force – in part to help stem the flow of Haitian refugees reaching the US.

Haiti left with no elected government officials as it spirals towar...

Looks like the US and UN have created a crisis where they need to go in and "help".  Maybe they'll call in The Clinton Foundation if there's anything left to pick off the bones. 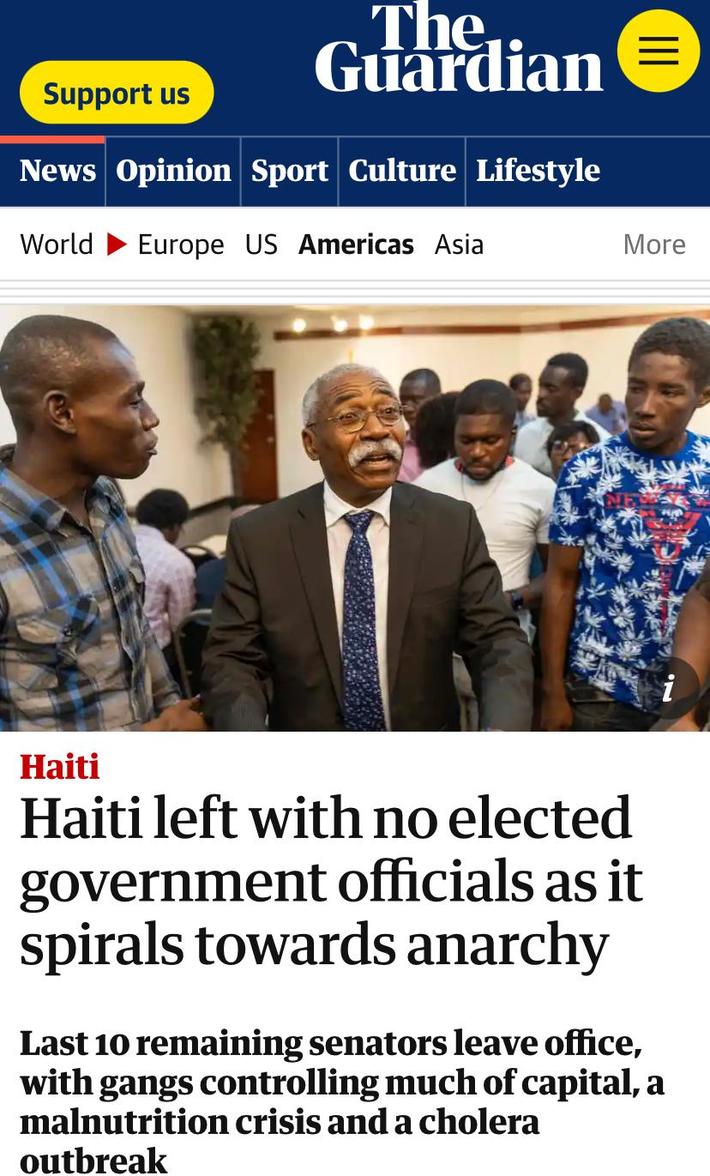