(NaturalNews) A key chemical of one of the most horrifying elements of the Vietnam War -- Agent Orange -- may soon be unleashed on America's farmlands. Considered by world nations to be a "Weapon of Mass Destruction" (WMD), Agent Orange was dropped in the millions of gallons on civilian populations during the Vietnam War in order to destroy foliage and poison North Vietnamese soldiers. The former president of the Vietnamese Red Cross, Professor Nhan, described it as, "...a massive violation of human rights of the civilian population, and a weapon of mass destruction."

A key chemical in that weapon -- 2,4-D -- is just months away from being dropped on agricultural land across the United States. Dow AgroSciences, which along with DuPont and Monsanto is heavily invested in genetically engineered crops, has petitioned the U.S. governmentto deregulate a variety of GE corn that's resistant to 2,4-D, which comprises 50% of the recipe of Agent Orange.

As a Viet Nam Veteran with a positive result in a medical biopsy indicating a level of dioxin at 1875 ppm, I was fortunate to have begun homepathic treatment within several years of leaving Viet Nam for the last time. Learning of the results it also made me aware through the decades just how bad 2-4-D is for all living things. Many fellow vets have died horrible deaths from varieties of cancers. The truth on the toxicity of dioxin is out, and even using the lower formula of "Roundup", you are destroying the balance of nature with a toxi that has a half life of 8 years. Repeated applications to control weeds or crops leaves a strong residual that will be a poisen for longer than one generation. Stop poisening people or admit they want to reduce the population numbers . TRUTH sux y'all.

Its called population control. The whole worlds food supply is under massive attack from mad men.

here is a link to a very short (just over 2 min) youtube video that shows the continuing problem of agent orange/dioxin - http://www.youtube.com/watch?v=Zx1f9hebiGg&feature=player_embedded 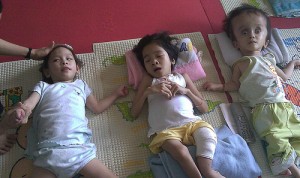 If you following the 'posting'  trail you should come to the original submission,  194 page pdf file.  They invented a 'corn variety' that was resistant to any other spray, now they have a plant that they do not want..  What is new?  We have the 'Cane Toad'  here in Australia ... it must have water to survive.. so in good times it spreads.  Well, there is an alternative to 'Spraying a deadly herbaside,'  it is called weeding.

Hoe it out, pull it out, or just harvest the seed and use for ethenol.. Live with it Suckers!

Why anyone would wonder if they are going to hell is beyond me.  We are in hell.

Apparently because they think they are God, and can do whatever they want

They want to stave us .. so we will be dependent on them.. or just kill us off..  Duh! NWO business as usual..

People just don't want to believe it.. PREPARE OR DIE!

You haven't been following this stuff very long, have you, graeme sutherland?

This makes no  sense whay would they do such a thing?