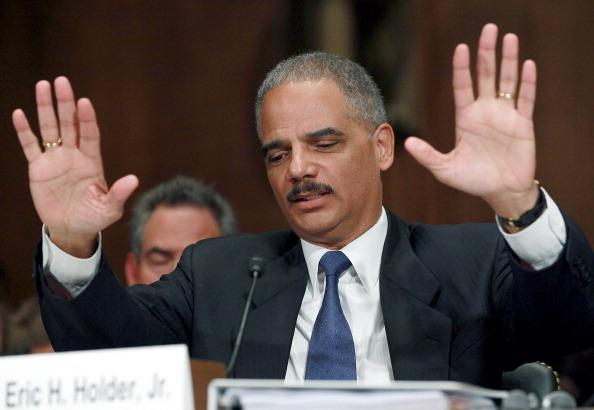 When polled for their opinion a 76%  for and 17% against ratio demonstrates that the man on the street typical American is fed up with the continuing controversy over recent exposure of Benghazi, the IRS intimidation of conservative groups, White House ordered surveillance of AP and Fox news  journalists. What American voters want is accountability from President Obama and Democratic policy makers within federal agencies who have allowed radical agendas to invoke censorship, violations of citizen’s rights, and even allow Americans to die when it suits the political designs of this diabolical administration.

The evidence is in

US Attorney General Eric Holder will be held on charges of perjury over ordering the surveillance of news reporters under his fabricated allegations that reporters could be guilty of violating a 1917 anti-espionage act. Holder lied to Congress under oath under at least two counts maybe more. Still, we are reminded that the Attorney General was allowed to get away with stonewalling Congress for more than 18 months over his knowledge of Fast and Furious and was saved only by executive privilege invoked by President Obama. Just as in the Watergate Scandal back in 1973 during the Nixon White House after the President fired AG Archibald Cox, a special prosecutor was then appointed to insure an objective and nonpolitically vulnerable litigation process. Today the same situation looms. Obviously, AG Eric Holder is not going to recuse himself nor is he going to allow the Department of Justice to conduct a fair investigation.

If, as Democrats charge, that nothing criminal has been done in the IRS why did Director of Exempt Organization Division, Lois Lerner, take the Fifth Amendment to escape interrogation by Congress? Already, the IRS commissioners who participated in the cover up of targeting any Patriot or Tea Party organization seeking perfectly legal non-profit status, have denied documented accounts of these actions after testifying previously to Congress months before and denying their knowledge of such activity.

No way to escape

These scandals, all emerging with ferocity and demands for the truth will not go away as the US media and Democratic officials would like. Why aren’t the deaths of federal diplomatic employees important enough to investigate Mrs. Clinton? Why did the US federal government engage in the illegal surveillance of US media reporters Mr. Holder? Mister President, what were you doing for the next 8 hours after you were briefed over an all-out attack on a US Consulate in Benghazi, Libya that was threatening the lives of many Americans taking refuge in a poorly defended building? Could you enlighten us, Commissioner Schulman over why it was necessary for you to make 218 visits to the White House? Could it be that the disposition of a campaign to intimidate and obstruct conservative groups from seeking exempt status required lots of advisory between the President and an out of control taxing authority’s head executive?

The questions over the actions of certain high level officials  and what motives could have been behind their efforts at obstructing justice is now very much on the minds of not only Darrel Issa, Chairman of House Oversight and Reform Committee, but other Republicans such as Congressman Trey Gowdy who are not buying the excuses and lame arguments that characterize the attempted dismissal by the Obama White House, who would simply prefer to carry on as they have for the last 4 years ignoring the law and making their own rules as they go along.

Death was not the end result of Watergate

I would like to remind those who see similarities between this multiple front battle of scandals that have come to light, and the obstruction of justice during the Watergate fiasco that there really is no comparison. The current turbulent climate that has enveloped the country as a result of the Obama White House’s radical statist agenda and Watergate during the Nixon years, do not share one fatal commonality. At least during President Richard Nixon, Americans were not allowed to be intentionally murdered by having rescuers ordered to stand down! At least administration officials like Gregory Hicks were not threatened against speaking about the ordeal to the public. At least the Middle East was not being engineered for the advancement of extremist Muslim takeovers. Yet, in light of these revelations in which there is no room for interpretation, still White House officials argue that it’s no big deal, we already covered this months ago, or so what if four Americans got killed!

These callous responses by Obama’s appointees epitomize the arrogant and lawless attitude of an administration, who refuses to acknowledge the US Constitution as it forces the people to endure a forced compliance with regulations and laws invoked by czars, appointed leftist federal judges, and officials not elected. These non-elected activists who value little the Constitutional heritage of America have furthered an ever encroaching rule that stifles freedom and free enterprise and enables the suffocating influence of a leviathan federal government who growth is out of control! Big government replete with corrupt agencies like the EPA and IRS who are free to exercise their vendettas against those politically opposed to them are sealing the fate of America. They are by-passing the delegational process of Congress who is constitutionally tasked with the true powers of legislation and implanting their own directives which do not involve the will of the people.

Americans, who have always known the dignity of making their own choices, exercising their individual freedoms, and pursuing their happiness are now being dictated to over so many matters in their lives that the Constitutional republic that once stood to protect them from this tyranny has been compromised by appointees with their own ideologically opposed agendas that do not reflect our inalienable rights as guaranteed to us by the US Constitution. This transformation is not for the good of the people. This is about advancing government sanctioned control over our lives. Just as Obamacare is not about the quality of healthcare or the Hippocratic oath that makes medicine a humanitarian practice, it’s about the biggest takeover of our liberties ever attempted by a US federal government. Using a draconian taxing entity, the IRS, to administer nationalized medicine, a much different intention has been unleashed.

Betrayed by our own government

The recent scandals that have been unearthed and presented to us by people who refused to have the truth buried under official denial exhibit a shocking realization that we Americans had better not ignore. That is that government indeed does not share our best interests that government seeks to perpetuate itself at the expense of the people, but does not necessarily serve the people that its constitutional even though its charter states that it should. Why? Because this federal government has submitted to an internal overthrow orchestrated by those opposed to the great American heritage of liberty and freedom.

The coup that occurred beneath our noses

These opponents of our forefather’s vision of a society that is motivated by the private sector without being overregulated and overtaxed by an irrelevant and overbearing form of oppression have succeeded in a coup that never should have been allowed to happen. So, as you hear the President continue to make claims that he is for the American middle class, take a good long look at his actions, and you will see his true agenda aimed at destroying the middle class and rendering our society beneath a leftist dictatorship that could not have been better inspired by the Communist Manifesto of Karl Marx, who predicted the fall of western civilization because of big government, higher taxes, and over regulation.

rlionhearted_3 favorited Chris of the family Masters's blog post Stanford Study Results: Facemasks are Ineffective to Block Transmission of COVID-19 and Actually Can Cause Health Deterioration and Premature Death
6 hours ago