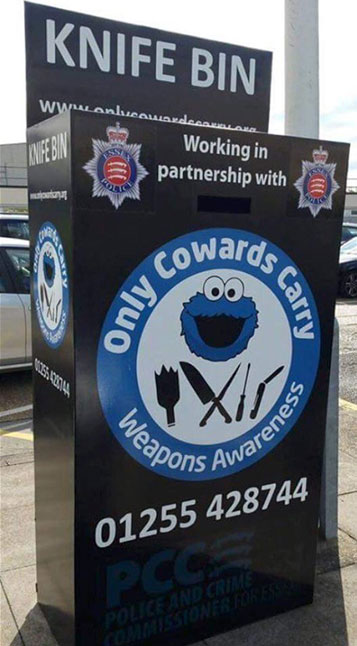 A Cookie Monster knife drop-off bin?
Do you mean to tell me someone thinks that Cookie Monster will to appeal to knife-wielding murders?
How old are the perpetrators? Six?
And if these knife crimes are being committed by six-year-olds the knife drop-off slot is a wee bit high for them to reach, don’t you think?
When I saw this picture on Twitter last night I thought for sure it was a joke.
Because who in his right mind would think “We need to stop knife murders! I know! Let’s use Cookie Monster!!”
It had to be a joke, right?
Nope. It isn’t.
I did a little searching and “Only Cowards Carry Weapons Awareness” is an actual charity in England. They even have a website.
And, yes. The Cookie Monster is on their official logo — which appears on their Twitter profile picture. I don’t know who does their marketing. But I’m guessing your average knife-wielding Syrian migrant or hardened street gang member probably doesn’t relate to Cookie Monster.
Then again, maybe in Britain criminals have a thing for Sesame Street. How would I know?
But really? What the hell does Cookie Monster have to do with knives?
It isn’t like Cookie Monster uses a knife and fork to eat his cookies. If I recall correctly, he just kinda shovels them into his mouth. But not with a shovel, mind. Just with his big, blue hands.
And that’s not even the silliest thing about this drop-off bin.
“Only Cowards Carry?”
When did it become a thing to accuse those who commit heinous crimes of being “cowards?”
Do we really think that calling them cowards will somehow be just the ticket to get them to disarm?
”Why, how dare you sir! I’m no coward!”
”You can call me an animal! You can even call me a monster! But never will I tolerate being called a coward!!!”
Do they think the noble knights of the Round Table are the problem?
I highly doubt people who commit murders with knives give a damn if you call them cowards.
Finally, this initiative is completely unwilling to admit what is at the heart of the problem in London’s rising murder rate.
I saw this on the “Only Cowards Carry Weapons Awareness” website: 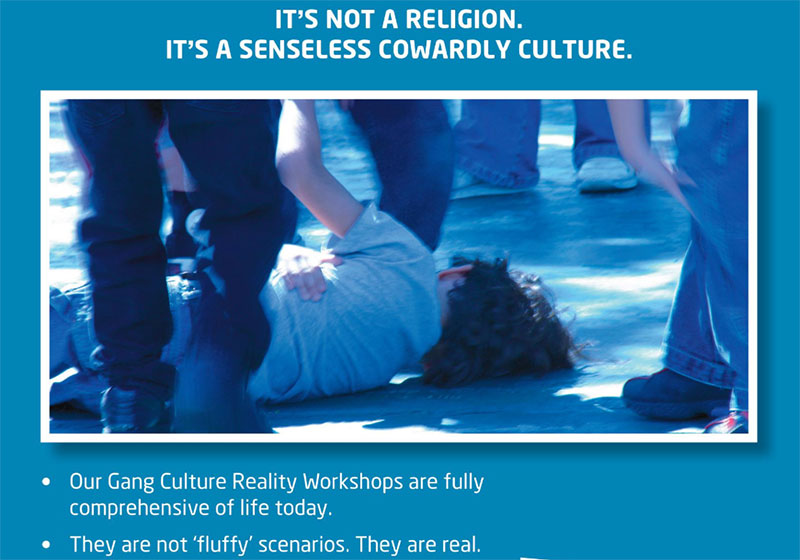 “They are not ‘fluffy’ scenarios,” says the organization using Cookie Monster in their logo.
It’s not a religion?
Heaven help the English people.

Comment by DTOM on April 14, 2018 at 8:18am
I can assure you that in my own experience the response by ethnic Brits to the face of Cookie Monster being featured on this campaign - was WTF!?

N.B - a pen knife is featured, despite most knives of this type being totally legal under existing UK knife legislation. Its obvious what the intended goal is. A passive native population who will die on demand for the PTB and their invader pets, so they can introduce more and more levels of control.

* https://www.avonandsomerset.police.uk/contact-us/police-stations/ba... - N.B - the number of languages that are not English or native to the UK.

Any publicity is good publicity.  Cookie monster is heading straight to the top, with a few more public service gig's,  he will be unstoppable.

Unbelievable! The world is run by insane psychopaths...

"WTF is anyone with a brain thinking about American leadership at that summit?"
3 hours ago

"Damn that's funny but having this ass clown in office isn't!"
3 hours ago

"I believe this will go down as my all-time favorite."
7 hours ago