The entire global status quo is on the cusp of the S-Curve decline phase. 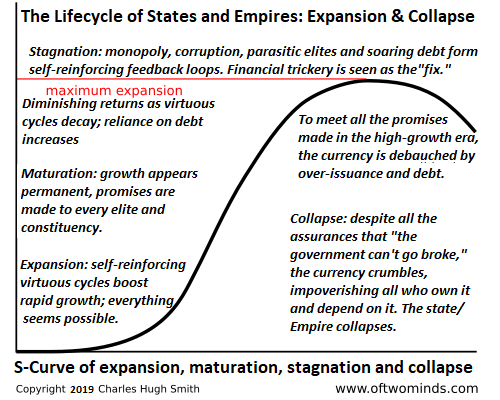 There is really only one unforgivable sin in the political realm, and that's destroying the official narrative by revealing the facts of the matter. This is why whistleblowers who make public the secret machinery of the elaborately artful lies underpinning all official narratives are hounded to the ends of the Earth.

Employees of state entities such as Ellsberg, Manning and Snowden are bound by vows of secrecy and threatened by the promise of severe punishment.Outsiders such as Assange are even further beyond the pale because they can't be accused of being traitors, as they never took the vows of secrecy required by the Deep State.

The single most damaging revelation to all the elaborate lies that make up official narratives is the truth revealed in official emails, documents and conversations. This is why virtually every document and correspondence is now "classified," so anyone releasing even a mundane scrap can be sentenced to rot in federal prison.

In a recent C-SPAN interview, author Nomi Prins explained the incredible difficulty of accessing papers in presidential libraries now due to virtually everything being classified. Freedom of Information Act (FOIA) applications must be filed, and researchers must wait years to gain access to routine correspondence that was freely available to all a decade or so ago.

Official paranoia has a 100% correlation with the amount of damage done to official narratives by any leaks of the facts of the matter. What are they so afraid of? Here's the dynamic in play: the more fragile the narrative, the greater the dependence on half-truths and lies, the greater the official urgency to crush all whistleblowers and maintain a Stasi-like vigilance against any murmurs of dissent or doubt.

If the entire contraption wasn't so vulnerable to exposure and so dependent on lies, why the infinite paranoia? This paranoia extends past the present system of lies into the past, as exposing the lies in decades past calls into question the official narratives of today.

Any doubt is extremely dangerous, as if even a single thread is pulled loose, the entire fabric of ginned-up statistics, false assurances, half-truths and outright lies unravels. Once the Pentagon Papers revealed the facts of the war in Vietnam, support for the official narrative collapsed essentially overnight.

In the immortal words of Jean-Claude Juncker, when it becomes serious you have to lie, and it's now serious all the time.

The entire global status quo is on the cusp of the S-Curve decline phase. Hence the vulnerability to disruption of its official narratives and the panicky paranoia of its handlers.

My book Resistance, Revolution, Liberation: A Model for Positive Change is now on sale: $4.95 Kindle edition, $9.95 print edition, a 33% discount. Pathfinding our Destiny: Preventing the Final Fall of Our Democrati... ($6.95 ebook, $12 print, $13.08 audiobook): Read the first section for free in PDF format. My new mystery The Adventures of the Consulting Philosopher: The Disappearance of ... is a ridiculously affordable $1.29 (Kindle) or $8.95 (print); read the first chapters for free (PDF). My book Money and Work Unchained is now $6.95 for the Kindle ebook and $15 for the print edition. Read the first section for free in PDF format. If you found value in this content, please join me in seeking solutions by becoming a $1/month patron of my work via patreon.com. New benefit for subscribers/patrons: a monthly Q&A where I respond to your questions/topics.

The music industry tried to stop the player piano, the victrola, the casette tape, and the internet. The movie industry went after the VCR snd the internet.  The Catholic church and the aristocracy of Europe tried to supress the invention of the printing press. All of these things failed and I think the internet suppression will too. It will likely be a shit storm back and forth for at least the next 20 years though.

When my Govt. goes into 'elaborate lie mode' they take the DIY approach, and hope for the best. They will try to censor the entire world internet singlehanded to stop the truth, but forget about the local paper in their haste.

Their loved ones were murdered on 9/11. Twenty years later, they are still fighting for the truth.ABOUT THE DOCUMENTARYDirected by Dylan Avery and produced b...
51 minutes ago
0 Comments 0 Favorites