The Australian Government has now been labelled as the most intrusive government in the western world.

It has been revealed that on a per-capita basis, the Australian government spies of its citizens more than any other western government.

In 2010-2011, more than 3,400 Australians had been spied on by more than 17 government law enforcement agencies. This includes state and federal police agencies, the Australian Tax Office (ATO) and Medicare.

The shocking truth is that these government agencies can access telephone and Internet data records without a warrant from a judge.

On a per capita basis, the Australian government is more than 18 times likely to intercept telephone calls than the United States government (Source: Sydney Morning Herald).

Even more disturbing, these government agencies accessed telephone and Internet data records an astonishingly 250,000 times without even recording why and when these intercepts had taken place.

A representative of the Australian Federal Police, Assistant Commissioner Neil Gaughan, claimed on Australian national television that this alarming level of spying is ok because:

What Neil Gaughan failed to mention was that the power to grant warrants was taken away from judges and given to the administrative appeals tribunal, making it easier to obtain warrants.

In reply to Neil Gaughan, Cameron Murphy from the NSW Council of Civil Liberties was quoted as saying:

This therefore means that the remaining 3,473 warrants issued to spy on Australians had been issued by members of the administrative appeals tribunal, an unethical organisation that is composed of private citizens who are appointed by the government.

Cameron Murphy from the NSW Council of Civil Liberties also made a valid observation that:

Police, and other law enforcement agencies can (at any time) retrieve the data they have gathered to work out where you have been, where you have made a call from and who you have called

To highlight how far down the rabbit hole the Australian Government has fallen, the latest annual report from ASIO (Australian Security Intelligence Organisation) highlighted that it completed more than 2,900 intelligence reports, 575 reports on threats from the Arab spring, G20 Summit in Korea and Commonwealth Games in New Delhi and various reports on the implication of Osama Bin Laden’s death for Australia.

Considering Australia’s population is only around 22 million, why is there such a blatant need to invade the privacy of ordinary Australians on such a grand scale?

The high probability that law-abiding Aussies are being spied on is no surprise. Since 2005, the workforce of ASIO has increased by a whopping 62%.

Even more disturbing than the number of telephone intercepts in Australia and the size of ASIO is the fact that Australia’s law enforcement agencies claim that someone committing an act of terrorism could be someone who “destroy(s) trust and to spread(s) fear and paranoia”.

How many Alternative News Blogger’s fall into this category? Who knows, maybe the Globalist Report is being monitored by ASIO.

Therefore, if the Australian Government has the willingness to commit such violations, then how much more willing must organisations like the United Nations be to limit the right to privacy of everyone else?

Just like in the US, Canada and Europe...the Australian people are only going to take so much. Very soon the sheep will wake up on morning and will finally gaze on the reality that has been imposed on them. On that day, when the PTB reap the whirlwind, it will become very apparent why THEY are so desperate to destroy US.

It's getting worse ... metadata retained now for two years, used to be six months or less. Extra cost in millions

Australians will have two years of their metadata stored by phone and internet providers after the Abbott government's controversial data retention laws passed Parliament.

Love the pyramid in the centre!

The competition winner was the Philadelphia-based architectural firm of Mitchell/Giurgola, with the on-site work directed by the Italian-born architect Romaldo Giurgola

Our politicians have never had faith in their own citizens - never to be encouraged to do anything for ourselves except to know our station as eternal slaves. Politicians democracy down here 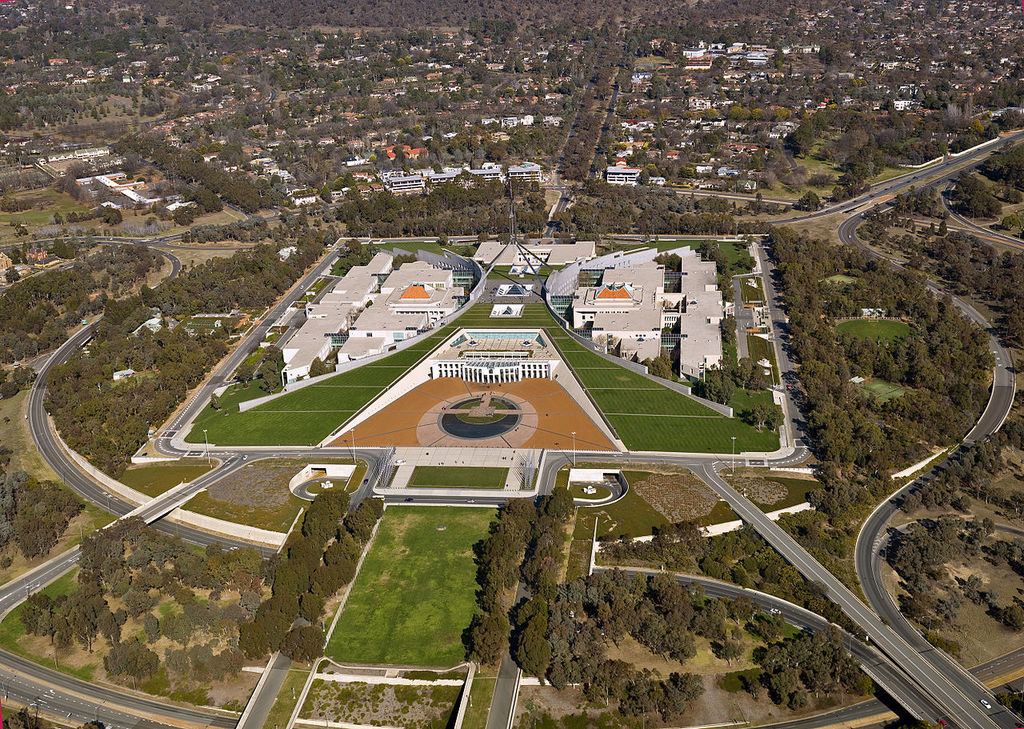 Love the pyramid in the centre!

Peter, this system has been in place in Australia since the 80's with the establishment of the Deacon Centre telephone exchange in Canberra, that was exposed by Peter Sawyer, a high ranking civil servant.

Allegedly, the Deacon Centre has been collecting financial, economic, military and political information, not only on all Australian citizens, but all inhabitants in the western world.

Why has Canberra got 2 parliament buildings? At the time of the second's construction, Australia only had 18 million inhabitants...why the massive expenditure on a building that was not required? Unless there are larger plans for it in the future?

Sawyer claimed that the Rockefellers built 20 luxury residences in a national park (Namadgi?) in Canberra, with full permission of the Australian authorities.

Supposedly come WW3, Australia is the safest place to be.

Smack bang in the centre of the country at Alice Springs you have Pine Gap, the joint US/Aus Joint Defense Space Research Facility - the safest place on the planet for the elites to bug out to.

"To highlight how far down the rabbit hole the Australian Government has fallen ......." LOL

"Police, and other law enforcement agencies can (at any time) retrieve the data they have gathered to work out where you have been, where you have made a call from and who you have called"

Using a mobile phone down here means you've got no where to hide. I suspect that's how they're catching crims much more quickly nowadays. Only a matter of days and they close in on someone you thought would take months or years to apprehend

The general perception of the public is that these security measures are for radical Muslims and pedophiles, but....

The prevailing attitude by the politicians, the cops and the security agencies is that the entire general public must sacrifice liberties and privacy in order for the cops/spooks to obtain better and more efficient outcomes ... sadly nobody knows where the red line is on that. Since the parliaments, cops, spooks and much of the public who are in agreement, are all in cahoots with one another, there's hardly anyone left to challenge them on their fascist ways

The UN ? they're just brainwashing our politicians who are becoming schizoid from it all....

schizoid |ˈskitˌsoid|adjective Psychiatrydenoting or having a personality type characterized by emotional aloofness and solitary habits.• informal (in general use) resembling schizophrenia in having inconsistent or contradictory elements; mad or crazy : it's a frenzied, schizoid place.

I feel sorry for them

Less Prone favorited Central Scrutinizer's blog post CNN-NPR Photo-Journalist Jade Sacker was Embedded with Antifa Leader John Sullivan During Siege of US Capitol – Cheered “We Did It!” After Inciting Riot
3 minutes ago

Less Prone left a comment for MAC
42 minutes ago