Leaders of the global banking cartel have publicly stated that they are planning to impose charges on depositors should the U.S. Federal Reserve cut the interests rate it pays banksters for deposits it holds from individuals and companies. Meanwhile, Federal Reserve Board Governor, Daniel Tarullo, proposed this week measures to avoid what he called “massive runs on the banks”. 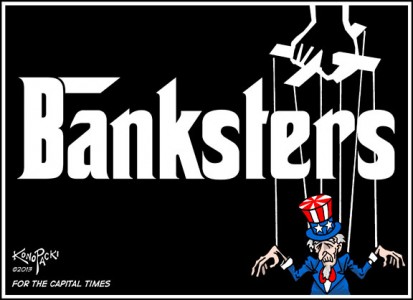 As it is well known, the United States Federal Reserve, the head of the international banking cartel, pays banks interests on the amount of money they hold from depositors. Some Fed representatives have circulated the possibility of cutting the payment of those interests, which prompted the banks to propose measures to sequester the money that belongs to individuals and companies alike. A possible solution to the potential cut in interests, according to bank heads, would be to charge depositors a fee for maintaining their accounts open should the Fed decide to reduce the payments.

Earlier this year, rumors told of the possibility that the Fed stopped, partially or completely, pumping fake money into the markets at the rate of $85 billion a month, which is the only articificial lifeline that the central bank has in hand to keep a moribund economy afloat.

As a result of the inflation of fake currency, the stock market has seen record highs, even though employment and industrial production continue to show that the American economy, and the world economy as a whole are in deep trouble. Last October, the Federal Reserve, which is a private banking entity, entertaned the idea to taper the pumping of free money early in 2014, which sent a loud rumble of fear all throughout the global financial markets.

If you recall last year, there were thousands of dead people that voted in the primary and general elections.  Despite efforts of Republicans to clean up voter registration rolls to eliminate dead people, non-citizens and convicted felons, US Attorney General Eric Holder used his Justice Department to block all cleanup efforts.  After all, the Democrats needed all of the dead people’s votes along with the votes of convicted felons and non-citizens in order for Obama to win re-election.

Now we are seeing the opposite problem with the Obamacare exchange program.  Living Americans are being denied healthcare because the government has declared them dead, even though they are alive and well.  It seems that every month the federal government declares at least 750 people to be dead when they are very much alive.  With the new government databases for healthcare, being declared dead has a drastic negative impact on a person’s ability to seek medical treatment and it’s even affecting their doctors.

Here is how the problem works.  The Social Security Administration maintains a Death Master File which is then shared by a number of other government agencies including Medicare and the IRS.  When the SSA receives a notice that someone has died, they automatically enter the information into their master file without any verification of the information.  Once a death has been wrongfully entered into the system, it is very difficult to get it corrected because it has already been disseminated to other agencies.  Dr. Lawrence Huntoon, a neurologist from Derby, New York explained:

Doc Vega commented on Doc Vega's blog post Robot Companion Coming To Your Town Soon
"James, okay Buddy I leave it to you Ha!"
1 hour ago

Pete Buttigieg appeared on the national stage out of nowhere during the 2016 election for the DNC chair. Now we're being told he's a front-runner in their pr...
5 hours ago
0 Comments 1 Favorite

"I see all the ugly truth is being revealed from the royal commission on Banking, All trust and…"
6 hours ago

cheeki kea commented on Phyllis Maka's blog post No Title
"It looks grim to see the suffering their people are going through right out there in front of all,…"
7 hours ago

cheeki kea commented on Chris of the family Masters's blog post Coronavirus: run, here come the experimental drugs
"The weak and gullible will succumb to either the virus or the medicine made to stop it, either way…"
7 hours ago

Story at-a-glanceProphylactic aspirin use in adults over the age of 70 is potentially harmful,…See More
8 hours ago
0 Comments 1 Favorite

As I've shown in recent articles, the virus hunters have fallen far short of proving a coronavirus…See More
10 hours ago
2 Comments 1 Favorite

James Roberts commented on Doc Vega's blog post Robot Companion Coming To Your Town Soon
"Doc - That's why there are people like me, who can commit genocide without a second thought.…"
16 hours ago