British Member of Parliament (MP) Kemi Badenoch condemned critical race theory and the Black Lives Matter movement during a Tuesday speech before the House of Commons.

Badenoch, who is the UK’s Women and Equalities Minister and a member of the Conservative Party, delivered the speech in response to Labour MP Dawn Butler, who earlier had said black children are made to “feel inferior” and need “to be decolonised,” according to The Guardian. 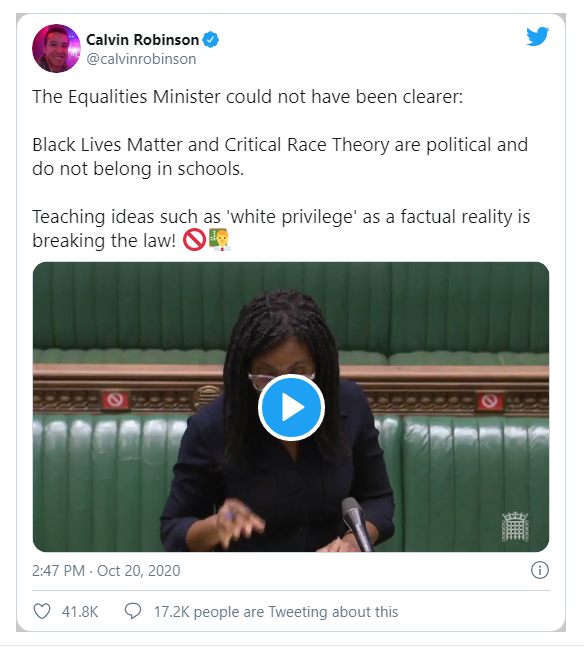 Badenoch, who is black, criticized the “teaching of contested political ideas as if they are accepted fact” before criticizing critical race theory as something the government stands “unequivocally” against.

Badenoch went on to criticize the Black Lives Matter organization as “anti-capitalist” and condemn its influence in British schools.

"queers &pedophiles infect and rule both sides of the filthy elites dems and repugs.This is just…"
53 minutes ago

Doc Vega commented on Doc Vega's blog post Juan O'Savin Reveals What Action Awaits the Criminals of the Voter Fraud
"This guy puts all the backlash waiting for all the perpetrators of the voter fraud! "
1 hour ago

steve replied to Daily Con's discussion Corbett Report: What NO ONE is Saying About The Lockdowns
"D C If you would take a look at the post I made at 12.35 and even placed James's name in the…"
1 hour ago

"Imagine all the pedophiles scurrying into shadows trying to cover their bare pimpled buttocks."
4 hours ago