To see such a shocking headline certainly turns peoples heads... And that is EXACTLY what the creator of http://bombiran.org  is hoping with his massive billboard sign recently erected in UTAH.

Since last week, a billboard has been up alongside I-215 in West Valley City that reads “Bomb Iran” in large red letters. But if you think this is a message provided and paid for by pro-war hawks, you should look closer. 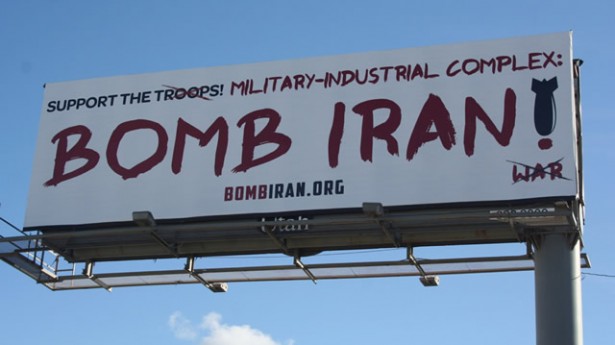 Above the large message, another line reads “Support the troops” with the word “troops” crossed out and replaced with “military industrial complex” a satirical jab at the power of war profiteers who benefit from the United States’ overseas conflicts. The billboard is turning heads, much more than a straightforward anti-war message ever would, says Connor Boyack, a local author who, along with D.J. Schanz, a local conservative activist, helped raise funds to put the billboard up.

“We didn’t want it to be an anti-war billboard that Utah conservatives would not think twice about and would just discredit as some liberal project,” Boyack says. That’s why he says the billboard was designed to shock, and also intrigue, viewers to check out the billboard’s Website www.BombIran.org. The site simply talks about the harm of overseas military campaigns. Boyack, who helped start the conservative group the Tenth Amendment Center and who wrote a book, Latter-day Liberty, discussing the compatibility of the teachings of the Church of Jesus Christ of Latter-day Saints and Libertarian politics, says the timing is right for the billboard as a growing cross-section of Americans of all political persuasions are growing weary of costly military operations and occupations.

"Yea let us not forget the criminal enterprise known as the C I A the HEROIN king of the world,…"
2 hours ago

"Yeah! There's a dose of reality for yuh!"
5 hours ago

"WTF is anyone with a brain thinking about American leadership at that summit?"
6 hours ago

"Damn that's funny but having this ass clown in office isn't!"
6 hours ago

"I believe this will go down as my all-time favorite."
10 hours ago