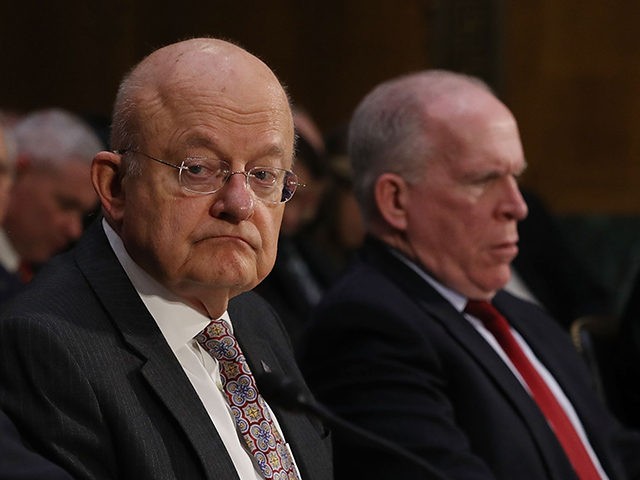 More than 50 former intelligence officials, led by Obama-era Director of National Intelligence James Clapper, have signed an open letter alleging that the newly-released Hunter Biden emails are “Russian disinformation” — even if they are real.

Clapper, who helped push the conspiracy theory that there had been “collusion” between Donald Trump’s presidential campaign and the Russian government, was joined by others — including former CIA Director John Brennan, who also promoted the Russia hoax.

Earlier this month, declassified documents suggested that Brennan had briefed then-President Barack Obama on a plan by Hillary Clinton’ campaign to accused Trump of close ties with Russia, in order to distract from her own scandals.

Politico broke the news of the letter Monday evening, giving it great importance: “More than 50 former senior intelligence officials have signed on to a letter outlining their belief that the recent disclosure of emails allegedly belonging to Joe Biden’s son “has all the classic earmarks of a Russian information operation.”

However, the intelligence officials seemed to show no concern for the possibility that the emails show that Joe Biden could be compromised by foreign powers — the same concern that ostensibly launched the investigation into Trump’s campaign.

[W]e write to say that the arrival on the US political scene of emails purportedly belonging to Vice President Biden’s son Hunter, much of it related to his time serving on the Board of the Ukrainian gas company Burisma, has all the classic earmarks of a Russian information operation.

We want to emphasize that we do not know if the emails, provided to the New York Post by President Trump’s personal attorney Rudy Giuliani, are genuine or not and that we do not have evidence of Russian involvement — just that our experience makes us deeply suspicious that the Russian government played a significant role in this case.

If we are right, this is Russia trying to influence how Americans vote in this election, and we believe strongly that Americans need to be aware of this.

Current Director of National Intelligence John Ratcliffe said Monday that the emails were not part of a Russian disinformation campaign.

Chris of the family Masters favorited Aaron's blog post Photographed at London Gatwick Airport in 2013... That is why they need this false pandemic...
2 hours ago

Phyllis Maka commented on Phyllis Maka's blog post Why the need for masks then? or toxic vaccines?
"You won't get anything from nasa or anyone else. They have this world locked down in their…"
4 hours ago

cheeki kea commented on Phyllis Maka's blog post Why the need for masks then? or toxic vaccines?
"https://science.nasa.gov/science-news/science-at-nasa/2008/30oct_ftes  This is the portal sun…"
6 hours ago

cheeki kea commented on Phyllis Maka's blog post Why the need for masks then? or toxic vaccines?
"Phyllis there is Very little info out there about any of this, but there is some which makes me…"
6 hours ago