Exposé: Who And/Or What Is Backing The Anti-Brexit ‘Renew Britain’ Political Party?

Exposé: Who and/or what is backing ‘Renew Britain’?

We have a fresh new UK political Party in our midst, which is targeted at ‘You and all the people of the United Kingdom – across regions, generations, professions, sectors, ethnicities. You might work in business or the public service, from any religion or ethnic minority, you might live at the top of a city tower block or a farm in the country, you might have a traditional education or relevant life experience or you could be just starting your career or beginning retirement. You could be a single working mother, trying to get by, or a young couple trying to afford a home and start a family’. The Slog investigates. 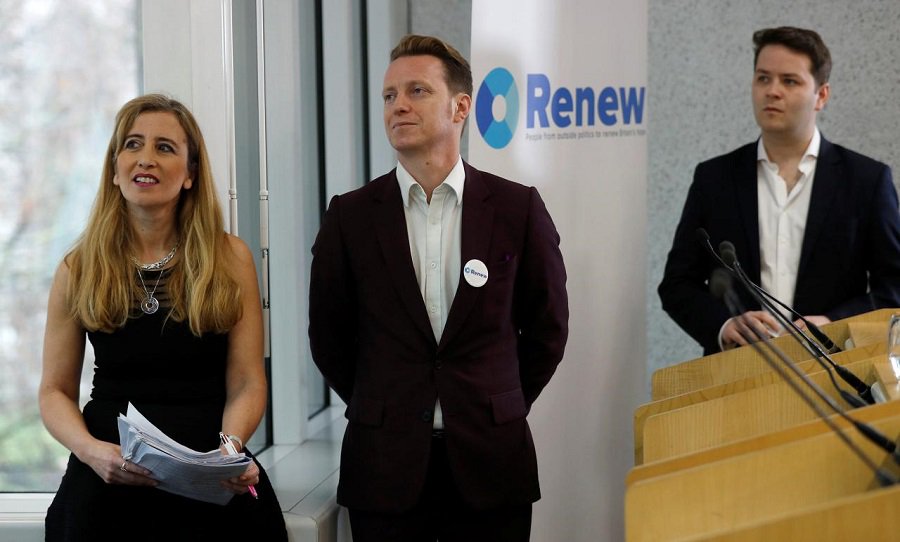 Do you like being patronised? Do you think Nick Clegg deserves a knighthood? Do you think Britain’s future lies with the introduction of spooks, NATO goons and former policemen into politics? Do you follow France en marche? Do you find yourself envying the brainpower of gnats?  Then Renew Britain is the Party for you.

Yes, Renew Britain is the new kid on the block – arrows all a-quiver and ready to be fired in the cause of, um, a vision and some fresh core ideas.

Blimey and Wowser. That one is straight out of Left field. I need to lie down and take it all in. This must be what they mean by Couture Schlock. Sorry, culture shock.

Some clues from the website. ‘About Renew Britain’ tells you nothing about where the money comes from; but it does tell you that there is a Gang of Three at the top of it:

James Torrance. He is either a dead Scottish professor or James Torrance Head of Strategy at Renew Britain. “We intend to be tough on Brexit and tough on the causes of Brexit,” he told the media earlier this week. He didn’t say that edukashun was Britain’s Princess of Hearts, but I was fully expecting him to.

James Clarke. Who he? Well, he’s leg two of the renewal stool who proclaimed at the launch that “Some of the anti-Brexit pressure groups and movements are very, very much focused on asking people to pressure their local MP to have a second thought on Brexit. What we are is almost the more military arm of that movement, whereas we are actually standing candidates in seats to threaten those MPs that are not changing their minds, or are not standing up for the views of their constituents.” So he’s like a sort of Sinn Fein candidate with the threat of military violence if things don’t go their way at the at the ballot box, with inappropriate use of ‘whereas’.

And let’s not forget Renew Britain’s founder, Chris Coghlan. Chris is either a well-known US utility baseball fielder, or the bloke who used to work as an anti-terrorist policeman cooperating with EU and NATO counterparts.

It seems unlikely to me that these folks came up with something so original, so fresh and so centrist paramilitary not really revolutionary and anti-Brexit as Renew Britain.

Somehow, I smell the distinctive odour* of Tony Blair, Lord Mandelson, Alastair Campbell, Nick Clegg, Guy Verhofstadt and George Soros in the background to all of this.

*French Sloggers may pronounce this word “ordure” if they so wish.

Soros' paying for it ALL.

Parrhesia replied to Less Prone's discussion Brazilian Military Stands with Bolsonaro – Is Prepared to Invoke Article 142 to Save the Nation (VIDEO)
"I hope this is true."
26 minutes ago

Less Prone left a comment for Gary McCurry
""Welcome to a revolutionary concept in public communication, the truth. Find your own sources,…"
2 hours ago

Gary McCurry is now a member of 12160 Social Network
3 hours ago
Welcome Them!

Parrhesia replied to Parrhesia's discussion Law Enforcement Buying "Anti-Scale" Fencing For Police Stations
"Years ago, when I went to Belfast, the fencing around the police station really made an impression…"
4 hours ago

Less Prone replied to Parrhesia's discussion Law Enforcement Buying "Anti-Scale" Fencing For Police Stations
"The people and the government are becoming two sides of a war."
4 hours ago

"I wonder when they get to transtranstrans and beuoynd. Is she joking or..., really?"
4 hours ago

Despite being banned under the UN Ottawa Treaty since 1997, thousands of anti-personnel mines litter the parks, streets, schools and homes in Donbass. Reside...
15 hours ago
0 Comments 0 Favorites

ralfy commented on Less Prone's blog post They Want a War - And a Big One
"The U.S. was targeting China because it did not anticipate the point that the poked bear would lash…"
20 hours ago

Doc Vega commented on cheeki kea's blog post right wing Meds for a left wing world.
"I wish soma was the method they were going to use instead of mass depopulations, destruction of our…"
22 hours ago

Doc Vega commented on youhavetoforgiveme's blog post I'm preaching to the choir for the regulars here at 12160.info but.....
"Great commentary Cheeki! I wrote about this back in 2012. The big question why were there also well…"
22 hours ago