Lin Wood and Sidney Powell have both been promising big things would be happening in Georgia very soon. It looks like Lin Wood has dropped his first bobmshell tonight.

100 Percent Fed Up – In a surprise, late-night tweet, Attorney Lin Wood, who’s been warning Georgia Governor Brian Kemp (R) and GA Secretary of State Brad Raffensperger that he’s coming after them and that he’s got the goods, laid down the gauntlet. In his first tweet in a series of tweets, Wood tweeted:

Would someone ask my never-to-be friend Brad Raffensperger @GaSecofState if he has seen this tape of election fraud at State Farm Arena in Fulton Co., GA?

Several people have seen it. Many more will see it soon.

Video camera eye does not lie.

How do you spell Election Fraud?

Wood included two images of a subpoena for Atlanta Hawks VP Scott Wilkinson from the US District Court with GA Secretary of State Raffensperger listed as the Defendant. 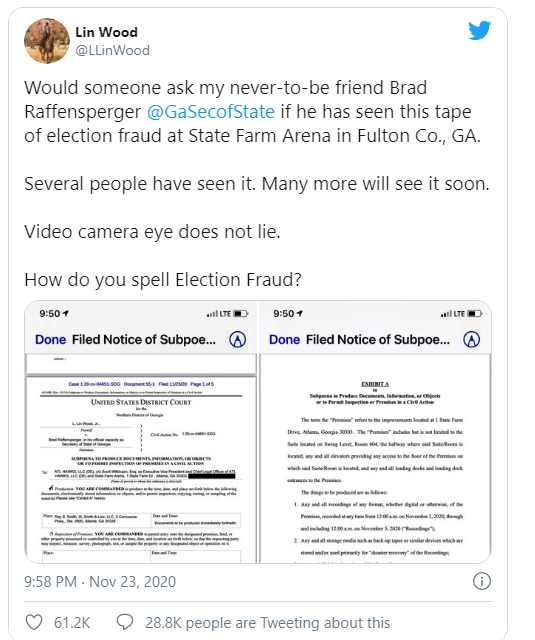 What really happened in Georgia when the water main reportedly broke causing a delay in the election counting in the state?

The Gateway Pundit was first to report about the “water main break” in the Atlanta Hawks State Farm Arena – On election night in Georgia President Trump was running away with the Presidential election, then suddenly it was reported that vote counting had stopped in Fulton County due to a water main break in Atlanta.

Nearly 40,000 absentee ballots will not be counted for the state of Georgia until at least Wednesday after a water main break, Fulton County officials said.

According to officials, a water main break at State Farm Arena caused a pipe to burst. The burst pipe was discovered around 6 a.m. Counting of the ballots began at 11 a.m.

According to CBS WVLT8 ballots in Georgia would not be counted due to a water main break:

Nearly 40,000 absentee ballots will not be counted for the state of Georgia until at least Wednesday after a water main break, Fulton County officials said.

According to officials, a water main break at State Farm Arena caused a pipe to burst. The burst pipe was discovered around 6 a.m. Counting of the ballots began at 11 a.m.

WVLT8 also released a statement from the Secretary of State related to the incident:

Tonight Fulton County will report results for approximately 86,000 absentee ballots, as well as Election Day and Early Voting results. These represent the vast majority of ballots cast within Fulton County.

One Georgia resident, attorney Paul J. Dzikowski, attempted to obtain more information on the reported water main break in Atlanta.  He sent a letter to and requested any information related to the water main break under the Georgia Open Records Act.  This is what he wrote in his request:

Please accept this correspondence (and the attached letter) as a request for production and inspection of records under the Georgia Open Records Act, O.C.G.A. § 50-18-70, et seq. (the “Act”). Please produce, for inspection and copying, the following records:

• ALL “Public records” related to the burst pipe at State Farm Arena that occurred on or about November 3, 2020, which impacted the counting of ballots by Fulton County authorities, including and not limited to internal and external communications with any person(s), communications with Fulton Co. Board of Registrations and Elections, memoranda, notes, work orders, requisitions, invoices, repair records, and all other public records.

This request is intended to be as comprehensive as possible and should be interpreted as broadly as the law allows, in accordance with the Act, and shall encompass records in paper form and any electronic and digital format. I look forward to your prompt response as soon as the records are available for inspection and copying but in no event more than three (3) business days following your receipt of this request, as required by the Act.

In response the only public records generated as a result of the alleged “burst pipe” that halted the counting of ballots in Atlanta (Fulton Co.) were a few text messages.  These messages were with the Sr. Vice President of the Atlanta Hawks, Geoffrey Stiles, who called it a “slow leak” that was “contained quickly,” and he said the entire thing was “highly exaggerated.”

Nobody gave me anything, card or not

And in doing so, give them all the information they want

There's a lot of indoctrinated people out there

"They exist in a different reality."
11 hours ago

There's a lot of indoctrinated people out there

YEAH. And, engines melted inside of nearby parked cars

YOU Are Not and Then You Are,unlearn their useless indoctrination to be mentally free

Old Denmark commented on Chris of the family Masters's blog post Troops to forcibly vaccinate people
"Until the feeble serfs understands that government, police, army and other public servant roles,…"
12 hours ago