Failure of US two party system evidenced by Obama re-election 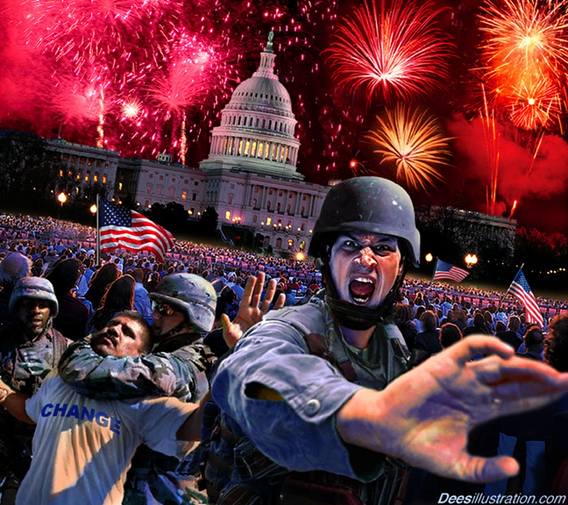 These last four tumultuous years under the Obama administration came to fruition Tuesday night when once again Barack Hussein Obama was elected again. In the face of 4 years of continued economic decline, unacceptably high unemployment, and lawlessness within the government itself, the people supposedly voted for another term for the President.

With Obama clearly violating the US Constitution and deploying US forces under French leadership in the Libyan overthrow without prior consent of Congress, the President should have been impeached. Dennis Kucinich, a Democrat, even introduced the bill in Congress, but the Republicans didn’t bite. The President went unpunished.

People such as Sheriff Joe Arpaio and his cold case posse labored for a year proving along with findings by expert Doug Vogt, that the President’s birth certificate was a fake, an electronically manufactured fraud. The President should have been brought up on charges of falsifying a federal document, obstruction of justice, and becoming ineligible as President of the United States of America as he did not satisfy being able to prove he was a natural born citizen as required by the US Constitution. Once again Republicans refuse to act on the evidence. The fix is in.

During the first 4 years of the Obama presidency in December of 2010 a string of consecutive NDAA legislation emerged that gave the US president dictatorial powers in the supposed event of a national emergency. S.1867 legalized the indefinite detention of suspected terrorists without a trial or evidence being introduced so that the due process of law could be denied to defendants. Violation of the Posse Comitatus Act that prohibited the use of the US Army to quell civilian unrest or domestic problems, was included in this legislation.

The National Defense Resources Preparedness Act conveys draconian powers to the President who can determine by himself or by conferring with the Secretary of State whether or not they think a state of emergency actually exists. In such a case, the President, and the President alone can martial all resources, utilities, fuel, trucking, roads, bridges, human assets, the armed forces, and communications to be used for whatever mobilization or purpose he sees fit.

HR 347 Prohibiting of any protest and demonstrations within the proximity of the Secret Service, supposedly to protect important White House officials and the President, but there’s just one little problem. The Secret Service is everywhere and a broad brush stroke of interpretation of legal action could easily be applied to fit any situation. This act essentially nullifies our First Amendment rights.

HR 3534 The Clear Act began as an overzealous reaction to the Deep Water Horizon oil spill in the Gulf of Mexico, in itself, suspect as being a Machiavellian act that gave authorities a reason to unleash more draconian legislation under the aegis of environmental considerations, but once one begins to look at the UN implemented control and seizure of US territories and resources, you begin to understand just how badly our trust in our government has been rightfully compromised. Working in tandem with the long proposed agenda of the LOST Treaty of imposing UN control over American coastlines, territorial waters, and even the Great Lakes, US citizens have no idea what awaits them. This traitorous act hides under the aegis of being an advocacy for the utilization of US minerals and federally managed and owned lands for recreation, hunting, and other uses, but instead, administers the giveaway of US sovereignty to foreign influence.

President Obama signed an executive order to introduce Agenda 21 sustainable development into US society. This UN funded, researched, and promoted plan for all nations and the planet, first and foremost, values the planet earth over human life. The ultimate goal of this world government plan is to reduce the human population by 30 to 50% and return much of the inhabited and civilized land back to wilderness while forcing human habitation in restrictive existence in limited areas. Under the innocent guise of “Sustainable Development” US citizens would lose land ownership rights, be forced by foreign influence to comply with international law, and live a drastically reduced quality of life within “stack’em and pack’em” housing built by UN contractors without consumer protect. No warranty or liability for structural defects would exist on behalf of the occupants forced to dwell within them. As much as 50% of the US land area would be redesignated as wilderness area with human presence prohibited.

FEMA has been a source of concern for sometime now by experts who have evaluated the use of government revenues for the ambitious funding of internment camps that resemble the German stalags of World War II. These massive facilities seem targeted for use as future civilian holding facilities in the event of social unrest from such causes as economic collapse or some disastrous act of terrorism. In some case American citizens have stumbled upon old air bases or military camps where new FEMA facilities have been erected ad have been confronted and detained by foreign speaking soldiers who warned them not to tell others of their whereabouts. Even public school parking lots and land have been converted to FEMA holding facilities that can quickly be changed to emergency holding facilities for masses of people.

The failure of the American two party system can best be described as a corrupt government that under the guise of granting freedom under its very own US Constitution is in effect lying to its own citizens and selling them out. The re-election of President Obama only slaps us in the face as an insult to our collective intelligence making promises after 4 miserable years of decline. Despite the illegal and criminal vulnerabilities of President Obama fails to hold him accountable.

Right on Nathan!  I agree.  Thanks Doc, sharing this.

And you forgot to add Nathan, it's a Party that we're not invited to, as George Carlin would say ;)

Two-Party system? That's funny because all I see is an Oligarchy; one big centrist Party.

cheeki kea replied to Harry Thomas's discussion The Milkman Keeps Violating Zuckys Community Double Standards (parody) By TRUTH is HATE
"Thumbs up the milkman's onto it. It's sort of frog in the pot humour, starts out mild…"
30 seconds ago

"Number 1 tennis player in the world was deported for refusing to take the drug....."
14 hours ago

Despite having worked throughout the last 2 years, the UK government declared a diktat demanding all NHS workers submit to an unlawful mandate - in contraven...
21 hours ago
0 Comments 0 Favorites