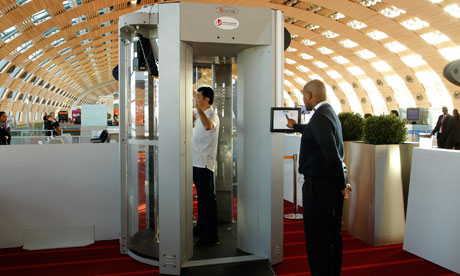 A federal appeals court that previously ruled the TSA’s deployment of body scanners as illegal and demanded the agency comply “promptly” with an order to hold public hearings on the matter has now backed off the issue, effectively allowing the TSA to continue to ignore its responsibility on the matter.

At the beginning of August, the court finally ruled after a year of inactivity that the TSA had until the end of the month to provide a reason why it has not held public hearings on guidelines for the body scanners.

The TSA claimed that there was “no basis whatsoever for (the) assertion that TSA has delayed implementing this court’s mandate.” (.pdf)

The agency has repeatedly cited “staffing issues” as a reason for the delay, and has claimed it cannot yet release documents pertaining to the rollout of the scanners and the decision that was taken in 2009 to make them the “primary” method of security in airports all over the country.

The TSA says it is awaiting approval from the Department of Homeland Security and the Office of Management and Budget in order to release the information to the court.

Yesterday, the court accepted these explanations and caved to the agency, allowing the TSA until the end of March 2013 to begin the public engagement process.

This means that by that time a full 20 months will have passed since the original court order, and almost four years will have elapsed since the agency officially rubber stamped the deployment of the machines.

The Electronic Privacy Information Center (EPIC), which originally brought the case, has attempted on no less than THREE occasions over the past 12 months to get the court to enforce the law on the TSA.

In its petition issued earlier this year, EPIC noted that the agency’s delay in acting poses risks to travelers, defies the Court’s authority, and is flat out unlawful.

The TSA had argued that it “should not have to stop every five minutes for comment and rulemaking”, and that it did not have the resources to do so in any case.

EPIC has previously argued in court that body scanners are “invasive, unlawful, and ineffective,” and that the TSA’s deployment of the devices violated the U.S. Constitution and several other federal statutes. The rights group is pursuing a case to completely suspend use of the scanners in airports.

EPIC has received support for its action against the TSA from The Competitive Enterprise Institute, which issued a brief earlier in the year that argues that the TSA’s claims that it does not have the resources to comply with the public rulemaking process are entirely bogus:

“Curiously, the obstacles responsible for the TSA’s delayed rule-making here do not appear to have forestalled the agency’s aggressive deployment of AIT scanners in airports nationwide.” it continued.

“This course of conduct is hardly indicative of an agency so starved for resources that it cannot comply with a straightforward judicial mandate within one year. Moreover, the TSA’s purchase of hundreds of new scanners after this Court’s July 2011 decision in EPIC suggests the agency intends to continue doing as it pleases without regard to public input or duly enacted laws.”

CEI and EPIC have also been joined in their calls by The Electronic Frontier Foundation (EFF) and The Cato Institute.

Jim Harper, the director of information policy studies at the Cato Institute, recently issued a petition to the White House on the matter.

However, just as the petition was set to reach a total of 25,000 signatures, at which point the President is obligated to publicly respond, it was mysteriously pulled from the White House website, never to return. Officials claimed the site had gone down for “maintenance” and then claimed the petition had expired during that time.

The federal government has invested close to a billion dollars so far into a fleet of 800 scanners, and the TSA has outlined plans to buy nearly 1,000 more in the next two years.

The TSA is continuing to roll out more full body scanners in airports across the country despite the fact that a recent Congressional report concluded that the agency “is wasting hundreds of millions of taxpayer dollars by inefficiently deploying screening equipment and technology to commercial airports.”

Another recently discovered Homeland Security report noted that federal investigators have “identified vulnerabilities in the screening process” involving the scanners.

The reports provided a basis for renewed investigation of claims made in March by Engineer Jon Corbett who posted a video of himself demonstrating how the body scanners can easily be bypassed.

The TSA initially responded to the revelations, describing Corbett as “some guy” who had launched a “crude attempt to allegedly show how to circumvent TSA screening procedures.”

The agency failed to even address the fact that Corbett had proven the body scanners could be easily defeated, and then it threatened journalists not to cover the story.

Corbett has continued his efforts to expose flaws in the body scanner program by interviewing TSA whistleblowers who have admitted that the scanners routinely fail to pick up prohibited items such as knives, guns and powder designed to resemble explosive material. Corbett also recently testified in a congressional hearing on the scanners.

As we have previously noted, multiple other security experts have gone on record saying that the scanners are ineffective.

Steve Watson is the London based writer and editor for Alex Jones’ Infowars.com, and Prisonplanet.com. He has a Masters Degree in International Relations from the School of Politics at The University of Nottingham in England.

"It's difficult to know what is going down at any one time. This morning I was reading our…"
3 hours ago

Doc Vega commented on Doc Vega's blog post PBS Attorney Caught Saying He's Glad Covid 19 Killing Trump Supporters and They Out to be Put in FEMA Camps!!!
"You know exactly why we have a problem in America when your own countrymen are this disgustingly…"
10 hours ago

"Very interesting. Last hooray or something of substance....?"
10 hours ago

Larry Flinchpaugh commented on Larry Flinchpaugh's blog post Troop Deployment in DC and the states
"If Trump declares Martial Law, the traitors will be tried in a military court without any…"
10 hours ago

"In my opinion, the courts have shown they no longer function under the Constitution and this has to…"
11 hours ago

Doc Vega commented on Aaron's blog post BREAK BREAK LIN WOOD We Have 250,000 China Military on Our Borders
"I don't know where this came from other than supposedly the Communist Chinese offering to move…"
11 hours ago

"It does seem odd to me that Mr. Lindell would be walking around outside with he notes exposed so a…"
12 hours ago

Twilight Zone commented on Daily Con's blog post 'Q-Anon' Bears Striking Resemblance to Bolshevik Psy-Op From 1920s Known As 'Operation Trust'
"It's impossible to tell if Q is a psych op or a psych op against a psych op.  Either way,…"
12 hours ago

"Mr. Lindell is a strong supporter of President Trump. He supported the President during the Covid…"
12 hours ago

Daily Con replied to Daily Con's discussion Mexican president López Obrador: 'Pandemic lockdowns are the tactic of dictators. Democratic leaders, fundamentally, must guarantee liberty'
"The Mexican President is the only Western leader to actually speak out against the lockdown…"
12 hours ago