Five dead, others 'gravely injured' in shooting at Capital Gazette newspaper in Annapolis

At least five people were killed and several others were “gravely injured” in a shooting Thursday afternoon at the Capital Gazette in Anne Arundel County, authorities said.

A shooter is in custody, police said. Police would not name the suspect or say what type of weapon was used.

Anne Arundel County Police initially confirmed about 3:15 p.m. that they were responding to an “active shooter” at 888 Bestgate Road, where the newspaper’s offices are located. The Bureau of Alcohol, Tobacco, Firearms and Explosives also responded to the scene.

The Capital Gazette is owned by The Baltimore Sun.

Phil Davis, a Capital Gazette crime reporter who was in the building at the time of the shooting, said multiple people were shot, as others — himself included — hid under their desks. He said there was a lone male gunman.

“Gunman shot through the glass door to the office and opened fire on multiple employees. Can’t say much more and don’t want to declare anyone dead, but it’s bad,” Davis wrote on Twitter as he waited to be interviewed by police.

“There is nothing more terrifying than hearing multiple people get shot while you’re under your desk and then hear the gunman reload.” 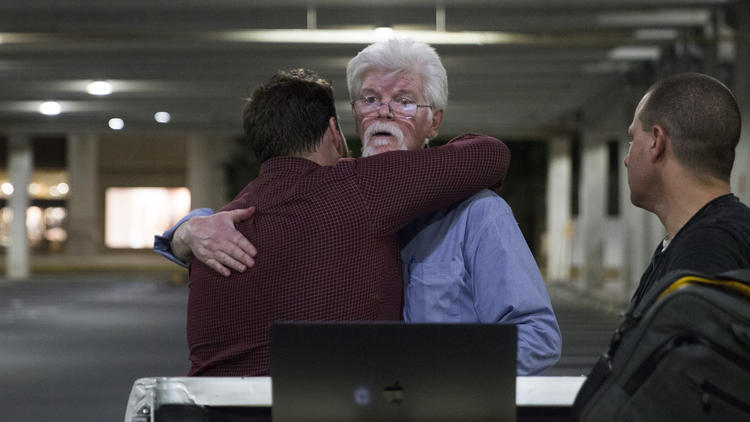 A shooting has occurred at the Capital Gazette in Anne Arundel County, a paper that is owned by The Baltimore Sun, according to reports from Gazette staff.


In a subsequent interview, Davis said it “was like a war zone” inside the newspaper’s offices — a situation that would be “hard to describe for a while.”

“I’m a police reporter. I write about this stuff — not necessarily to this extent, but shootings and death — all the time,” he said. “But as much as I’m going to try to articulate how traumatizing it is to be hiding under your desk, you don’t know until you’re there and you feel helpless.”

Davis said he and others were still hiding under their desks when the shooter stopped firing.

Police arrived and surrounded the shooter, Davis said. He declined to elaborate.

Authorities said police responded to the scene within a minute. "If they were not there as quickly as they were it could have been a lot worse," Annapolis Mayor Gavin Buckley said.

Agents with the ATF were on the scene in Annapolis to provide support to local law enforcement, said Amanda Hils, a spokeswoman for the federal agency. ATF can help with tracing weapons, conducting interviews and other assistance.

A White House spokeswoman said President Donald Trump was briefed on the shooting. Lindsay Walters, the spokeswoman, said “our thoughts and prayers are with all that are affected.”

Gov. Larry Hogan, on Twitter, wrote, “Absolutely devastated to learn of this tragedy in Annapolis.”

He said he was in contact with County Executive Steve Schuh, and that Maryland State Police were on the scene assisting county police.

“Please, heed all warnings and stay away from the area. Praying for those at the scene and for our community,” he wrote.

House Speaker Michael E. Busch has represented Annapolis since 1987 and said The Capital is “the voice of the community.”

Even with a shrinking staff, Busch said, “they knew the pulse of the community and had a lot of influence on what took place.

“This is a shocker,” Busch said. “Over the years, a lot of these people become friends. They do their job, you do your job, and you respect them for it. A lot of good writers have come out of there.”

“This is really something that is totally, totally shocking, that we don’t know how to understand.”

Sen. Chris Van Hollen wrote on Twitter, “My heart is with the families, friends, and loved ones of the victims as we learn more about this terrible situation. We must unite to end the violence.”

Police were also at The Baltimore Sun newsroom in Baltimore. Police said there was no threat on the Sun, and that their presence was a precaution.

Senior law enforcement sources briefed on the investigation told NBC News that the suspect, a white man wearing a black T-shirt and olive-green pants, had been identified through the use of facial recognition software. The sources said earlier that he had somehow obscured his fingerprints, making identification difficult.

A senior official said the suspect is 39 years old. Local authorities were preparing to execute a search warrant for the suspect's home. The suspect's name has not been released, but sources told NBC News that he is from Maryland.

Anne Arundel County Police Lt. Ryan Frashure said the weapon he used was a "long gun," but he did not elaborate.

Comment by Boris on June 28, 2018 at 7:19pm
Does anyone else think it is peculiar that there is a mass shooting on the day that Rosenstein has to testify to Congress?

Just happened & Stinks already... Suddenly FBI's gotten illegally involved, and they're not even supposed to be involved unless state lines crossed or national security compromised