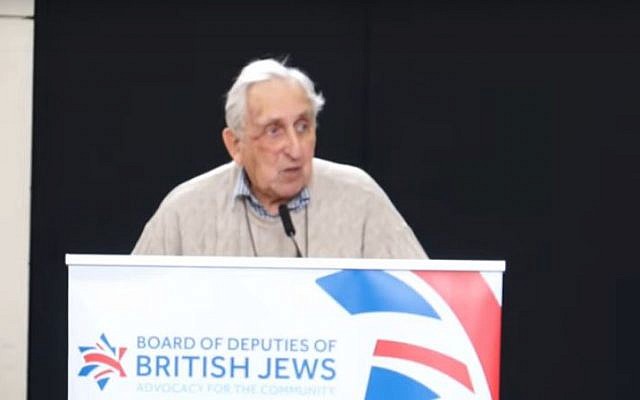 A former Board of Deputies president has apologised for suggesting Labour leader Jeremy Corbyn be “sacrificed for all the trouble he has caused.”

“The word Corbyn in Hebrew is Corban, which is sacrifice,” he joked. “I think we should sacrifice him for all the trouble he has caused.”

Dr Lionel Kopelowitz, 92, who was Board president from 1985 to 1991, addressed members at a meeting last Sunday.

He since apologised for his “clumsy rhetoric”, adding that he did not mean to suggest carrying out a physical attack on Corbyn.

“I deplore political violence and I am sorry that I phrased this so inelegantly,” Kopelowitz said. “I have been saddened and concerned to see increasing physical attacks on politicians, including Corbyn.

“I would hate for my own clumsy rhetoric to be erroneously understood as any sort of vindication of this alarming trend.”

“While […] I believe that Corbyn’s departure from his post would be in the best interests of Jews, anti-racists, the country and the Labour Party, I would want this to be by strictly democratic means.”

He added:  “We need to protect our precious democracy and mediate our disagreements through civil means.”

Also of interest, the video would not copy until I embedded it in the comment section.

I saw this over at Voat, in which Google buries Pizzagate Voat in search results. You have to go into the subverses to find Pizzagate Voat. Its home page is where news and the items of interest are. Thanks Google buries, wouldn't find a lot without having to manually go to Pizzagate Voat. I also saw how this was as the now defunct website The Ugly Truth Intelligent Anti-Semiticism called, How They Do It. In this example, is meaning, the use of media to spin a faux pas like this is done to express,'No, conspiracy and assassination is not what they engage in.' The Ugly Truth also went on about how the Torah was used as handbook for espionage. We can't forget By Way of Deceit, We Make War, the Mossad motto.