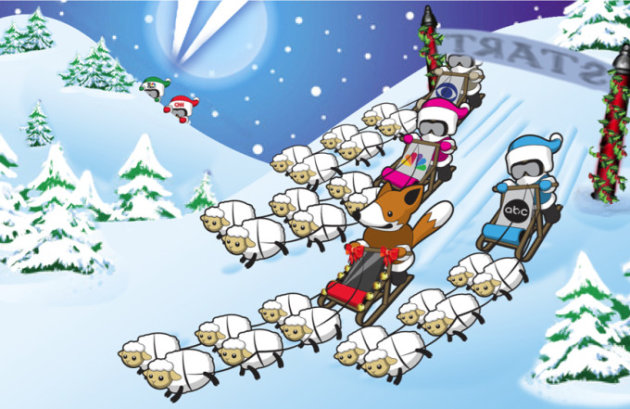 In what's becoming an annual media tradition, Fox News used its holiday card to wish friends and family well this holiday season--and take a swipe at CNN and MSNBC.

The front of Fox News' 2011 card--distributed to media journalists including this one--features a cartoon fox leading ABC, NBC and CBS in a sheep-sled race, with the jockeys for MSNBC and CNN watching from the sidelines. (The idea is that Fox News, the top-rated cable news network, is so far ahead, it's now competing against the the Big Three networks.)

(TLS)- LOL what can I say that you don't know after looking at this!

They have just total disdain for their idiot viewers, proof they are consciously deceiving their viewers and are laughing about it.

~ Funny one, for one fleecing moment there I thought this was a new post. ( 2 failed news participants on the sidelines watching, 3 left with face muzzles on in the race to the bottom to lead the sheep astray. ) It's clever that they make up stuff that can be recycled.

... also, it's interesting to note, that Shepard Smith was born, David Shepard Smith, Jr. Why the name change? Hmmm? Who better than a Shepard to lead the flock of sheep. Doesn't get anymore in your face than that. Ok, it's not funny anymore...

Ahaha. It's kind of funny if you think about it. It's like an inside joke between us and them. At least we can all laugh about it.

here is what is waiting at the finnish line;

....and laughing all the way to the bank I might add. They get paid well to deceive their viewers. Little do they know when the shit does hit the fan, the shits going to hit them too. All the time they've spent mocking and deceiving the American public, their controllers are mocking and deceiving them right back. What happens when their jobs are in jeapordy because no one can afford to pay for the propaganda on cable anymore and the dollar is equal to toilet paper? Or better yet.... Ron Paul as President.....hopefully? Let's see how funny it will be then.

"That thing is/was a man. Why ol why do the people tolerate these degenerate things, let alone let…"
12 minutes ago