A former Google employee exposes Google, already known to be discriminatory against conservatives and Christians now moves into high gear to influence the internet even working with our enemies to attain that goal. After the shock waves of President Trump’s victory in 2016 the owner of Google vowed to take steps to see that this could never happen again. Zach Vorhies, a Google employee says that shortly after the Hillary Clinton loss in 2016 Google hired an influx of mainland Chinese technicians who had connections with the Chinese government and the military. This secret work force invited to begin work on campus would begin a project to influence the internet toward socialism, the acceptance of Communism, and would even work alongside radical Islam in order to attain that goal.

The Google owner has fired two of his top executives, one for having donated to a Christian cause 10 years before, and another which he turned around in mid-flight to Europe so he could head back to Google headquarters and fire another upper level official simply for public remarks he made that seemed to veer away from the standard leftist stance of the company. Apparently Zach Vorhies considered himself to be in harm’s way if he should get caught working with Project Veritas, to expose Googles plans to influence the US government as well as public opinion. He had devised a “kill switch” in the event he was caught by his employer, which would be the release of a 950 page document detailing just what Google’s intentions were.

Vorhies, was called in for a “Mental Wellness” checkup and investigated by the San Francisco police when his employer discovered what he had been doing. One might recall on the anniversary of D-Day that rather than acknowledge this important date in history Google chose to mention some trivial leftist cause to draw attention to. There is no doubt that Google has taken a militant stance against any other ideology but their own! They are more than willing to take measures against anyone who reveals what their ultimate intentions are. Being the largest search engine on the planet after having put Netscape out of business gives them a lot of clout in having the capacity to shut off internet traffic to search topics they don’t agree with while steering that traffic to alternate leftist propaganda!

People underestimate the hostility of the left because the Democrats have done such a superlative job of blaming Republicans and conservatives for exactly what they are doing. Ask Seth Rich, who leaked information about Hillary and the DNC’s illegal activities after he was gunned down in the middle of the street shortly after he was discovered leaking. Is it little wonder that Zach Vorhies took measures to protect himself in the event he was uncovered as revealing the leftist agenda of Google? Vorhies paid a high price for exposing his employer making a $260,000 a year income including his stock options with the company. Yet, he chose to inform the American people about the sinister efforts to undermine the US Constitutional system of government. He knew he would lose his job as a result of his efforts. 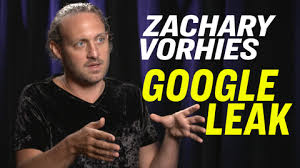 Raz this shit is absolutely diabolical. George Orwell was spot on!

"That may be the prettiest face she has ever pulled."
53 minutes ago

cheeki kea commented on Chris of the family Masters's blog post An Anonymous Nurse Speaks Out: The RT-PCR Test is Totally Unreliable, It Does not Detect the Virus.
" You won't hear much truth at all about the false tests they've make people submit…"
2 hours ago

"Indeed, saw the vid, was funny as shit. Too bad someone couldn't have brought a marble bust…"
16 hours ago