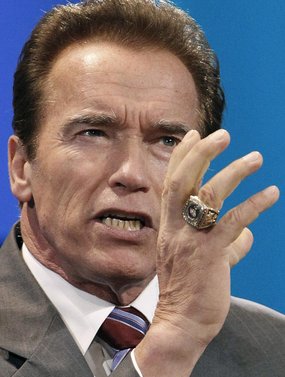 Arnold Schwarzenegger, who made a seamless transition from Hollywood film stardom to California governor, could have his sights set on a new job as next head of the European Union, US media reports.

The Austrian-born former body builder, 63, at loose ends as he tries to figure out what his next act should be, is reportedly being advised by aides to return to his native Europe to run for the EU presidency, Newsweek reports.

"In the next few years, the EU will be looking for a much more high-profile president - somebody who can unify Europe," Schwarzenegger's chief of staff, Terry Tamminen, told the magazine.

"The French won't want a German, and the Germans won't want an Italian. How about a European-born person who went off to America and - could return to be the Washington or Jefferson of a new unified Europe?" said Tamminen, all but nominating his former boss for the job.

Comment by fireguy on April 21, 2011 at 9:41pm
Go the hell back where you came from you NEO CON, Nazi, Slime-inator.  What a POS, Europe deserves the amount of tyranny they will put up with just like us.  Good riddance.

Doc Vega commented on Patrick C Conway's blog post What is going on with 12160?
"Les Prone,  There is a lot of historic revision going on right now and it's been going on…"
58 minutes ago

Donald Trump Jr. issued a dire warning on the threat of vaccine passports. Trump Jr. said that Democrats were going to try and use them to track Americans.
3 hours ago
0 Comments 0 Favorites