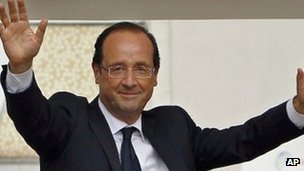 He got about 52% of votes in Sunday's run-off, according to projections based on partial results, against 48% for centre-right incumbent Nicolas Sarkozy.

Mr Hollande would be the first French socialist president since 1995.

Analysts say the vote has wide implications for the whole eurozone. Mr Hollande has vowed to rework a deal on government debt in member countries.

Hollande, yet another NWO whore...

François Hollande: the choice of 'last resort' for French expatriat...

Getting rid of the competition (DSK) and having his '9/11' moment still couldn't save the Sarkozy presidency.