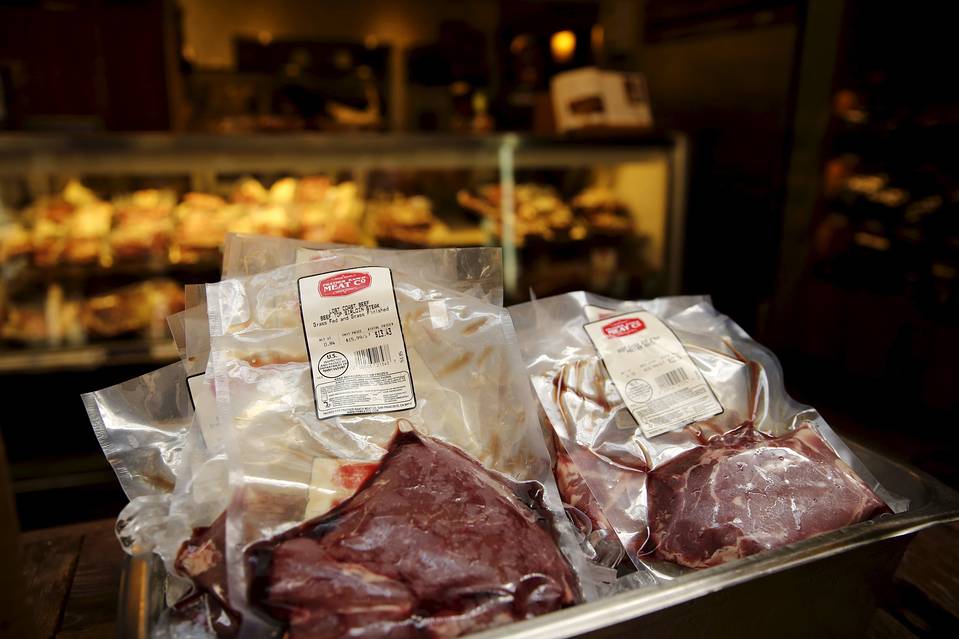 Country-of-origin labels were mandated by Congress in the 2002 and 2008 farm bills. They require meatpackers to identify where animals are born, raised and slaughtered. Photo: Reuters


The House voted late Wednesday to remove country-of-origin labels on beef, pork and chicken sold in the U.S., hoping to prevent a protracted battle over the labels with Canada and Mexico.

Wednesday’s 300-131 vote repealing the country-of-origin labels for meat follows a series of rulings by the World Trade Organization finding the labeling discriminates against animals imported from Canada and Mexico.

Canada and Mexico won a final WTO ruling in May, and are now seeking retaliatory actions valued at a combined $3.7 billion a year. Canada has threatened trade restrictions on a range of U.S. products, including meat, wine, chocolate, jewelry and furniture.

Capital Journal is WSJ.com’s home for politics, policy and national security news.
Surprise Bills for Many Under Affordable Care Act
Clinton Plans to Show Her Roots in Rally Speech
Bush Avoids Romney Moment With Clear Purpose on European Trip
Clinton’s Donor Dominance Not Certain as O’Malley Gains
Obama’s Trade Agenda Faces Crucial Votes in House
.
Supporters of the House bill said a repeal of the labeling law is the only way to prevent retaliatory measures that could affect several U.S. industries.

“If COOL worked, perhaps there would be a response other than repeal,” said House Agriculture Committee Chairman Mike Conaway (R., Texas), the sponsor of the bill. “But the fact is COOL has been a marketing failure.”

Country-of-origin labels, known as COOL, were mandated by Congress in the 2002 and 2008 farm bills, and require meatpackers to identify where animals are born, raised and slaughtered. The information is then printed on meat packages sold in grocery stores. The labels aren’t required on meat sold in restaurants.

In 2014, the U.S. imported more than 2 million head of cattle from Canada and Mexico and brought in nearly 5 million hogs from Canada.

The House’s vote in favor of repeal moves the fight about origin labels to the Senate, where key members remain divided on the issue.

Senate Agriculture Chairman Pat Roberts (R., Kan.) has showed a strong interest in a repeal, but the top Democrat, Sen. Debbie Stabenow of Michigan, said Wednesday that she will oppose efforts to get rid of them altogether.

Chris of the family Masters posted discussions
52 minutes ago

Chris of the family Masters favorited Aaron's blog post Photographed at London Gatwick Airport in 2013... That is why they need this false pandemic...
6 hours ago