Image from Panoramio is by Juraj Misina

Architects and designers  have always been been inspired by pyramids and several pyramid shaped buildings exists all over the World. However, the architects in Bratislava, Slovak Republic went one step further and designed an interesting inverted pyramidical shaped building for the Slovak Radio.
The building known as 'Slovenský Rozhlas' (Slovak Radio Building) was designed by Stephen Svetko, Stephen Ďurkovič and Barnabas Kissling. The project work was started in 1967 and construction was completed only in 1983.
The building houses contains concert hall and recording studios for the Slovak Radio and has fifteen floors with a total height of 61 metres upto the roof and maximum width of about 74 x 74 metres square. There is another inverted pyramid at St. Petersburg Pier, Tampa Bay, Florida. However it is smaller than the Slovak Radio Building. View location in Google Earth  Google Maps and Street View
Although there are several other buildings whose upper floors are larger than the lower ones, but I am not aware of any other building, except the above two, which is a true inverted pyramid. May be my readers can help me in finding some more of these inverted buildings.
The famous inverted pyramid of Louvre is not a building in true sense. It is only a skylight for an underground shopping mall in front of the Louvre Museum. (Source: Wikipedia) 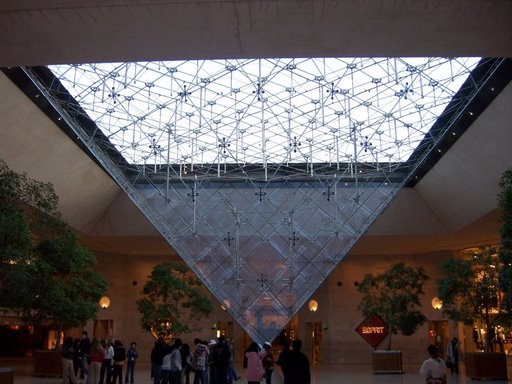 Image from picasaweb is by Jill

The Canadian pavilion at the Montreal 1967 International and Universal Exposition - Expo 67 was also a big inverted pyramid. However it was only a temporary structure and has since been dismantled. Credits: I am thankful to reader Downes for providing info about the Expo 67 inverted pyramid and sending the link of above image. Thank you Downes.

Serendipity brought me today to another inverted pyramid shaped building.
The City Hall of Tempe, Arizona, USA designed by local architects Michael and Kemper Goodwin is another example of inverted pyramid. The building is 3 storey high and its roof measures 126 feet (~ 38.4 metres) on each side.
Completed in 1971, its inverted pyramid shape was designed to conserve energy by allowing less light into the building.  In 1971, it received an award of excellence from the American Institute of Steel Construction, and in 1972 received an award of merit from the Western Mountain Region of the American Institute of Architects. I agree Chris of the family Masters re: space saving - clever idea as long as the outer sides can still be free of whatever is built next to it.  I also like the idea it's the majority on-top as opposed to the verso.

Comment by Chris of the family Masters on August 21, 2018 at 7:03am
From the practical point of view it's got much smaller footprint that traditional buildings. Space saving?